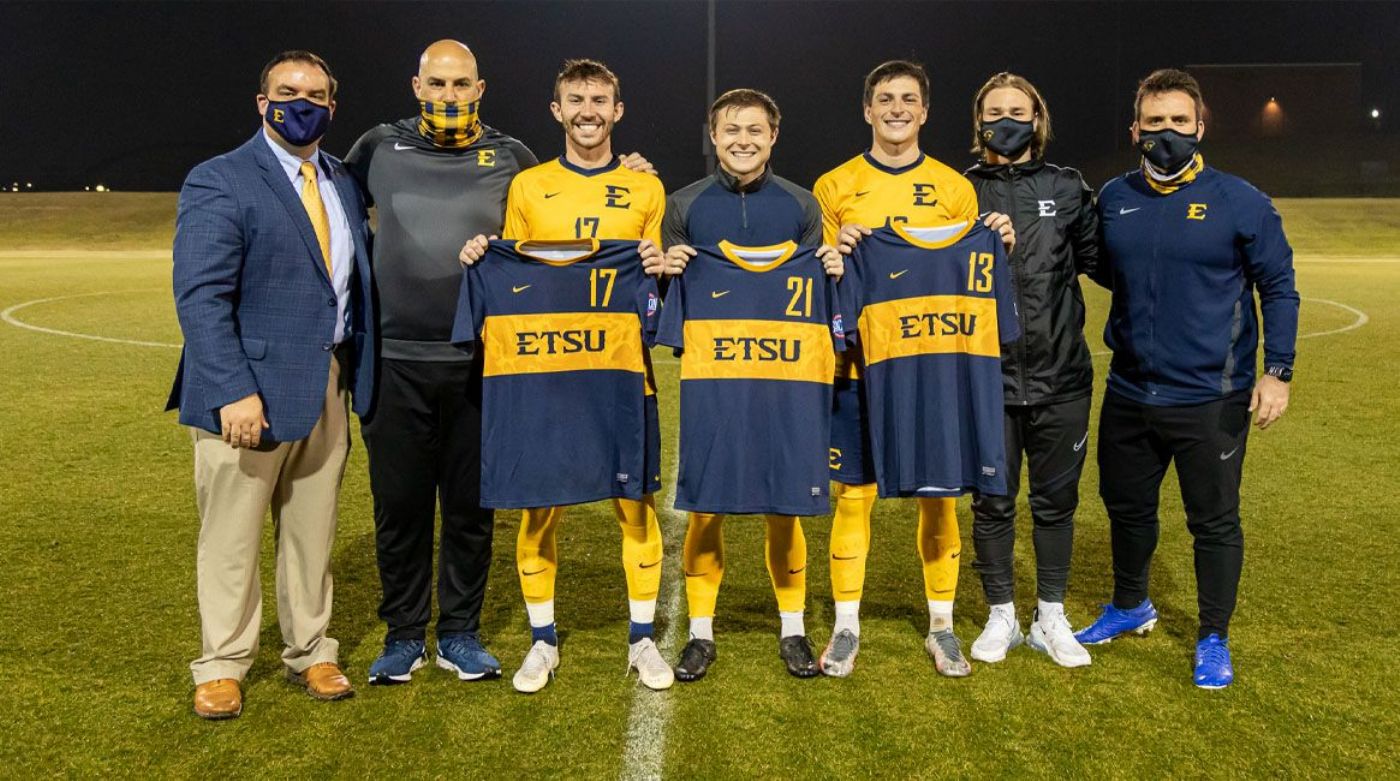 JOHNSON CITY, Tenn. (Feb. 27, 2021) – Despite many attempts that threatened goal, the ETSU men’s soccer team found itself forced to settle for a draw on Saturday evening against VCU.

Celebrating three seniors prior to tonight’s match, Josh Denton (Knoxville, Tenn.), Austin Bihlmeyer (Knoxville, Tenn.) and Jordan Broadwater (Kingsport, Tenn.) all played a big role in the evening, but were unable to break through for the first Buccaneer win of the season.

With the ball skidding across the pitch and players sliding through challenges, the two sides spent the first half acclimating to the rough conditions inside Summers-Taylor Stadium. ETSU sent a wave of shots in the second, outshooting the Rams 10-4 in the second half with a couple chances that were nearly cause for celebration. The two sides would eventually settle with nothing separating the two.

For the first time this season, the Bucs put double-digit shots up on the night. ETSU outshot the Rams 13-9 on the evening.

Six yellow cards were issued on the night, four siding with the Blue and Gold.

22 fouls were called on the evening, the Bucs being whistled for 13 compared to the nine for VCU.

In an rain-soaked affair at Summers-Taylor, both sides spent the opening half trying to find a rhythm with the speed of the turf. It would be the hosts with the best chance of the half, as Kieran Richards (Hamilton, New Zealand) picked the ball up 15 yards out and curled an attempt to the far right netting. VCU keeper Mario Sequeira matched his attempt with an outstanding save to keep the Rams level. The half ended with either team attempting two shots, only the one threatening the keeper.

Richards, who only had one attempt entering tonight, tested Sequeira twice more in the opening five minute of the second half, the VCU man equal to the task. Josh Perryman (Sheffield, England) was called into the game for the first time in the 63rd minute, making an easy save to deny Celio Pompeu.

Only minutes later, the Bucs created the best opportunity of the night through the man on a mission, Richards. After a cross seemingly sailed over his head, Richards leapt and was able to connect and send it towards goal, Sequeira planted on his line beaten as the ball bounced off the crossbar before Lucas Lightner (Clarksville, Tenn.) had his shot deflected out for the corner.

Another save for Perryman and a beautifully taken first touch by Tarik Pannholzer (Flensburg, Germany) ending with a wayward shot saw the time in regulation halt to zero, bringing about the first overtime for the Bucs this season.

In the 20 minute overtime period, only four shots were taken with neither keeper making a save, a last ditch opportunity from the Bucs halted by the center judge’s whistle as the night ended with a nil-nil draw.

The Bucs are back at Summers-Taylor on March 12th, taking on Furman in the 3 p.m. conference opener.