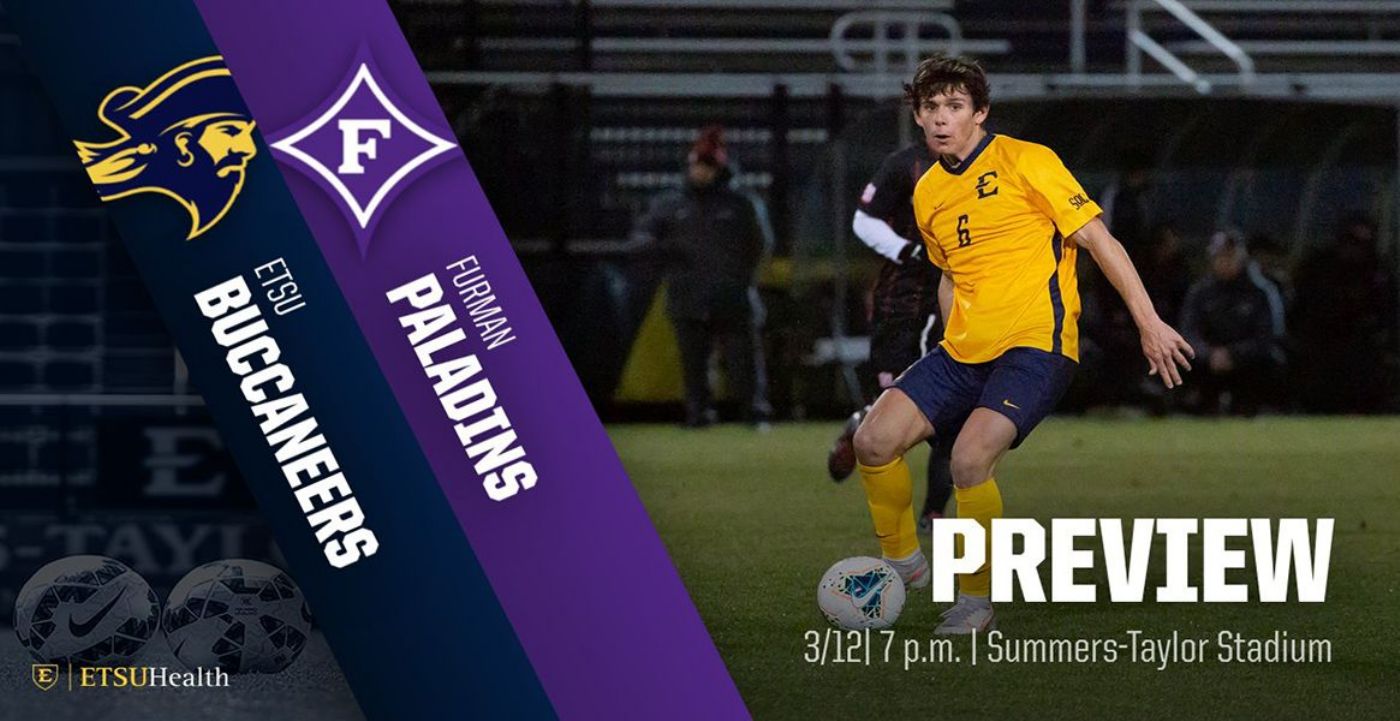 JOHNSON CITY, Tenn. (March 11, 2021) – The conference season is approaching, and the first test awaits in the form of reigning SoCon Regular Season champion Furman for the ETSU men’s soccer team. The Bucs host the Paladins in a 7 p.m. showdown on Friday inside Summers-Taylor Stadium.

With a slow start to nonconference play, the Bucs reared into a more fluid side in the last match against VCU, dominating play as the hosts were held out of the net in a 0-0 draw on senior night.

The Bucs are set for action on ESPN+ for Friday evening’s matchup against the Paladins. Mike Gallagher will be on the call for the contest.

Failing to register more than 10 shots per game in each of the opening three games of the series, the Bucs started to find their offense. In the draw against VCU, the Bucs tallied 13 shots to more than double their season total. Despite the onslaught on the Rams’ net, ETSU couldn’t find a breakthrough as each time the VCU keeper answered when called into action.

Kieran Richards (Hamilton, New Zealand), a Preseason All-SoCon selection, came to life last time out, leading the team with six shots after only producing one attempt all season. The sophomore had two efforts turned away by the fingertips of the VCU keeper before a header off the post kept the Kiwi midfielder off the score sheet for the first time of the season. Tarik Pannholzer (Flensburg, Germany) continues to provide a threat on the left side of the attack, contributing two chances in the contest. The Buccaneer backline recorded their first clean sheet of the season against VCU, led by captain Josh Hancock (Torbay, England) and sophomore Dominic Foster (London, England) in the central of defense.

Between the pipes, Josh Perryman (Sheffield, England) followed his career-high performance against Marshall, in which the redshirt junior recorded nine saves, with a clean sheet against the Rams. Perryman was only called into action twice in a relatively comfortable evening that secured his first shutout of the year. The Englishman looks to defend his SoCon Goalkeeper of the Year accolades, recording 14 saves and a .778 percentage early this campaign.

Entering their fourth game of the contest, the Paladins enter with a 2-1 record in non-conference play. Beating rivals South Carolina in 3-0 fashion, Furman took that momentum into Spartanburg, S.C. to knock off USC Upstate 2-0. The positive start hit a roadblock when facing Gardner-Webb on the road, three early second-half goals undoing the Paladin streak with a 3-0 loss entering SoCon play.

Shaun-Chris Joash and Jake Raine lead the Paladin line, each scoring twice and assisting once on the season for a team-high five points. Sam Miller leads the squad with two assists on the year, while Ben Hale makes his return to lead the Paladin backline from the net, deputizing between the sticks for Furman after missing the 2019 season with an injury. The senior holds a .700 save percentage, only recording seven saves in three games after recording two shutouts in three attempts.

The Greenville side hold the advantage in the series history, ETSU with just a 2-7-6 record against Furman. The Bucs haven’t knocked off the Paladins since the 2015 season, defeating Furman on the road in a 2-0 win. Four of the last six games have ended as a draw, three of them nil-nil. ETSU looks to improve on a 1-3-3 record at Summers-Taylor Stadium in the tie.