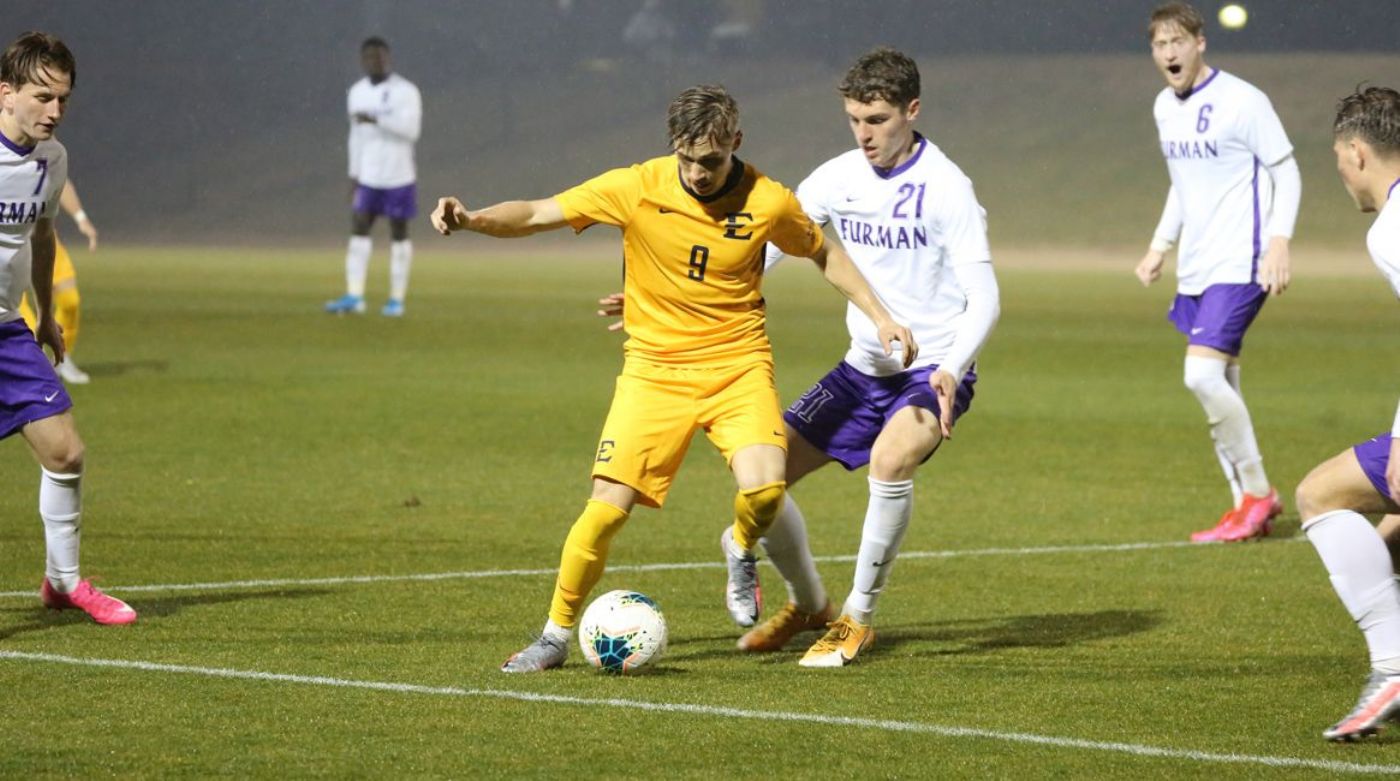 JOHNSON CITY, Tenn. (March 12, 2021) – A chippy, edgy battle awaited inside Summers-Taylor Stadium on Friday evening, one that saw Furman sneak past the ETSU men’s soccer team in a 2-1 double overtime score line under the lights.

With the rainy weather spending the day in Johnson City, the pitch at Summers-Taylor Stadium did just enough to hold up, with a quicker playing surface the only significant indicator of the inclement weather as the skies cleared up the more the game continued.

After a start that favored the visitors saw the Paladins go ahead with a goal midway through the opening half, the Bucs slowly grew into the game. The Blue and Gold dominated the second half, getting their deserved breakthrough with 10 minutes left on the clock in regulation on their search for an equalizer.

Despite the momentum turning towards the Buccaneers the majority of the game, Furman gained the last laugh after an audacious attempt on goal in the 106th minute gave the visitors the golden goal win with the last kick of the game.

For the second straight time, the Bucs finished with double-digit shooting attempts, outshooting the Paladins 13-8. ETSU held Furman 70 minutes without allowing a shot between the 33rd and 103rd minute.

In a physical affair, the Bucs had just one more whistle with 15 fouls called compared to Furman’s 14. Five yellow cards were issued, three for the Paladins.

ETSU held a 9-4 advantage in corner kicks, scoring their first goal from a set piece in the 80th minute.

The English captain recorded his first goal in the Blue and Gold, and the first since scoring for Marquette on Oct. 23 against Butler.

The Paladins grabbed the first two shots of the game in the opening 15 minutes, the second forcing Josh Perryman (Sheffield, England) into action as the keeper reacted quickly to parry the effort from Cole McLagan out from a corner. The Bucs finally grew into the game minutes later, getting shots from Jared Leheta (Montreal, Canada) and Tarik Pannholzer (Flensburg, Germany) but were unable to direct them on goal.

The breakthrough for the Paladins came in the 24th minute. After a cheap giveaway in midfield for the Bucs, Josh Hosie found Jake Reine who had the time to put it on his preferred right foot and tuck his effort into the bottom left corner, giving Perryman no chance for the save. ETSU were held from collecting another shot the rest of the half, the sides entering the break with a 1-0 score in favor of Furman.

It didn’t take long for the ETSU offense to make an appearance in the early stages of the second. Dominic Foster (London, England) attempted a spectacular bicycle attempt, the shot travelling wide of the Furman post. The pressure continued as Lucas Lightner (Clarksville, Tenn.) trapped a scooped ball over the backline, firing a left-footed volley just over the bar.

The momentum continued to grow, and the Buccaneer faithful became livelier as chances kept coming for ETSU. After Kieran Richards (Hamilton, New Zealand) stepped up for a corner in the 80th minute, the sophomore swung in the ball to the oncoming path of Foster. His header beat the keeper and looked as if it was about to cross the line before Josh Hancock (Torbay, England) nodded it home to ensure the Buccaneer equalizer. After a late opportunity squandered by the Bucs with just seconds in the half, the game would go into ETSU’s second overtime match in as many games.

After the opening 10 minutes in which ETSU recorded the only shot of either side, the second overtime period livened up. Combination play set up ETSU for their best chance for a winner just 40 seconds in, Furman goalkeeper Ben Hale proving equal to the task. Only minutes later, Furman mounted pressure of their own as Miles Fenton was given plenty of room to take an attempt on target from over 20 yards. The knuckling shot gave Perryman fits, the keeper able to get his shoulder to the attempt as the follow up was blocked by an ETSU defender. The visiting pressure paid off as Dylan Lane drove down the left side and swung a cross in. Reine scored his second of the evening, his acrobatic finish giving the Paladins all three points to secure an opening win in SoCon play.

The Bucs head on the road for their first road action in conference, meeting the Mercer Bears on March 16 in a 7 p.m. kickoff.