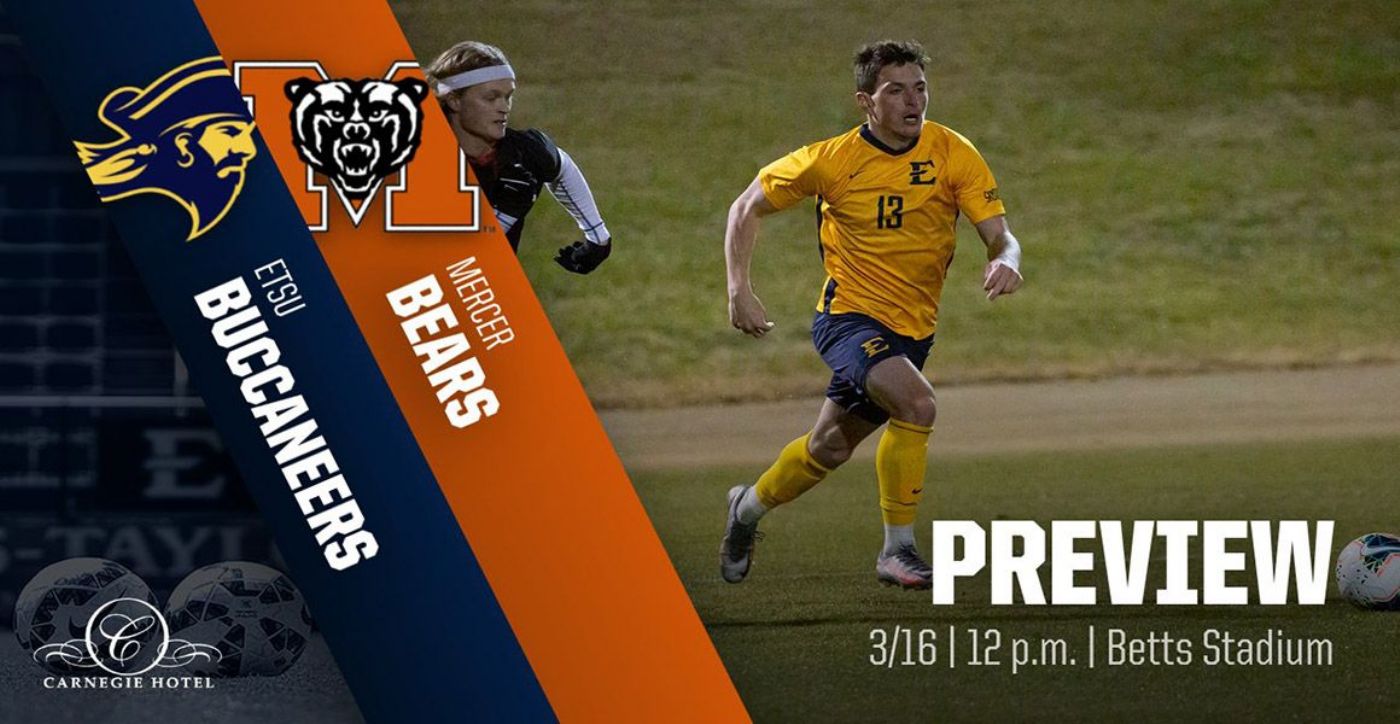 ETSU begins its SoCon road campaign against the Bears

JOHNSON CITY, Tenn. (March 15, 2021) – The ETSU men’s soccer team packs its bags and heads to Georgia, facing Mercer in the first SoCon road game of the season when the two teams meet at Betts Stadium on Tuesday afternoon.

The Bucs come off a tough Friday loss to Furman in Johnson City. After allowing an early goal to the Paladins in the SoCon home opener, the Bucs dominated in the second half, not allowing a shot from Furman before grabbing a late equalizer to force the game into overtime. Despite the momentum in favor of the Blue and Gold, the Paladins were able to grab a goal against the run of play in double overtime to walk out with the three points at Summers-Taylor Stadium.

The Bucs are set for action on ESPN+ for Tuesday’s noon matchup against the Bears.

The Bucs have had an offensive revelation the past few games. After only registering 12 shots in their opening three games, ETSU has attempted 13 and 15 shots in their last two. The Bucs will be on the search for the final product however, only grabbing one goal in the last two games.

Kieran Richards (Hamilton, New Zealand) tallied his first point of the season in the double-overtime defeat to Furman after grabbing 14 in his freshman campaign. The 80th minute Buccaneer equalizer came off the Kiwi midfielder’s corner attempt. Josh Hancock (Torbay, England) grabbed his first goal in the Blue and Gold, heading in the attempt from Dominic Foster (London, England) to ensure the Buccaneers leveled. The goal was the first scored inside Summers-Taylor this season, having been kept out the previous two matches. Josh Perryman (Sheffield, England) rank 34th in the country in saves per game, tallying four per match.

The only team to play in the fall, Mercer continue their season, entering at 2-6-1 on the year. Four of the six losses came to teams that are a combined 24-8-4, including a fourth ranked Kentucky they met in the fall. In their first SoCon matchup, the Bears scored an 82nd minute goal against the Spartans, but UNCG used a goal in the final 30 seconds of regulation to force the game into extra time, where it remained a draw after 110 minutes.

Dylan Gaither leads the scoring for the Bears from the midfield, tallying four goals and an assist in his sophomore campaign. Kevin Kim enters with two assists, the only Bear with multiple assists. Only four members of the squad have made a start in all nine games for Mercer this season. Between the sticks, Preseason SoCon Goalkeeper of the Year JR DeRose is favored to be in net. The redshirt senior has a 1.52 goals allowed average on the year, a .711 save percentage and just one shutout to his name entering the contest.

Little has separated the two sides meeting in Macon. Entering Tuesday’s contest, the Bucs enter with a 7-8-5 record against the Bears. Having won their last two against Mercer, ETSU looks to continue their trend. 35 goals have been scored in the series, the Bucs holding the edge 18-17, helped by allowing just one goal in the last six meetings with the Bears.