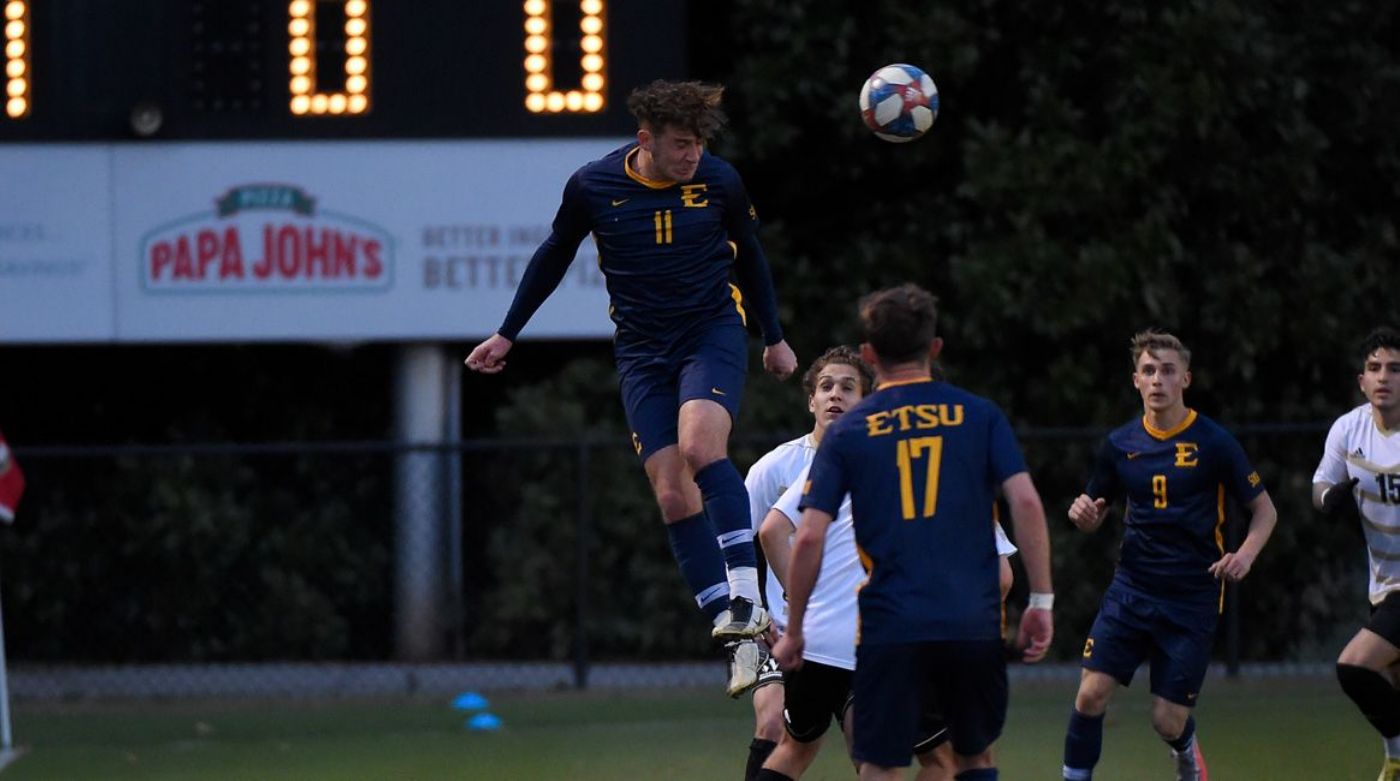 Three red cards, two goals between the two teams in the final 12 minutes sees the Bucs edge the Terriers, 3-2

SPARTANBURG, S.C. (March 20, 2021) – A classic tale of “It’s a game of two halves” unfolded in Spartanburg.
The ETSU men’s soccer team grabbed a vital 3-2 win on Saturday evening on the road against the Wofford Terriers, a wild finish encapsulating the crowd at Snyder Field.
With a contested battle in midfield and no significant chances to show for it 40 minutes in, an own goal out of nothing and a last second equalizer set the stage for a second half frenzy.
Grabbing a goal just on the other side of the second half, the Bucs must have imagined that the final 12 minutes of the game would be easy after a Wofford red card sent the hosts down to 10 men. Six minutes later, the task looked even simpler as another red card for the Terriers and a third Buccaneer goal gave ETSU a 3-1 lead with a two-man advantage.
The hosts weren’t done fighting, and after a Buccaneer man was sent off in the 85th minute, the Terriers grabbed a late goal to make things interesting. A late save from the Bucs and possession over the majority of the final five minutes saw ETSU walk out with their second win on the bounce.

The Bucs have now won six straight games against the Terriers after the 3-2 win. ETSU has won the last three against Wofford by a one-goal margin in each game.
A theme in the Terriers’ season, all five of their losses this year have been decided by a single goal.
After just two shots in the opening 45 minutes, the Bucs registered eight shots in the second half. ETSU finished the game slightly outshot by the Terriers 13-10. The Blue and Gold registered six of their 10 shots on target.
Jared Leheta scored the first brace of the season for ETSU, grabbing his second and third goals of the year.
Lucas Lightner scored his second goal in as many games, grabbing his second goal of his career. Both of the goals were game-winning tallies for the Blue and Gold.

Nearly ten minutes went by without a shot from either side before the hosts struck with an early opportunity. After playing service into the box after a free kick, the Terriers were first to react as Daan Snellink collected and fired a shot that squared off the left post and came back out. Wofford recorded the next four shots before Kieran Richards (Hamilton, New Zealand) flashed an effort wide right from just inside the box.
The hosts grabbed the opening goal with just five minutes left remaining in the half through an unfortunate Buccaneer break. A Wofford free kick saw a Buccaneer defender contend in the air with a Terrier attacker, winning the header but seeing the ball sail into the back of the ETSU net, giving the hosts the opening score of the game.
An immediate response proved on the cards for the Bucs just moments later. A piece of skill saw Josh Salinas (Stafford, Va.) drive brilliantly from his left wing position, beating multiple defenders before being clattered into. Aidan O’Brien (Asheville, N.C.) approached the ensuing free kick, bending in his cross into the box. Jared Leheta (Montreal, Canada) beat his mark and met the ball, heading his effort back into the near post to give the Wofford goalkeeper no chance of denying the freshman. With just 12 seconds left remaining in the half, Leheta’s effort changed the dynamic of the game as the Bucs were just seconds away from facing a halftime deficit.

The late goal in the first half seemingly gave the Bucs a jolt of energy, Dominic Foster (London, England) forcing Wofford’s Emil Larson into the first save of the game by either side just three minutes into the second half. Wofford sent a response of their own, Josh Perryman (Sheffield, England) being called into action with a clean catch just a minute later.
The energy increasing on Snyder Field, Leheta would catch the backline of Wofford napping. With the center back trying to maneuver past the forward, Leheta clipped the ball from his feet before striking a quickfire shot. Larson proved equal to the save, but the rebound came back to Leheta who made no mistake on the second bite as he rolled it into the back of the net to give the Bucs their first lead of the night.
Moments later, ETSU almost found a third through Tarik Pannholzer (Flensburg, Germany). After playing a quick give-and-go to unlock the defense, Pannholzer was on the end of a diagonal cross that put him in with just the keeper to beat. Larson came up big for the Terriers, diving well to his left to parry the attempt and keep the score within one.
An attack on the Buccaneer goal with just over an hour to play saw the Terriers put three shots up in two minutes. Perryman answered the only call asked of him, Adrian Roseth rifling a shot to the Englishman’s top corner, Perryman reaching up for a strong reaction save to retain the ETSU lead.
The Bucs imagined they must’ve done enough by the 85th minute, two red cards from the Terriers dropping them to nine men. Lucas Lightner (Clarksville, Tenn.) found the back of the net with five minutes remaining, tapping in from two yards out with no one around him after Foster towered over his defender and an outstretched Larson to nod the ball back into the middle after a free kick into Lightner's path.
Less than 30 seconds of game time later, a red card from Foster and a free kick goal from Wofford’s Roseth made the tie interesting again. The sophomore had a chance to equalize in the 87th minute, Perryman matching Roseth’s effort for his fourth save. The Bucs were able to keep possession the rest of the way, escaping Snyder field in a chaotic finish to take the bus back to Johnson City with two wins on their two-game road trip.

The Bucs return home for two-straight home games, starting with a crucial SoCon match against the Belmont Bruins on Tuesday, March 23 in a 3 p.m. bout.