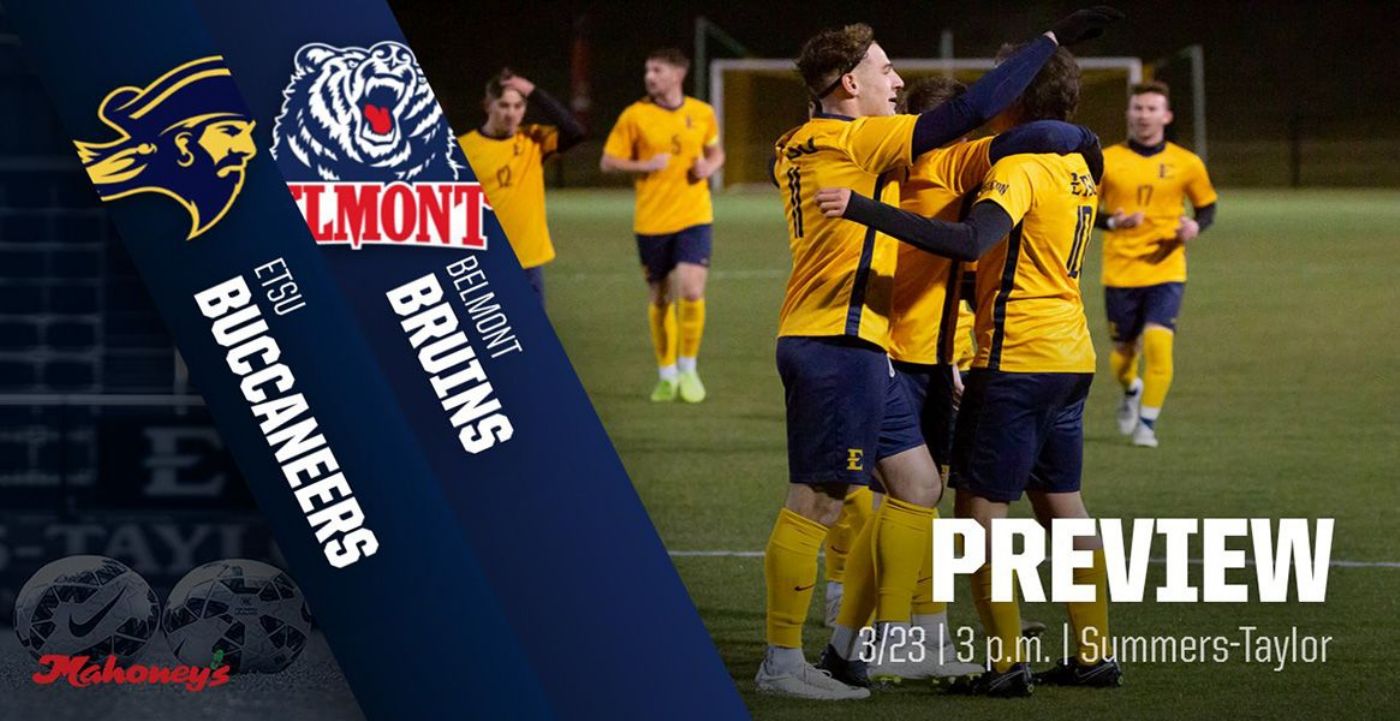 JOHNSON CITY, Tenn. (March 22, 2021) – Two of the hottest teams in the SoCon meet in a midday clash on Tuesday afternoon, the ETSU men’s soccer team hosting the Belmont Bruins inside Summers-Taylor Stadium in a 3 p.m. kick.

The two teams both enter with a two-game win streak in conference play, each side looking to extend that streak to all but ensure a place in the top four to qualify for the SoCon tournament at the end of the season. After falling to Furman (only other team in the conference with two-straight conference wins) in double-overtime, the Bucs have grabbed back-to-back road results against Mercer and Wofford to vault them up the SoCon table.

In their last time out, the Bucs had one of the most exhilarating games of the season on Snyder Field. After a Buccaneer own goal and an equalizer in the late stages of the first half set the stage, the final 45 minutes proved a spectacle for those watching. Capitalizing on an error just eight minutes into the second half, the Bucs grabbed a 2-1 lead. ETSU looked to be in cruise control after two Wofford red cards and a third goal seemed to put the game to bed with less than six minutes to play, but an 85th minute red card and goal for the Terriers made for a nervy ending in Spartanburg. Despite a near equalizer in the 88th, the Bucs were able to hold off the Wofford attack and walk out with a 3-2 win to improve to 2-0-1 on the SoCon campaign.

Belmont enters unbeaten on the year with a 5-0-1 record entering Johnson City. The Bruins come on the back of a 5-0 lashing of VMI after defeating Wofford 1-0 in their SoCon opener.

Media Central
The Bucs are set for action on ESPN+ for Tuesday’s midday matchup against the Bruins. Mike Gallagher takes the call on the broadcast at Summers-Taylor.

About ETSU
With a brace against the Terriers, Jared Leheta (Montreal, Canada) looks to become the next Buccaneer freshman to insert his name into the record books. The forward scored his second and third goal of the season in the win, one shy of matching Itode Fubara who sits in fourth place all time in Buccaneer freshman history with four goals. His two goals marked the first brace since the non-conference campaign of 2019, where Hauk Andreas Fossen tallied two in a win against High Point. Lucas Lightner (Clarksville, Tenn.) has also made his presence known as of late. After failing to find the back of the net in his rookie season, the sophomore has scored in back-to-back contests for the Blue and Gold. Both of Lightner’s tallies have been the game-winning strike, each coming with less than five minutes remaining in regulation.

Aidan O’Brien (Asheville, N.C.) proved on Saturday night why he is on set pieces, collecting both of his assists on the night off a free kick. The senior transfer grabbed his first multi-assist game of his career, tying Dominic Foster (London, England) to lead the team with two apiece. His two assists marks the first time a Buccaneer player recorded a multi-assist game since 2017, when Serge Gomis had two assists in a win over VMI.

Foster’s red card against Wofford means he will be out of contention for the game against the Bruins, but the Bucs grabbed a solid performance from Edafe Evivie (Charlotte, N.C.) in his first career start. An unfortunate own goal spoiled an otherwise solid performance at the back from Evivie and Co., the only other goal coming off a set piece. Josh Perryman (Sheffield, England) looks to get the nod in goal, yearning to build off his two shutouts in the last four games. The redshirt junior owns a 1.25 GAA, registering a .778 save percentage with his 28 parries.

About Belmont
Belmont enters with the most goals per game in the conference, tallying slightly over two goals a game. Efficiently, Belmont’s 13 goals come despite the Bruins ranking only fifth in shots per game at 9.17. The Bruins’ greatest strength so far in the season has been through their defense, only allowing two goals all year for a 0.33 GAA, far better than anyone in the SoCon. Belmont averages nearly 280 minutes of action without allowing a goal.

AJ Chastonay and Liam O’Brien enter ranking in the top five in the conference in points for the Bruins. Chastonay’s team-high four goals are shared for a SoCon best, the freshman midfielder tying Furman’s Jake Raine with nine points to lead the conference. O’Brien also has been familiar with the back of the net with five goal contributions on the year. His three goals and two assists rank him in a tie for third with eight points on the season. Drew Romig and Cameron Petty have taken split duties in protecting the Bruin goal, each playing in three contests. The two keepers have combined for a .31 GAA, 14 saves, a .875 save percentage and four clean sheets on the year.

Series History
ETSU holds a slight edge in the series between the two sides, taking a 4-3 advantage heading into the Tuesday battle. Only the third game between the two teams inside Summers-Taylor, the Blue and Gold enter with a 2-0 record inside the friendly confines of their home turf. Last season, the Buccaneers won on the road in double overtime with a Foster game-winner in the then freshman’s only appearance of the season. Meeting for a second time in the postseason, the Bucs were knocked out in the quarterfinals by the Bruins in a 2-0 defeat.