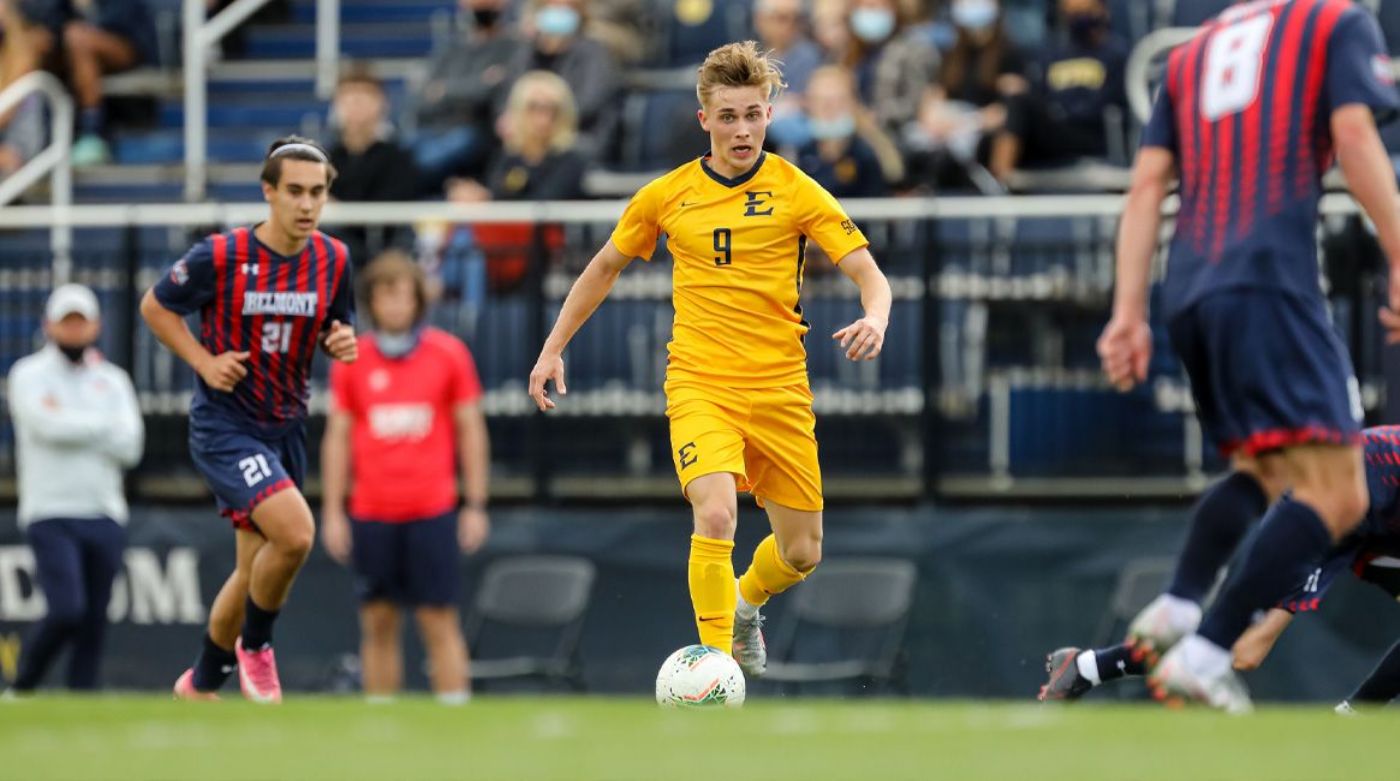 JOHNSON CITY, Tenn. (March 23, 2021) – The ETSU men’s soccer team shared a result with in-state foes Belmont in a 0-0 draw on Tuesday afternoon in Summers-Taylor, building a three-game unbeaten streak in the SoCon with only two games remaining in the regular season.

Only the second game of the year for the Bucs to end without a winner, both sides proved evenly matched through the majority of the game. Each team’s offense struggled to break down the opposition defense, Belmont entering with the best scoring defense in the conference. The 0-0 draw marks the third shutout of the season for the Bucs, all coming in their last five games.

ETSU continues its positive trend, claiming their longest unbeaten run of the season at three games.

The Bucs were outshot 13-9 on the afternoon, the Bruins holding a 6-1 advantage in shots on goal. The draw marks the first time in the David Casper era that the Bucs shared the spoils after attempting less than 10 shots. The Bucs were previously 2-14 when unable to reach the 10 shot clip.

With a majority of their set pieces coming in the first half, the Bruins tallied a 7-4 advantage in corner kicks, five of them coming in the opening 45 minutes.

In the Casper era, the eight games played is the fastest the Bucs reached three clean sheets. It took 12 games in 2018 and 13 in 2019 to achieve that feat.

The three-game unbeaten streak within the conference is the second time in the last three years ETSU has gone at least three games without a loss in SoCon play.

The tie between the two moved both sides to the top of the SoCon table with games set for action later in the evening.

After only a couple shots from each team harmlessly travelling past the posts from each side, the first attack of danger came in the 25th minute. Niccolo Dagnoni stepped up to take a free kick after a Buccaneer foul, standing over the ball to line up his shot. The effort sent Josh Perryman (Sheffield, England) into a sprawling dive to his left, parrying the attempt out for a corner kick. A minute later, Perryman again was called into action to his right side, matching the Belmont attempt to keep the Bruins out of goal.

Tarik Pannholzer (Flensburg, Germany) found himself on the end of a good Buccaneer attack in the 38th minute, a ball over the top finding him on his weaker left foot. The freshman winger attacked it on the volley, but the shot was always sailing over the bar. Only moments later the Bucs found their best chance of the afternoon. A good exchange of play from ETSU saw the ball get sent into the box where Luto Tom (Cape Town, South Africa) connected with a powerful shot just six yards out from the goal. The Bruin goalkeeper Drew Romig did well to make himself big, not seeing much of it as it caromed off the keeper and out of danger. Both sides would settle for a scoreless draw entering the break.

Grabbing the first two shots of the second half, the Buccaneers started the second period on the front foot. The visitors grew back into the contest by once again testing the Buccaneer goal. Perryman, who was announced as the SoCon Defensive Player of the Week during the halftime break, again came up big. The Englishman went full stretch just after the hour mark to once again deny Dagnoni from an opener. One more save from the ETSU shot stopper proved the only real quality chance for a regulation-time winner as the two sides went the full 90 minutes with honors even.

The best chance of the overtime period came with just over a minute remaining in the first period of extra time. Another foul in a dangerous area for the Bruins saw Dagnoni line up to take the free kick. The same result ensued as previous efforts, Perryman once again countering the Bruin forward by outstretching and denying the attempt. A tame effort for Perryman’s sixth save of the afternoon with six minutes remaining in the contest proved the final chance of note for either side, both teams having to settle for a point in a grueling 110 minutes of action.

The Bucs finish their home schedule next Tuesday, taking on the VMI Keydets in their second straight kick at 3 p.m.