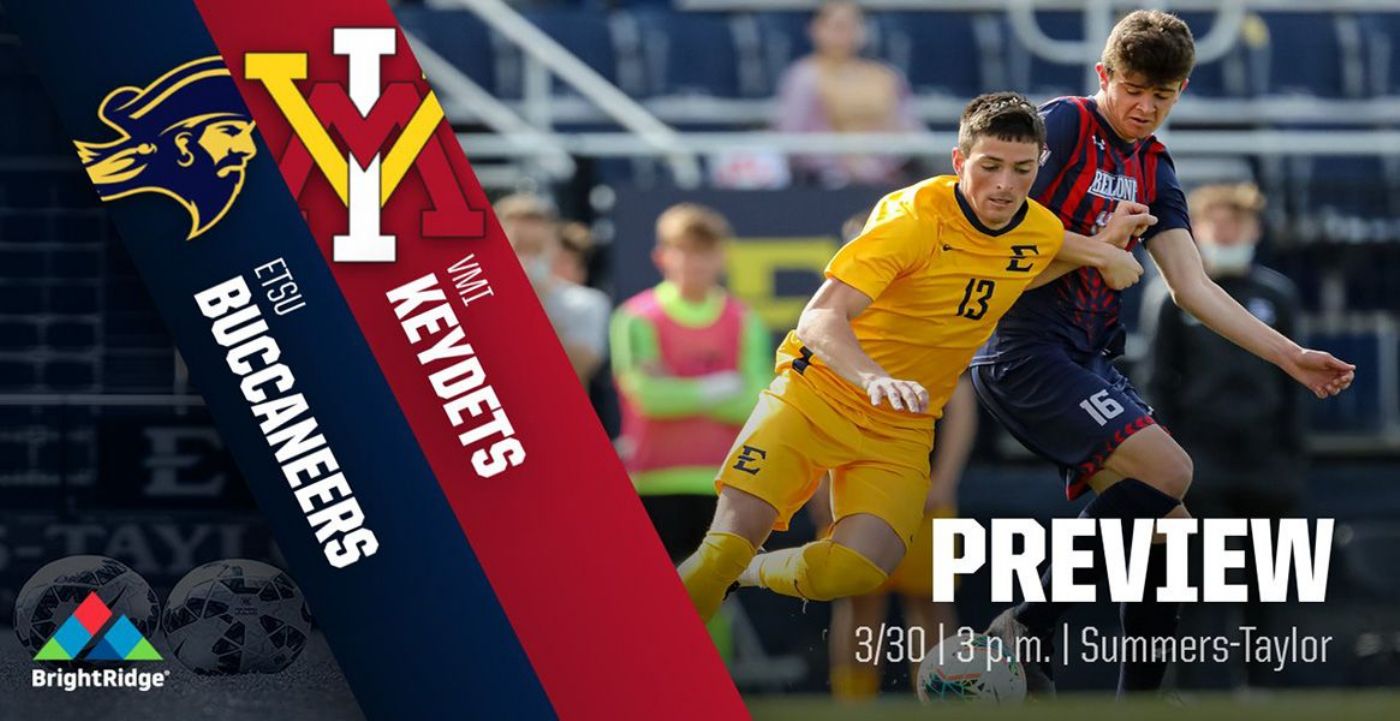 ETSU can clinch postseason bid with victory over VMI

JOHNSON CITY, Tenn. (March 29, 2021) –  The ETSU men’s soccer team has a chance to claim a spot in the Southern Conference Tournament on Tuesday afternoon, facing the VMI Keydets at Summers-Taylor Stadium in an important SoCon matchup that could guarantee a playoff spot for the Blue and Gold.

ETSU enters on a three-game unbeaten run, grabbing a pair of wins against Mercer and Wofford on the road before Belmont was able to hold the Bucs to a 0-0 draw inside Summers-Taylor a week ago.

A win would push the Bucs to 10 points in the league, all but ensuring a spot in postseason play due to tiebreakers held over other schools in the mix.

ETSU and Belmont met in a midday, midweek matchup in Johnson City last Tuesday. Facing their fourth game in 12 days, the Bucs used a new-look backline in part of a lineup that saw three fresh faces put into the starting XI. The defense held firm as the offense met the stingiest defense in the SoCon in form of Belmont, each side sharing a point as the two played to a 0-0 draw in a double overtime affair.

The Bucs (2-4-2, 2-1-1 SoCon) are set for action on ESPN+ for Tuesday’s midday matchup against the Keydets (2-7, 0-4 SoCon). Mike Gallagher takes the call on the broadcast at Summers-Taylor.

The Bucs enter the match against VMI with a 1.14 goals per game average in SoCon play, tallying their only multi-goal game in the 3-2 win against the Terriers. After a tough non-conference schedule, the Bucs have tightened up the defense, allowing less than a goal a game against conference foes. Two of the four SoCon matchups have ended with a Buccaneer clean sheet, allowing two goals to each the Paladins and Terriers. After a 13-9 advantage in shots for the Bruins last Tuesday, the Bucs now move to 2-14-1 under head coach David Casper when unable to reach 10+ shot attempts.

Freshman Jared Leheta (Montreal, Canada) looks to lead the line for the Buccaneers, having received a recent run in the starting XI. The forward scored his second and third goal of the season in the win against Wofford, one shy of matching Itode Fubara who sits in fourth place all time in Buccaneer freshman history with four goals. His two goals marked the first brace since the non-conference campaign of 2019, where Hauk Andreas Fossen tallied two in a win against High Point. Lucas Lightner (Clarksville, Tenn.) follows just behind Leheta, his two goals proving of huge magnitude in the ETSU season, both coming as game-winners in back-to-back victories over Mercer and Wofford.

Aidan O’Brien (Asheville, N.C.) proved against Wofford why he is on set pieces, collecting both of his assists on the night off a free kick. The senior transfer grabbed his first multi-assist game of his career, tying Dominic Foster (London, England) to lead the team with two apiece. His two assists mark the first time a Buccaneer player recorded a multi-assist game since 2017, when Serge Gomis had two assists in a win over VMI.

Seven games in, Josh Perryman (Sheffield, England) continues his strong career in the Blue and Gold. With three shutouts on the season, the redshirt junior is only the third goalkeeper in Buccaneer history to record double-figures in clean sheets. If the season finished now, Perryman’s .810 save percentage would be good for second all-time in program history, only trailing Jonny Sutherland’s season in 2017 where the shot-stopper recorded an .821 save percentage.

VMI enters the matchup against the Bucs at 2-7 on the year, an 0-4 record in conference play. The two wins this year came against Southern Virginia and Marymount, both by a 2-1 score. The Keydets are currently 110 games without a Division I win, outscored by a 30-3 margin in their seven losses this season. In SoCon play, VMI comes off the back of a 4-0 loss to the Spartans and a 6-0 loss to Furman on Saturday.

The Keydet team is averaging just .78 goals per game, conceding more than 3.5 per contest. Nathan Lam leads VMI with three goals on the season, four other Keydets registering one goal on the year. Sophomore Peter Sepulveda leads the Keydets with two assists. In goal, Broden Schull once again leads VMI in between the sticks, starting all nine matches for his side. Leading the way in saves and saves per game in the conference, Schull registered a season-high 10 saves in the loss to UNCG a week ago, his 59 saves pacing the SoCon.

In the matchup between the Bucs and Keydets, the Blue and Gold have an unblemished record against the Virginia side. In 12 matchups, the Bucs are 12-0 against the Keydets. The sides have met six times each at home, ETSU 6-0 in each. The Buccaneers have outscored VMI 40-4 in the series.