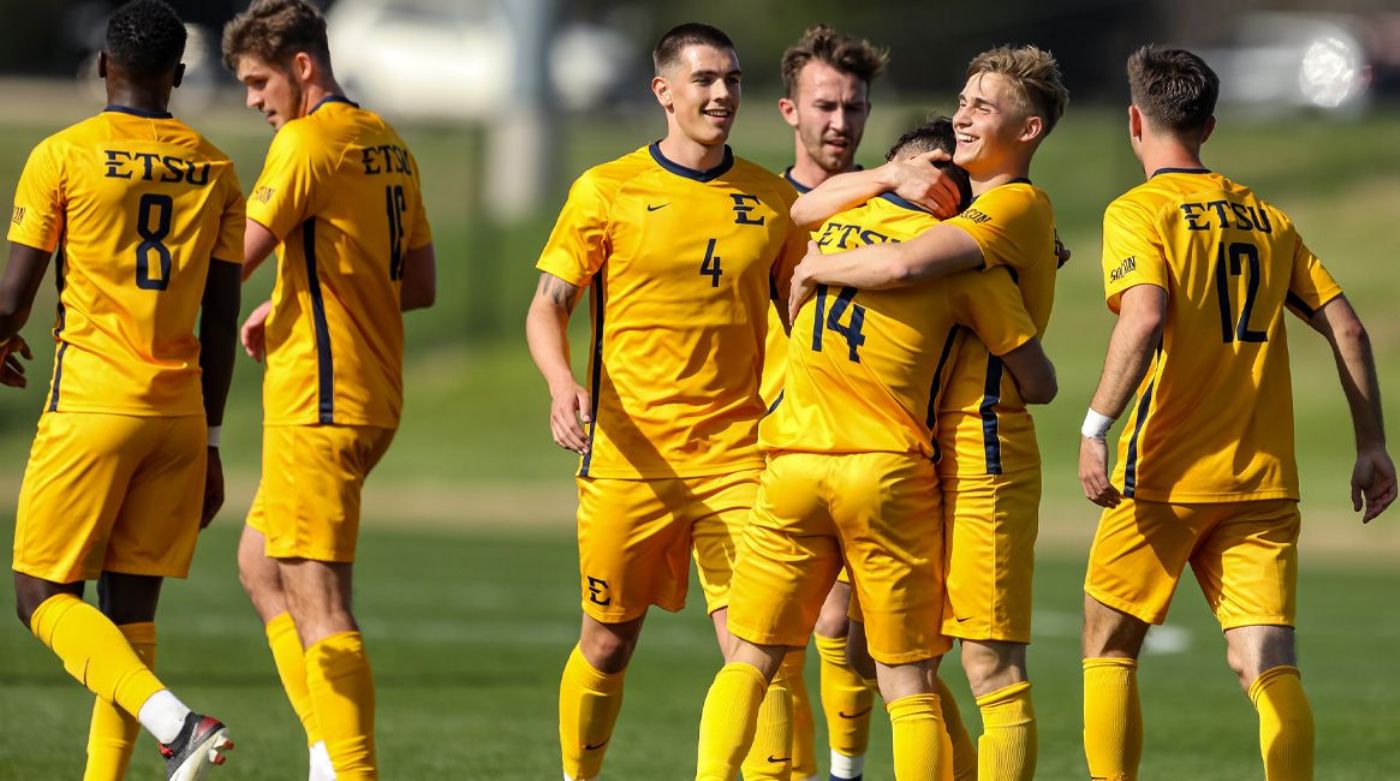 JOHNSON CITY, Tenn. (March 30, 2021) – If the ETSU men’s soccer team doesn’t play at Summers-Taylor Stadium the rest of the season, they’ll have sent the fans home with fireworks as the Bucs cruised past VMI to a program record 7-0 victory over the Keydets Tuesday afternoon.

Clinching a spot in the Southern Conference Tournament, the Bucs can guarantee a home field advantage in the first round of the tournament if they take care of business against the UNCG Spartans on Saturday night, with a few different pathways to playing in Johnson City available heading into the evening.

Before focusing on the Spartans, the Bucs had to focus on the Keydets, who hadn’t won a game against a Division I opponent in their last 110 attempts heading into Tuesday. The Blue and Gold did just that, scoring twice in the opening 10 minutes on their way to the best attacking display in program history, setting program records with goals (7) and shots (37).

Scoring five goals in four different matches in program history, ETSU had only reached that mark once inside the confines of Summers-Taylor Stadium. The Bucs set a new record against VMI, putting seven goals past the Keydets.

ETSU outshot the Keydets 37-3, setting a new program record in shots and in shots on target (25). The 25 shots on goal more than doubled the amount the Blue and Gold entered the contest with, having 18 shots on goal heading into today.

Tarik Pannholzer marks just the second member of the ETSU program to record a hat trick, having only been achieved once prior by Fletcher Ekern, who tallied three goals in a 4-3 win over UNCG on Oct. 18, 2016. Pannholzer’s seven points and seven shots on target tie an NCAA-best on the season, only one of 14 players to score a hat trick this year.

The Bucs recorded more than 20 shots for the first time since their match against VMI in the 2019 season, registering 21. The last time ETSU attempted 30 shots was also against the Keydets in a Oct. 9, 2018 matchup in Summers-Taylor.

Jared Leheta’s brace moved him to a sole possession of third in Buccaneer history, scoring his fifth goal for the Blue and Gold. Only two other freshman seasons have seen more goals scored, both coming in the 2019 campaign through Hauk Andreas Fossen (8) and Kieran Richards (6). Leheta passed Itode Fubara’s four goal campaign in 2010.

ETSU had troubles getting going in the early stages of games, only grabbing two goals in the first half entering today’s contest. The Bucs doubled that tally inside the opening 10 minutes, scoring three in the first half. ETSU finished more than doubling their season total in goals scored, having scored six goals on the season prior to the 7-0 win.

Lucas Lightner recorded his first brace of his career, entering with two goals on the season and in his career. The sophomore now has four goals in his last four games.

Josh Perryman records his fourth clean sheet of the season, moving him to 11 in his collegiate career. The redshirt junior remains third in the program in clean sheets.

VMI’s Brendon Schull recorded an NCAA-best in saves with 17, only the fourth time a goalkeeper has recorded 17 saves in the last nine seasons.

The Blue and Gold attack came out from the opening minute, forcing the VMI goalkeeper into two quick saves in the first four minutes. The third shot of the afternoon couldn’t be saved as Kieran Richards (Hamilton, New Zealand) found Jordan Broadwater (Kingsport, Tenn.) for a one-time cross. The senior’s pass found Jared Leheta (Montreal, Canada) in acres of space, who nodded home in the sixth minute to give the Bucs an early lead with their quickest strike of the season.

The Keydets were facing pressure just 20 seconds later as Tarik Pannholzer (Flensburg, Germany) again made Brenden Schull equal his effort. The freshman grabbed a second opportunity moments later, tucking away a tidy finish off the underside of the crossbar after Cameron Carroll (Clarksville, Tenn.) did well to get to the touchline before picking out Pannholzer with his pass.

Pannholzer turned provider just moments later, working down the left side before cutting the ball back to his preferred right foot near the touch line. His pass found the feet of Lucas Lightner (Clarksville, Tenn.) who shifted to his preferred right boot and tucked away the Buccaneer’s second goal of the afternoon with just 10 minutes expired on the clock.

Schull stayed busy, grabbing seven more saves in a span of 13 minutes as the Buccaneer attack looked hungry for goal. The threat would pay off once more, Pannholzer turning provider as he worked down the left side before cutting the ball back to his preferred right foot near the touch line. His pass found the feet of Lucas Lightner (Clarksville, Tenn.) who shifted to his preferred right boot and tucked away the Buccaneer’s third goal of the afternoon with just seven minutes remaining on the clock in the opening 45 minutes.

Richards grabbed the last opportunity of the first half, poking a first time effort in a crowded VMI box off the crossbar before the Keydets cleared and settled for a 3-0 deficit into the break.

The Keydets registered the first shot of the second half, proving to be their only one on target of the afternoon as Josh Perryman (Sheffield, England) comfortable held the attempt in his grasps. With the first attempt of the half for the Bucs just a minute later, Leheta grabbed his second of the day, scoring his second brace in three games as the freshman intercepted a loose ball in the Keydet defense before rounding the VMI keeper and tapping in from close range.

A corner kick in the 69th minute provided opportunity for ETSU’s fifth goal, Dominic Foster (London, England) looking to score from his center back position. His two strikes were blocked and then parried by Schull before Lightner tapped home the rebound for his second of the day, tying a then-school record for most goals scored in a match.

Picking up the ball after a turnover in the VMI midfield, Pannholzer became the third Buccaneer to grab a brace, shifting to his right foot and curling a beautiful effort into the top right corner of the VMI goal. Pannholzer worked his magic with just moments remaining in regulation, setting up to take a free kick just outside of the box. The freshman curled his effort into the top left corner this time, planting Schull as the keeper had no chance and the German wheeled off to celebrate his first hat trick, and only the second one recorded in program history as ETSU walked off Summers-Taylor for possibly the last time of the season in a 7-0 rout over the Keydets.

The Bucs finish their regular season schedule on the road at UNCG, taking on the Spartans in a 7 p.m. matchup on Saturday, April 3.