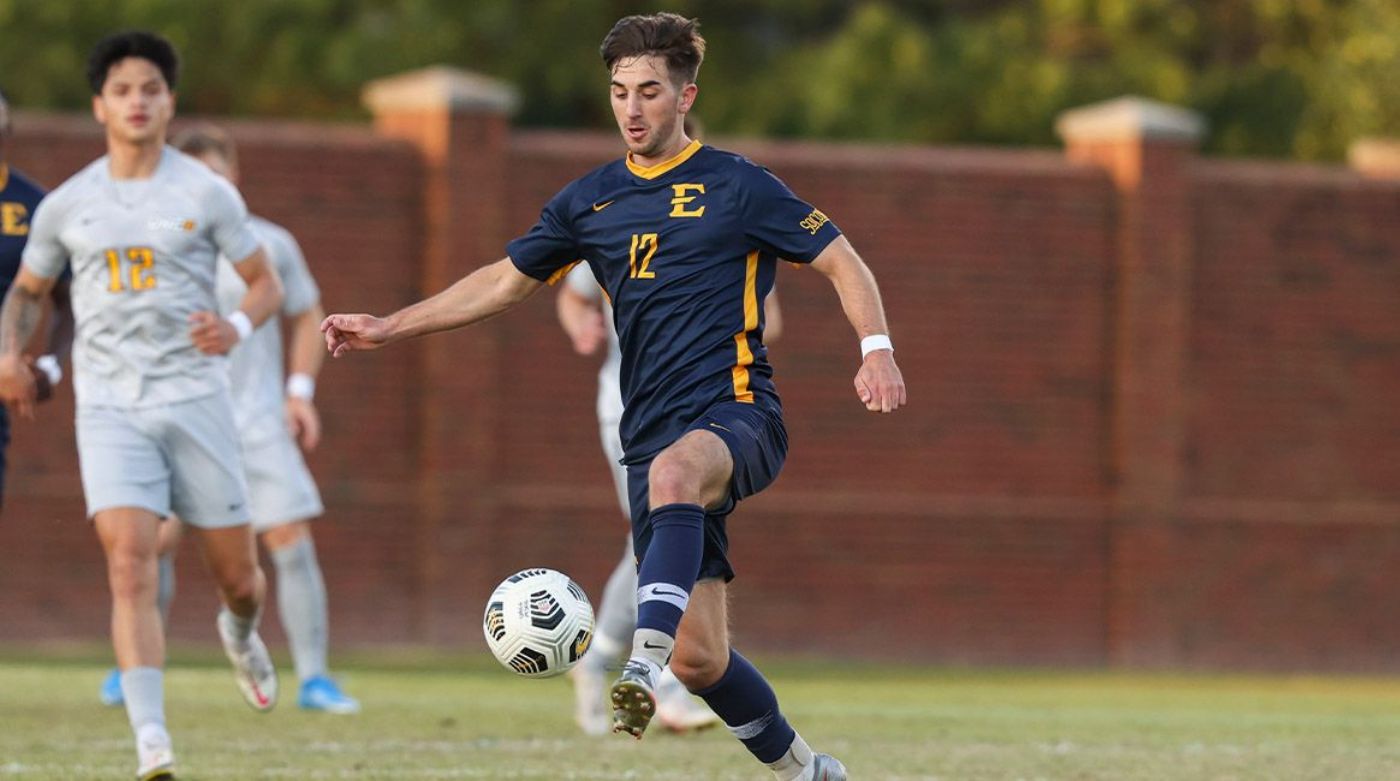 Bucs end season tied for second in the league, are set for #3 seed in conference tournament

GREENSBORO, N.C. (April 3, 2021) – As postseason loomed over the ETSU men’s soccer team’s heads, the Bucs and Spartans met in the first of back-to-back meetings on Saturday evening.

The scoreless draw at UNCG Soccer Stadium ensured a rematch a week from now in the same location as UNCG claimed the two seed with the result. After Belmont beat Mercer earlier in the evening, the tiebreaker between the Bucs and Spartans came down to the best result over the Bruins after both teams finished the season tied for second place with 11 points. UNCG’s dramatic overtime victory over the Bruins proved the difference as ETSU drew with the Nashville side in a double-overtime feature at Summers-Taylor Stadium back on March 23.

With the semifinal meeting all but ensured barring a complete reversal in goal differential between ETSU and Belmont, the Bucs still looked to grab the win to bring the rematch back to Summers-Taylor Stadium. Jumping out on the front foot, the visitors looked more likely throughout the majority of the game to grab a goal, the defense bolstering up when called upon.

In the end, nothing could be decided from the two teams with a rematch looming next weekend, ETSU getting a short rest before a return trip to Greensboro is on the cards.

In the 17th contest between the two teams, the Bucs are now 2-1-6 in games that have entered overtime with UNCG. ETSU holds a slim advantage with a 6-5-6 overall record against the Spartans.

Over the last two games, the Bucs have held their opponents to just two shots in the first half. After not allowing a single shot against the Keydets, it took until the 30th minutes for the Spartan attack to collect a shot.

ETSU outshot UNCG 15-8 on the evening, testing the Spartan keeper three times on the night. The Bucs move to 18-5-4 under Head Coach David Casper when tallying more than 10 shots.

The Blue and Gold collected their fifth clean sheet of the season and their fourth in their last five games. The five shutouts are tied most in a season under Coach Casper.

The Spartans held a 5-3 advantage in corner kicks, all three of the Buccaneers’ chances coming in the second overtime. In a spirited affair, 31 fouls were called on the night with ETSU whistled for 18 of them. Six yellow cards were handed out, four going to the Blue and Gold.

The Bucs enter postseason play on a five game unbeaten streak, holding a 3-0-2 record in their final five matches. It is the longest unbeaten run over the three seasons under Coach Casper.

After only six minutes were needed for the Bucs to register their first goal of the game in their last match, the Blue and Gold found it harder to pave the same fruition against the Spartans. Over the first 30 minutes, the Bucs recorded the only two shots of the contest with their one on target being a tame effort collected by UNCG’s Niclas Wild. The Spartans finally grabbed their first chance of the game as Josh Perryman (Sheffield, England) collected comfortably from a long range effort. Perryman would be called into action one more time in the half, cleanly moving to his left with a diving stop to deny the Spartans. Luto Tom (Cape Town, South Africa) had the final opportunity of the first 45 minutes, his shot sailing just over the bar with just minutes remaining. The two sides headed into the locker room at the intermission scoreless.

Needing just seven minutes to match their first half tally in shots, the Spartans looked the more dangerous side coming out of the break. The hosts tallied another effort in the 55th minute, all three of them harmlessly travelling past Perryman’s goal.

The Bucs grabbed their first chance of the second half in the 57th minute. Tarik Pannholzer (Flensburg, Germany) found some open space 25 yards out in the center of goal and fired a right footed curling effort, Wild matching the attempt by collecting it comfortably. A flurry of Buccaneer attacks eight minutes later saw Pannholzer squeeze a threaded pass into the box where Gabriel Ramos (Brazil) was denied twice from Spartan defenders before Cameron Carroll (Clarksville, Tenn.) drove his shot left of the post.

ETSU thought it got the initial goal in the 67th minute as Henrik Günther (Germany) played in a cross to the box. Jared Leheta (Montreal, Canada) tucked it into the far corner before the ref turned it away after deeming the freshman used his hand to help score the goal. Neither side found a threatening attack the rest of the way as the Bucs were forced into their fourth overtime of the season.

The Blue and Gold had the best chance of the opening 10 minutes. Pannholzer did well to settle a high arcing ball, pushing it onto his left foot. The freshman blazed his shot just high and wide of the goal, forcing Wild to scramble before watching it go wide. Despite outshooting the Spartans 4-0 in the 20 minutes of extra time, the Bucs were unable to find a winner as they settled for their third draw of the season, all being 0-0.

The Bucs embark onto the SoCon Tournament, entering the competition with a rematch against the Spartans. Keep updated on a game time and date by visiting ETSUBucs.com, or by following the Bucs on Twitter at @ETSUMSoccer.