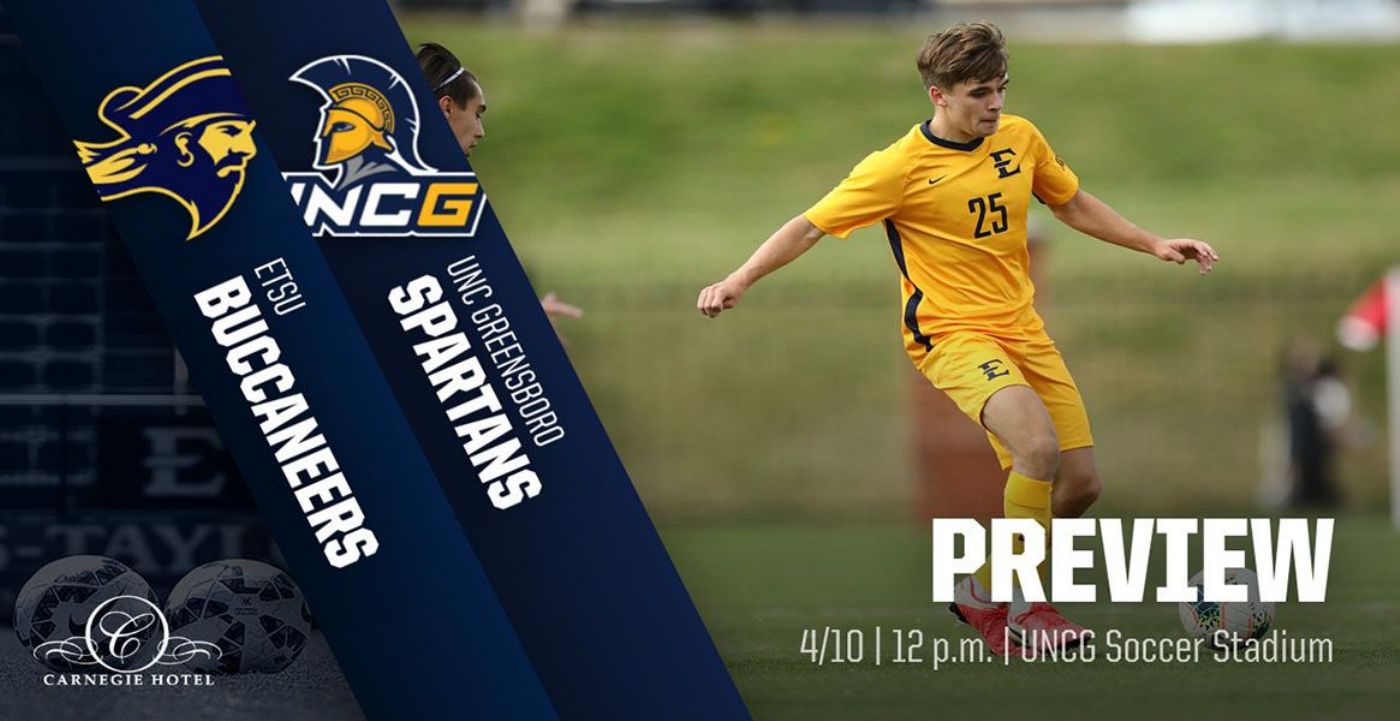 ETSU and UNCG meet for the second time in seven days, winner set for a SoCon Championship appearance

After finishing the regular season on a five-game unbeaten run, the Bucs now face a win or go home style format the rest of the way as they meet the UNCG Spartans in the first round of the Southern Conference Tournament on Saturday evening.

The match in Greensboro marks the second time in a week the Blue and Gold travel east to take on the Spartans. In the same location on the same day, the two sides meet in a 12 p.m. showdown instead of last week’s 7 p.m. contest.

The two sides played to a nil-nil draw after 110 minutes last week, the Buccaneers getting the advantage in opportunities with a 15-8 edge in shots. However, the Blue and Gold couldn’t provide the finish, each team settling for a tie on both the evening and in the Southern Conference standings. With both teams finishing with 11 points in conference play, the two teams finish tied for second place in the league. With the Spartans grabbing the tiebreaker with the better result against #4 Belmont, UNCG edged the Bucs to grab the #2 ranking and home field advantage with a trip to the SoCon Championship on the line.

The two teams have met three times prior in the SoCon Tournament. The Bucs have taken the last two, winning in penalties in 2015 before a 5-2 score line for the Blue and Gold the following year. UNCG’s win against ETSU came in 2014, knocking off the Bucs 2-1 in double overtime.

Game coverage will also be provided on ESPN+. Drew Casey will be on call for the bout between the two teams.

After an early offensive struggle to the season against quality opposition, the Bucs started to find their rhythm in conference play. ETSU ranked third in the conference with 15.67 shots per game, recorded second-most goals (12) and assisted a tied-high 11 times. The Bucs also got it done defensively, holding the second best defense in the league with a .67 GAA in league play, tying a joint-high four shutouts in conference with both Belmont and Furman.

Freshman Jared Leheta (Montreal, Canada) enters postseason play as the Buccaneer leading scorer, tallying five goals in his rookie campaign. Leheta has posted the third most successful rookie season in terms of scoring, one goal back of Kieran Richards (Hamilton, New Zealand), who registered six last year as a freshman. Lucas Lightner (Clarksville, Tenn.) proves to be a valuable asset off the bench, scoring all four of his goals as a substitute to pace the team with the second-most goals on the year. Showing flashes all season, Tarik Pannholzer (Flensburg, Germany) finally grabbed the finished product in sensational fashion. The rookie added three goals and an assist in the win against VMI, joining Fletcher Ekern as the only other Buccaneer to record a hat trick in program history. Pannholzer is one of just 16 players to record a hat trick this season, tying five others for an NCAA-best seven points in one game after also registering an assist in the win.

From his center back role, Dominic Foster (London, England) leads the squad with three assists, adding another in the win over VMI. Three others add two assists to the team: Pannholzer, Richards and Aidan O’Brien (Asheville, N.C.).

10 games in, Josh Perryman (Sheffield, England) is on pace for one of the best seasons historically in Buccaneer goalkeeper history. The redshirt junior has already posted a career-high five shutouts on the season, becoming only the third Buccaneer to have double-digit clean sheets in their career. Perryman’s current .822 save percentage would put him at the top of the single-season charts in ETSU history, Jonny Sutherland currently holding the top mark with a .821 save percentage in the 2017 season.

After an opening loss to UNCW, the Spartans produced an otherwise unblemished non-conference schedule by rattling off four straight wins heading into SoCon play. UNCG hit a small patch of bad form, taking a draw off of Mercer before a defeat to Furman saw the Spartans winless in the league after two games. The Spartans finished the SoCon campaign with a four game unbeaten run, just one shy of what the Bucs enter postseason play with.

The Spartans enter with a 2.00 goals per game average on the offensive side of the ball, while allowing just under a goal a game on average (.91) over their first 11 games. UNCG nearly doubles its opponents’ shot attempts with a 168-94 advantage, 45.8% of their shots being on target. The hosts average just under seven corner kicks per game.

UNCG enters with three different players with 5+ goals on the year. Led by Theo Collomb with his six goals and three assists to lead the conference in points, both Mani Austmann and Fernando Garcia have tallied five goals to their names on the season. Sam Coad leads the Spartans with four assists, while Niclas Wild has received the majority of time between the sticks for UNCG. The German freshman owns a 5-1-2 record in the net, recording a .774 save percentage and a 0.82 GAA.

The Blue and Gold enter the series with a 6-5-6 advantage overall against the Spartans. The visiting team has usually had the advantage in the series, ETSU having gone six games unbeaten against UNCG on their home turf. Overall, the Bucs are 4-2-3 in Greensboro.