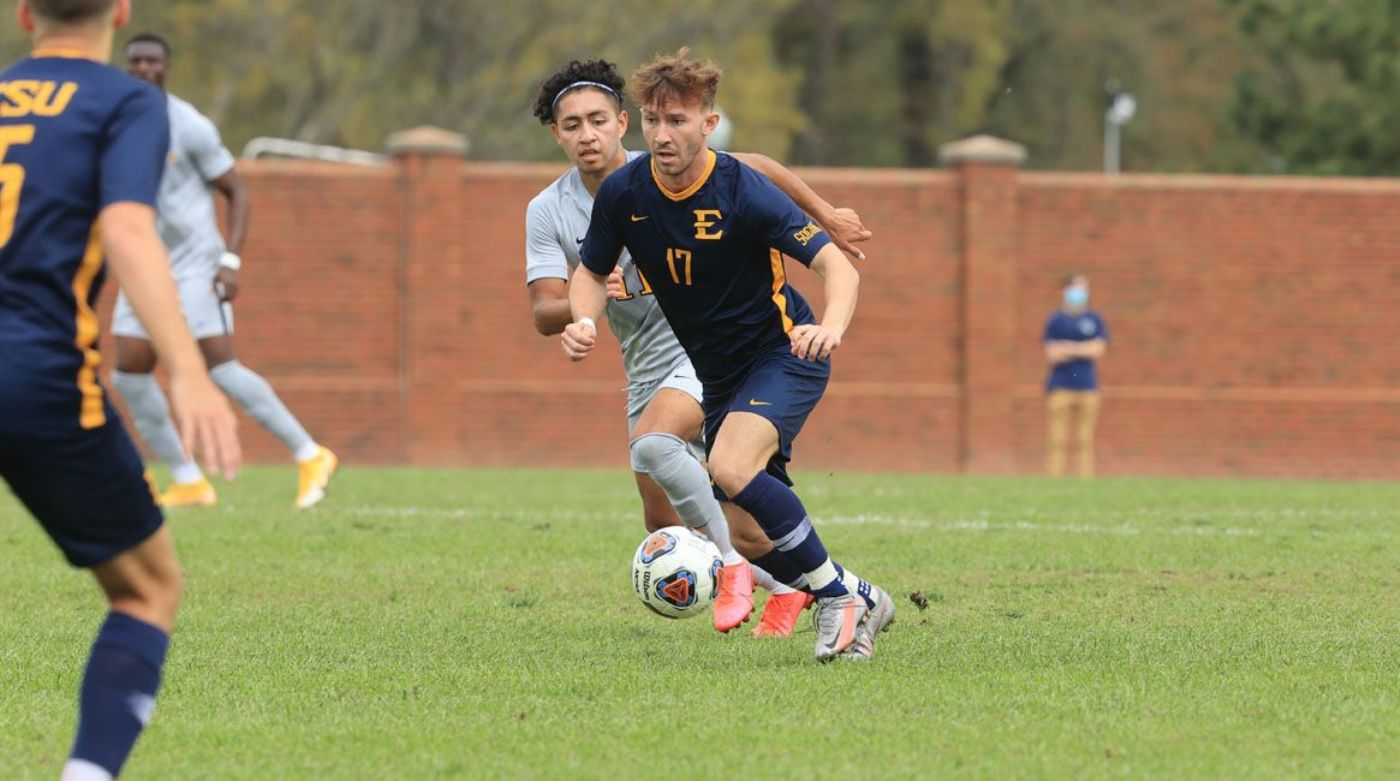 GREENSBORO, N.C. (April 10, 2021) – A late comeback bid saw the ETSU men’s soccer team fall just short on Saturday afternoon, scoring in the 70th minute but unable to grab an equalizer in a 2-1 defeat to UNCG in the semifinals of the Southern Conference Tournament.

With an initial 6 p.m. kickoff set for the match at the UNCG Soccer Stadium, potential inclement weather on Saturday noon saw officials move the game to a high noon kickoff.

Both teams finished in a tie for second place in the conference standings, the Spartans earning a home game due to a tiebreaker where UNCG gained a better result against the teams that made it to the postseason. The two teams matched up in a fierce 0-0 draw just seven days ago, grinding out a physical 110 minute affair in the same stadium on the final day of the regular season.

With neither team finding the back of the net in the first meeting between the two, it took 37 minutes for the hosts to see the net ripple in the first half. UNCG doubled its tally in the 61st minute to give the Spartans what seemingly might be a comfortable lead.

The Blue and Gold fought back, countering just 10 minutes later to find their first goal of the contest with just under 20 minutes to play. The Bucs enjoyed a spell of possession in search of the equalizer before the Spartans were content with their lead and went to a more defensive approach, where they were able to frustrate the Buccaneer attack on their way to claiming a spot to the Southern Conference Championship in just a week’s time. The Spartans will face #4 Belmont in Greensboro after the Bruins upset the #25 nationally ranked Furman Paladins in 3-1 fashion on Friday evening.

In the 18th contest between the two teams, the Bucs are now all squared with the Spartans with a 6-6-6 record overall. ETSU and UNCG are also inseparable when meeting in the SoCon Tournament, the Spartans tying the series at 2-2 in postseason play after breaking the Bucs two-game win streak over UNCG in the tournament. ETSU falls to 4-3-3 when playing in Greensboro.

Only seven shots between the two teams were attempted in the first half. The physical battle saw 17 whistles in the first 45 minutes, ETSU being called for 10 of them. The Bucs finished with a slight advantage in shots over the Spartans, 9-6. UNCG converted four of its six shots on target, compared to ETSU’s five attempts on frame. The Blue and Gold are now just 2-15-1 under Coach Casper when failing to register 10 shots or more.

The Bucs finish their season ending their five game unbeaten streak, holding a 3-0-2 record in their final five regular season matches. It was the longest unbeaten run over the three seasons under Coach Casper.

Jared Leheta moved to joint-second all-time in scoring in Buccaneer freshman history, tying Kieran Richards with his sixth goal of the season in the loss. Richards achieved the feat just one season ago in the 2019 campaign.

The hosts looked to get an early start on the afternoon, trying to take advantage of an early free kick in the Buccaneer defensive third. Josh Perryman (Sheffield, England) was called into action, comfortably collecting the ensuing header before transitioning to the attack. The pressure remained in the Buccaneer half, Edafe Evivie (Charlotte, N.C.) being forced into a tackle that earned the sophomore a yellow card just two minutes into the contest. The Bucs settled down, not allowing another shot until the 21st minute where Perryman once again remain composed and collected the effort cleanly.

Lucas Lightner (Clarksville, Tenn.) had the best chance for either side in the 26th minute, receiving a perfect cross to the back post. A miscalculated bounce saw the first time effort blaze over the bar to keep the Bucs out of the net. Kieran Richards (Hamilton, New Zealand) almost made an immediate imprint on the game after returning to the lineup, missing last week with an injury. The sophomore played a lovely give-and-go and curled the return pass just over the bar, beating the UNCG keeper had it been on target.

The Spartans grabbed the opening breakthrough in the 37th minute through Theo Collomb. The Freshman Player of the Year received a through ball from Mani Austmann, poking home past Perryman to give the hosts a first half lead. The Bucs responded with a couple of attempts on the Spartan goal, but were unable to find an equalizer as UNCG took a 1-0 lead into the break.

With as many yellow cards as shots in the opening 15 minutes of the second half, the Spartans had the best chance to double their lead in the 56th minute. A crafty move to the end line saw a UNCG attacker send the ball along the six yard box, where Fernando Garcia scuffed his shot and sent his wide open attempt well over the crossbar.

Just after the hour mark, the hosts grabbed a two goal advantage through Angel Bacho. The UNCG forward picked the ball up outside of the 18 yard box, curling a long range effort to the top left corner to leave no chance for Perryman, giving the Spartans a 2-0 lead with 30 minutes to go.

With the hosts seemingly taking control of the game, the Bucs responded with a quick counter attack. As Jack Perry (Kingsport, Tenn.) cleared up the field to Gabriel Ramos (Sao Paulo, Brazil), the freshman directed his first touch past the two Spartan center backs. Jared Leheta (Montreal, Canada) was sent through on goal, using his body well to shrug off a late challenge from the Spartan defender before tucking his effort past an oncoming Niclas Wild to cut the Buccaneer deficit in half with just 20 minutes remaining.

As the Bucs saw the momentum shift towards the Blue and Gold, the hosts responded by taking a much more defensive approach, shifting gears to try and kill the clock and take precious seconds off wherever they could. The strategy proved frustrating to the Bucs, who were only able to record one shot in the final 10 minutes as the Spartans saw the clock strike to zero with a 2-1 advantage, ensuring that the SoCon Championship would be settled in Greensboro next week while the loss sees the Bucs play their final match of the spring season.