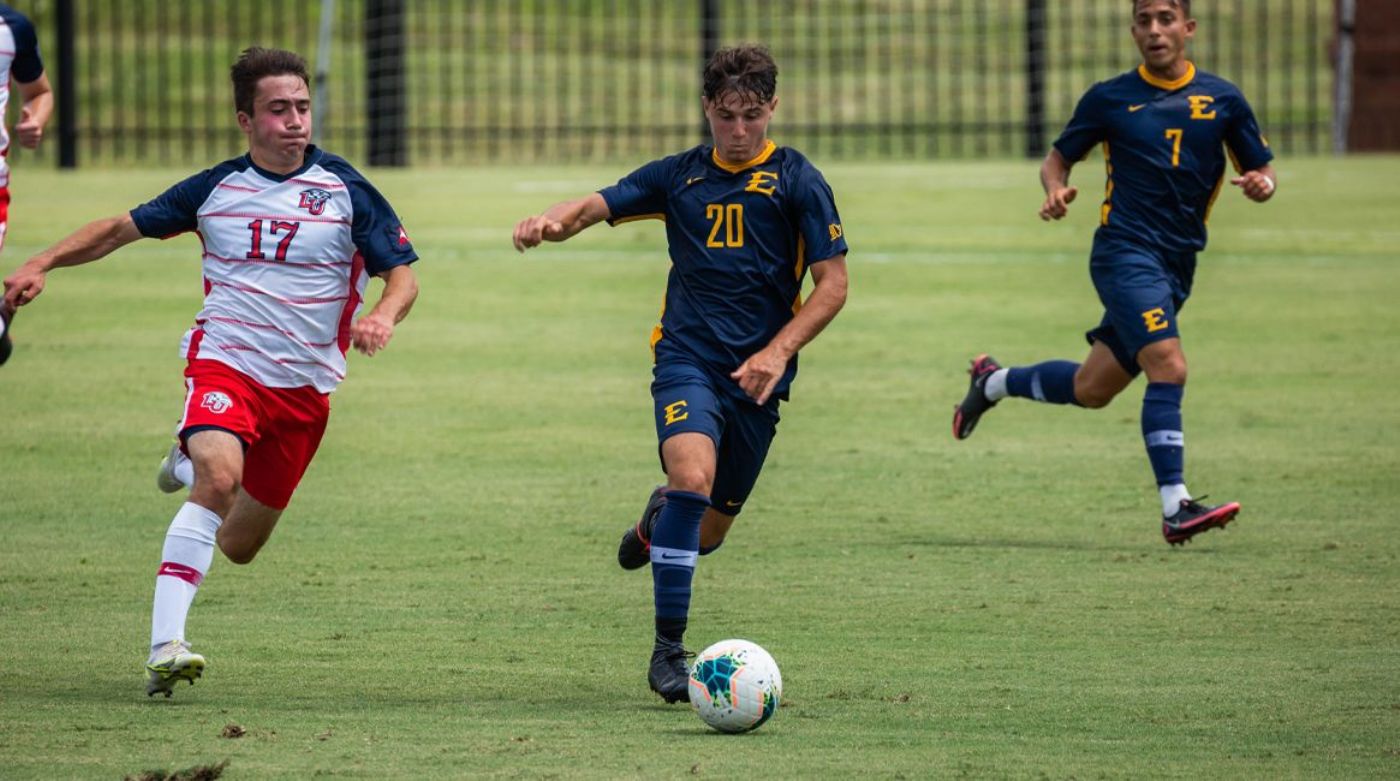 JOHNSON CITY, Tenn. (Aug. 26, 2021) – After what was a season many won’t forget, the ETSU men’s soccer team is back to playing in their first game in the fall since 2019, heading to Longwood to battle the Lancers on Friday evening for the first meeting between the sides.

ABOUT ETSU
ETSU opens the campaign after coming off a regular season in which the Bucs settled down in conference play, going 3-1-2 to hold a tie for second place with UNCG, who they eventually fell to in a 2-1 score in the semifinals of the SoCon Tournament.

Coach Casper enters his fourth season at the helm of the Buccaneer program. 17 players remain on the 23 man roster a year ago, while 11 additions have been added to provide depth and competition throughout the squad.

A talisman between the goal posts, Josh Perryman (Sheffield, England) looks to win competition as the starter in the net, entering the season with the second-best save percentage in program history (.748). His 19 wins and 12 shutouts rank third in program history.

The backline remains relatively untouched, 30 starts between returning defenders being spread throughout the Buccaneer defense. Dominic Foster (London, England) and Josh Hancock (Torbay, England) round out an experienced three operating within the central defense.

The two players who started in all 11 matches last year look to return to the midfield, Aidan O’Brien (Asheville, N.C.) and Jack Perry (Kingsport, Tenn.) provided depth in the defensive midfield. Kieran Richards (Hamilton, New Zealand) looks to get back to his freshman form where he scored six and assisted two goals.

Tarik Pannholzer (Flensburg, Germany) returns as one of the main focal points of the Buccaneer attack, scoring only the second hat trick in program history last season. Joining him is Lucas Lightner (Clarksville, Tenn.), the top returning goal scorer with four strikes finding the back of the net last season.

ABOUT LONGWOOD
The Lancers enter the campaign fresh off a 2-6-1 record in the spring season, going 1-5-1 within conference play. Longwood looks to shake off their woes at home in 2021, going 0-3 entering Friday night’s matchup.

The top three scorers on the spring team return this fall, combining for six goals and three assists between Markus Gronli, Josh Fordyce and Leif VanSlyke. Handling the majority of duty between the pipes, Jacob Reimers looks to reclaim his #1 spot in goal in his final season for the Lancers.

SERIES HISTORY
The matchup between the Lancers and Bucs will be the first in program history, the two having never met before the Friday kickoff in Virginia.

SEASON OPENERS
The Bucs will look to shake off a historically unfavorable omen in opening the season on the road. ETSU enters the match with a 0-7-1 record to open the season in an unfriendly venue, while holding a 3-9-1 record overall in the first away match of a campaign.