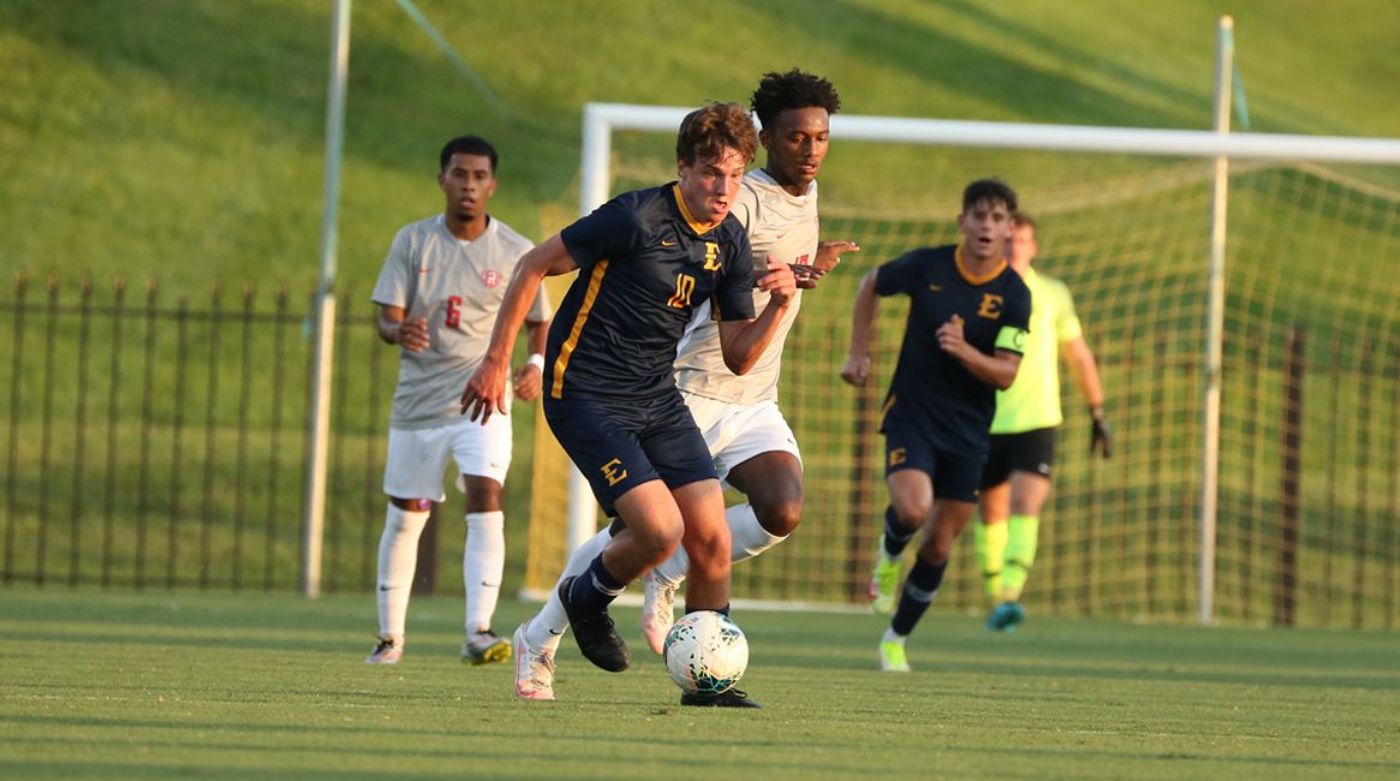 Entering the half time whistle with a 3-0 lead, the Buccaneers faced a nervy second half after conceding twice in three minutes with 20 minutes remaining. The ETSU defense settled in, receiving a fourth goal from the offense late in the game to seal the match and give the Blue and Gold a victory in their home opener.

Tarik Pannholzer (Flensburg, Germany) found the back of the net for the second time in as many games as the sophomore connected on a perfect cross from German compatriot Henrik Günther (Guetersloh, Germany) in the 12th minute to give ETSU the lead.

Just over 12 minutes later, Gabriel Ramos (Sao Paulo, Brazil) followed up on a rebound from a saved shot attempt and tapped into a wide-open net, the first goal scored from the ETSU sophomore.

Jack Perry (Kingsport, Tenn.) grabbed his first collegiate goal 35 minutes in, playing a pass to Pannholzer who laid it right back to the midfielder. Perry curled his effort around the keeper and into the far bottom corner to help the Blue and Gold race to a 3-0 lead.

After conceding two goals midway through the second half, Cameron Carroll (Clarksville, Tenn.) sealed the win as the junior received a ball on the left side of the pitch from Ramos, firing low and into the far bottom corner for the eventual 4-2 score line.

Josh Perryman (Sheffield, England) made his home debut on the season in the win, earning his 21st career victory. The Englishman had no chance for the two goals conceded, making three saves on the night.

Radford’s goal was tended by Joseba Incera, who grabs his first loss of the early season. The junior recorded three saves.

It took just the first ETSU shot on the evening to get on the board, grabbing the lead in the 12th minute. Pannholzer cleanly struck a precision cross from Günther into the bottom corner before turning to celebrate with his team.

Pannholzer forced the Radford shot stopper into the first save of the night just moments later as the Bucs landed the early blows against the Highlanders. The pressure paid off once more in the 23rd minute as Ramos got off the mark in his Blue and Gold career. Kieran Richards (Hamilton, New Zealand) took on a shot with just the keeper to beat as Incera stood to the task. The rebound trickled to the opposite side of the goal, where an oncoming Ramos tucked it neatly into the net as the Bucs doubled their advantage.

With just over 10 minutes left in the half, the Bucs made it three through sophomore Perry. Neglecting shouts from the crowd calling for a shot, the midfielder played it into Pannholzer, who in turn laid it back off to the feet of Perry. The Kingsport native indulged in the opportunity on the second time asking, curling his 20 yard effort around a host of players in the box before sneaking past the keeper and inside of the net as he wheeled off into a cartwheel backflip in celebratory fashion.

Coming out of the half with an 8-1 deficit in shots, the Highlanders started the second in more positive fashion. Their pressure finally found fruition through Dorion Dixon as the forward struck a half clearance into his feet cleanly. Perryman was unable to locate the ball through traffic, beating the keeper to his right to chip away at the Buccaneer lead.

Only moments later the Bucs were stunned by an incredible effort from the Highlanders. Yoshiya Okawa picked up the ball with his left foot from 25 yards out and hammered it into the top right corner, giving no chance for Perryman to save as within five minutes the Highlanders forced the game into a one-goal contest.

Despite looking for the equalizer, it was the Blue and Gold who found the back of the net to seal the victory for the home side. Ramos slipped a pass into the feet of Carroll who was racing down the left with no one near him. The defender-turned-forward put it on his favorite left foot and ripped his shot into the opposite bottom corner and rippled the net, ETSU all but earning the win in the 84th minute.

Tonight was the first time since 2016 that the Bucs opened their home campaign with a victory as they also beat George Mason in a 4-2 score.

The win marks the first time since 2014 that ETSU started a season 2-0 after wins against Longwood and Radford keep the Blue and Gold unblemished early on.

The four goals marks just the third time the Bucs reached that mark in the David Casper era, beating VMI 4-0 in 2018 while setting the program record with a 7-0 win against VMI last season.

ETSU held a 14-11 advantage in shots, forcing the Highlanders into four saves. The Bucs also held a 5-3 tally in corner kicks.

A big one awaits the Blue and Gold on Tuesday, as the Bucs host reigning champions Marshall inside Summers-Taylor. The 7 p.m. kick is FREE general admission and will be a Gold Out.