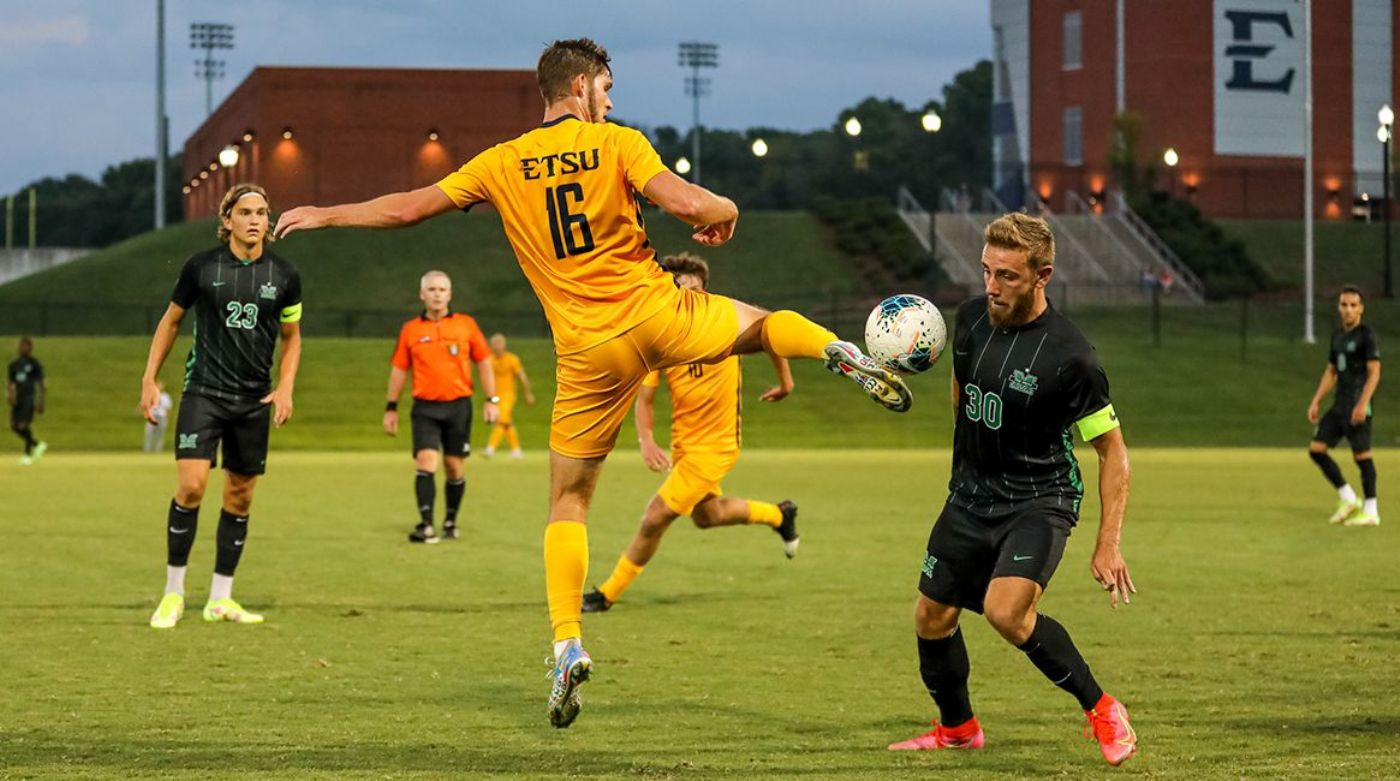 JOHNSON CITY, Tenn. (Sept. 7, 2021) – The ETSU men’s soccer team met the reigning national champions on Tuesday evening, the #10 ranked Marshall side grabbing a 4-1 win inside Summers-Taylor in front of a packed crowd.

The 1,296 fans made noise throughout the contest in anticipation of an upset brewing inside Johnson City but found their Buccaneers down 2-0 just 51 minutes in. After a Kieran Richards (Hamilton, New Zealand) strike found the back of the net, the crowd was reinvigorated in full support of the Blue and Gold. Two class finishes and a few missed Buccaneer opportunities proved to be enough for the visitors to survive a brief scare an hour into the match.

Richards opened his season account in the 54th minute. The junior played an excellent give-and-go with Carlos Portas (Barcelona, Spain) to get the ball back at his feet for a tidy and powerful finish past the keeper to bring the Bucs within a 2-1 score.

Oliver Semmle got the nod in goal, but it was Gabe Sitler who finished the game in the net for Marshall, the former getting sent off with a straight red in the 79th minute. Both keepers recorded a save.

The Bucs defense held strong over the course of the first half, pestering the Marshall attack that didn’t allow the Herd any significant chances until the 28th minute. Vinicius Fernandes scored his fourth goal of the season, curling home an effort at the top of the box into the bottom corner.

The Herd struck again on the other side of the break as Pedro Dolabella, who was credited for the assist on the first goal, got on the action with a tidy finish. The forward tucked the ball into the back of the net after a quick restart off a free kick allowed Max Schneider to find his teammate in open space who dispatched it without error.

It took only minutes to respond as the Bucs were forced to play a more attacking style. Richards drove through the heart of the Marshall defense and found Portas, who cleverly clipped the ball through defenders and onto the foot of the Kiwi midfielder. Richards only had the keeper to beat and did just that and put Summers-Taylor into a frenzy in the 54th minute.

Eight minutes later, Marshall restored their two-goal advantage through Alexander Adjetey. With pace to burn down the right-hand side, Jan-Erik Leinhos picked out a perfect sweeping ball across the face of the goal and the sub Adjetey clattered into a defender as he tucked the ball into the roof of the net. The Herd grabbed their final goal through a perfect free kick, Ibrahima Diop curling an effort from 22 yards into the top left corner that gave the Buccaneer keeper no chance at a save.

Chaos struck in the 79th minute as Tarik Pannholzer (Flensburg, Germany) pickpocketed the Marshall goalkeeper, forcing Semmle to stretch a leg and catch the German who was in on goal with no one to beat. Despite an emotional and outraged Marshall Head Coach Chris Grassie’s disagreement on the card, the center ref had only a small conversation with his assistant before brandishing the red for the Marshall shot stopper with just over 10 minutes on the clock. Despite playing a man down, the Herd were able to sure up their defense and hold on to the 4-1 score as the final whistle blew.

Richards got off the mark for the first time since his freshman season, where he recorded six goals. The New Zealand man was held out of the net in the abbreviated spring season.

The Bucs get no respite on their schedule, hosting #21 Lipscomb on Friday inside Summers-Taylor for back-to-back matches against ranked opponents. The kick is slated for 7 p.m.