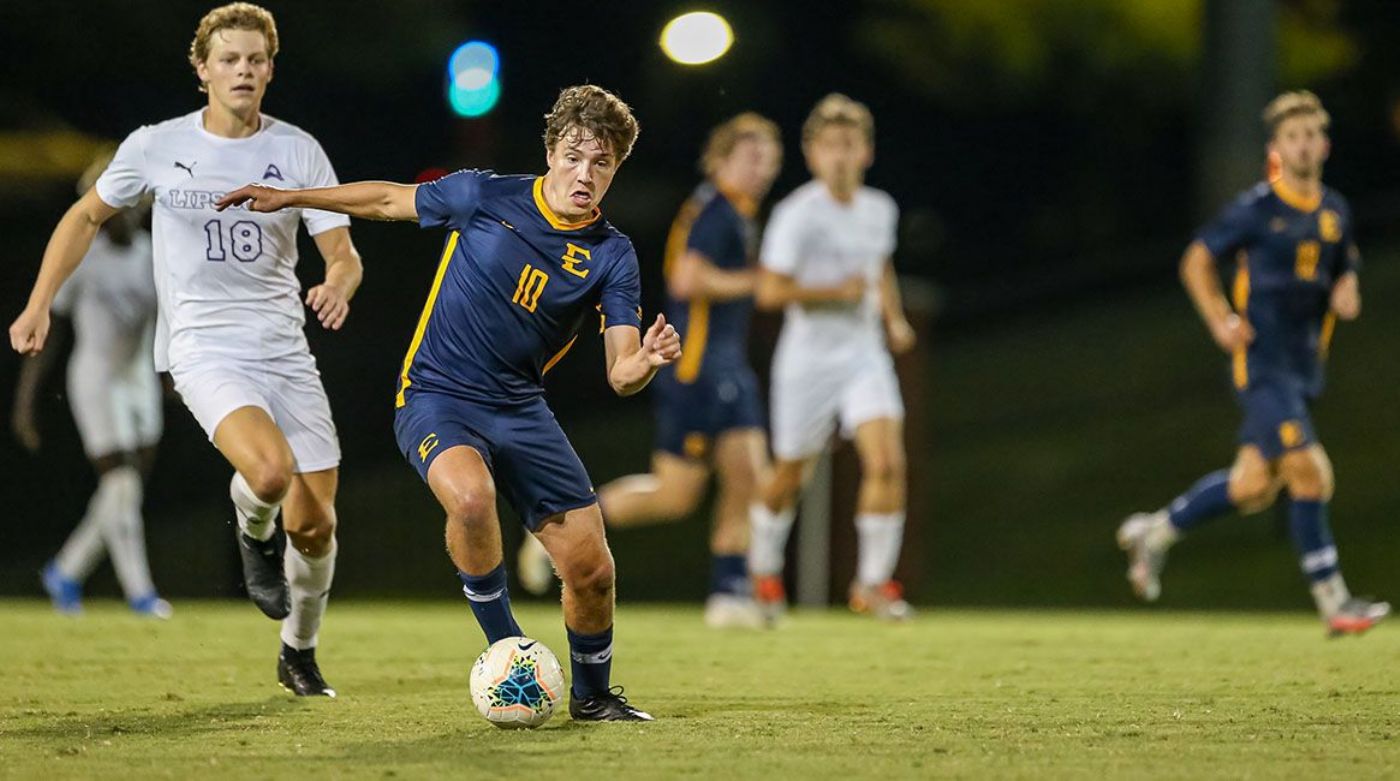 ETSU drops a two-goal lead, shares result against the Bisons

The Bucs grabbed a lead on two separate occasions while holding a 3-1 advantage late in the contest. Lipscomb rallied, scoring two goals in the final 15 minutes to grab a result out of the match.

For the second time on the season, the Bucs scored on their first shot on target. Tarik Pannholzer (Flensburg, Germany), who also recorded the feat in the win against Radford, had all the time in the world with a perfectly timed run past the Bisons defense. The German cleanly picked his mark and fired past the Bisons keeper to make it 1-0.

Lucas Lightner (Clarksville, Tenn.) restored the one goal advantage with his first goal of the season. The junior picked up a loose ball after a last-ditch Bisons tackle and clinically fired past the Lipscomb keeper 57 minutes into the match.

Pannholzer grabbed his first brace of the season in the 60th, curling an effort just outside of the box beautifully into the far corner to extend the lead to 3-1.

Josh Perryman (Sheffield, England) recorded a season-high six saves in the draw, moving to 2-1-1 on the season.

Michael Sibley got the nod in goal, allowing three goals with three saves in his 110 minutes.

The Bucs found a break early in the action as Lipscomb needed just over two minutes to create their first chance of the game. Splitting the ETSU backline, Bakary Bagayoko picked up the pass and his finish was tame as Perryman was able to collect. Just moments later, Kieran Richards (Hamilton, New Zealand) darted through the Bisons defense before playing a pass over the top to Pannholzer. The rapid winger timed his run to perfection and had acres of space, taking his time to finesse his attempt around the keeper to open the scoring.

Perryman was called into action a few more times as the half progressed but answered the call at every stop. Neither keeper was put under serious pressure over the course of the final 30 minutes of the opening frame.

The Bisons came out of the intermission with a punch. A sloppy giveaway in midfield saw Lipscomb with a two-on-one breakaway. Hayes Wood slotted his effort into the bottom left corner and the Bisons equalized just two minutes into the half.

The Blue and Gold responded 10 minutes later, once again through the play of Richards. Causing problems in the Bisons defense, a last-ditch slide tackle 16 yards out ricocheted and fell into the path of an onrushing Lightner. The junior rifled the shot past Sibley who came off his line, restoring the lead for the Blue and Gold.

The Bucs doubled the advantage only moments later as the Bucs continued to find open space down the right side. Lightner did well to hold the ball up and find Aidan O’Brien (Asheville, N.C.). The midfielder switched play onto Pannholzer on the left, who took two touches towards the center of the pitch and curled an effort over the Lipscomb shot stopper and into the back of the net to double the Buccaneer lead.

After Pannholzer narrowly missed his hat trick, the Bisons grabbed a lifeline with just under 15 minutes remaining. Henrik Günther (Guetersloh, Germany) left too much on a challenge inside the penalty area as the center ref pointed to the spot. Louis Robinson gave Perryman no chance as he sent the keeper the wrong way to close the gap.

The Bucs looked to have a foothold on the game with just over five minutes to play before the visitors equalized. Noah Gulden played an inch perfect ball to his twin brother Scott, crossing the face of the goal before the Bisons defender swept it in to even the score at 3-3 heading into the first overtime game of the season for the Blue and Gold.

Over the 20 minutes, the Bucs had the better of the chances but neither side could find the back of the net. ETSU’s best chance came with five minutes remaining as Pannholzer won a free kick just on the edge of the box. Sibley did well to push the ensuing attempt out wide to force a corner. The two would settle for a draw after 110 hard-fought minutes, walking off Summers-Taylor in a 3-3 draw.

Richards recorded his second assist of the season, the fifth of his career.

Pannholzer scored his sixth and seventh goal of his career in the match, tallying his fourth of the season. The German recorded his first brace, adding to his hat trick he scored in his freshman campaign.

The Bucs get a few days’ break before heading up to Virginia to take on VCU on Tuesday. Kickoff is slated for 7 p.m.