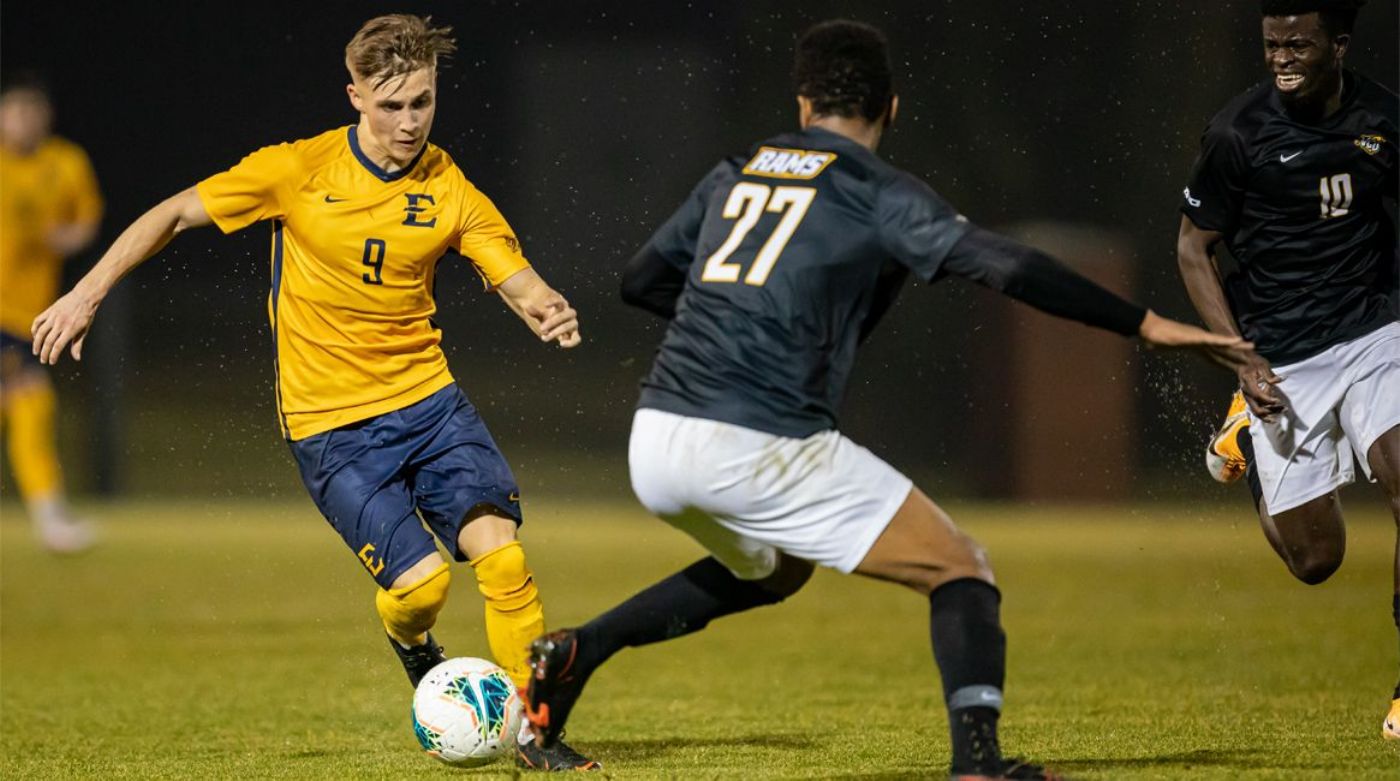 Bucs play a man down for final 31 minutes; Rams score four unanswered to rally past ETSU

The Bucs went toe-to-toe with the Rams in the opening half, but after Cole Hunter (Mount Juliet, Tenn.) – who was making his ETSU debut in goal – picked up his second yellow card in the 59th minute, the Blue and Gold were forced to play a man down for the remainder of the match. VCU took full advantage of the situation as they scored the go-ahead goal on a free kick following the foul on Hunter, while adding two more scores to cap off the win in its home opener.

ETSU dodged a bullet in the 14th minute when Hunter grabbed the ball out of the box and made a diving save on the free kick to keep the game scoreless. One minute later, the Bucs were able to strike first on Tarik Pannholzer’s (Flensburg, Germany) fifth goal of the year. The Blue and Gold gained possession on a throw in, and Gabriel Ramos (Sao Paulo, Brazil) fed Pannholzer a perfect ball from midfield to set up the fireworks. Pannholzer added some magnificent footwork to create space and fired a laser to the bottom right corner, marking his third goal in the last two games.

ETSU held the lead for the next 19 minutes, but after Dominic Foster (London, England) lost possession in the box, he committed a foul, setting up a Rams penalty kick. Oquin Robinson stepped up and tied it at 1-1 when he went bottom right to get it past Hunter.

Both teams had one more chance in the final 10 minutes but went to the break tied.

The Bucs took one more shot than VCU in the opening 45 minutes (6-5); however, ETSU’s physical play caught up with them as they were whistled for nine fouls, compared to only two by the host Rams.

Things quickly shifted in the second half as the Rams out-shot ETSU, 14-1.

VCU grabbed full momentum when they won possession off a Buccaneer goal kick, as Biska Biyombo was headed a ball in the open field and he had a breakaway. With only Hunter to beat, the ETSU keeper came out of the box to contest the ball and was given his second yellow card on a sliding tackle, ejecting him from game and forcing the Bucs to play a man down in the 59th minute.

The Rams were given a free kick right outside of the box and reigning Atlantic 10 Player of the Week, Celio Pompeu, greeted Josh Perryman (Sheffield, England) rudely, as he soared one to the top right corner for the goal, giving VCU the 2-1 lead. Eight minutes later the Rams registered another score, while Pompeu capped off the night with his second goal in the 74th minute, making it a 4-1 game.

Pannholzer, who now has three goals in his last two games, accounted for two of ETSU’s shots … The Buccaneer sophomore moved his career total to eight goals, moving him into a tie for eighth all-time in program history … Pannholzer also collected his 19th career point, which puts him tied for 10th all-time.

Kieran Richards (Hamilton, New Zealand) added two shots for the Blue and Gold, while Ramos has now recorded at least one assist in three of the Bucs’ last four outings.

Hunter made one save in his ETSU debut, while Perryman suffered the loss (2-2-1) … VCU’s Mario Sequeira bagged four saves en rotue to improving to 3-1-1.

ETSU opens Southern Conference play Saturday night when the Bucs head to the Music City to take on Belmont at 7 p.m. ET.