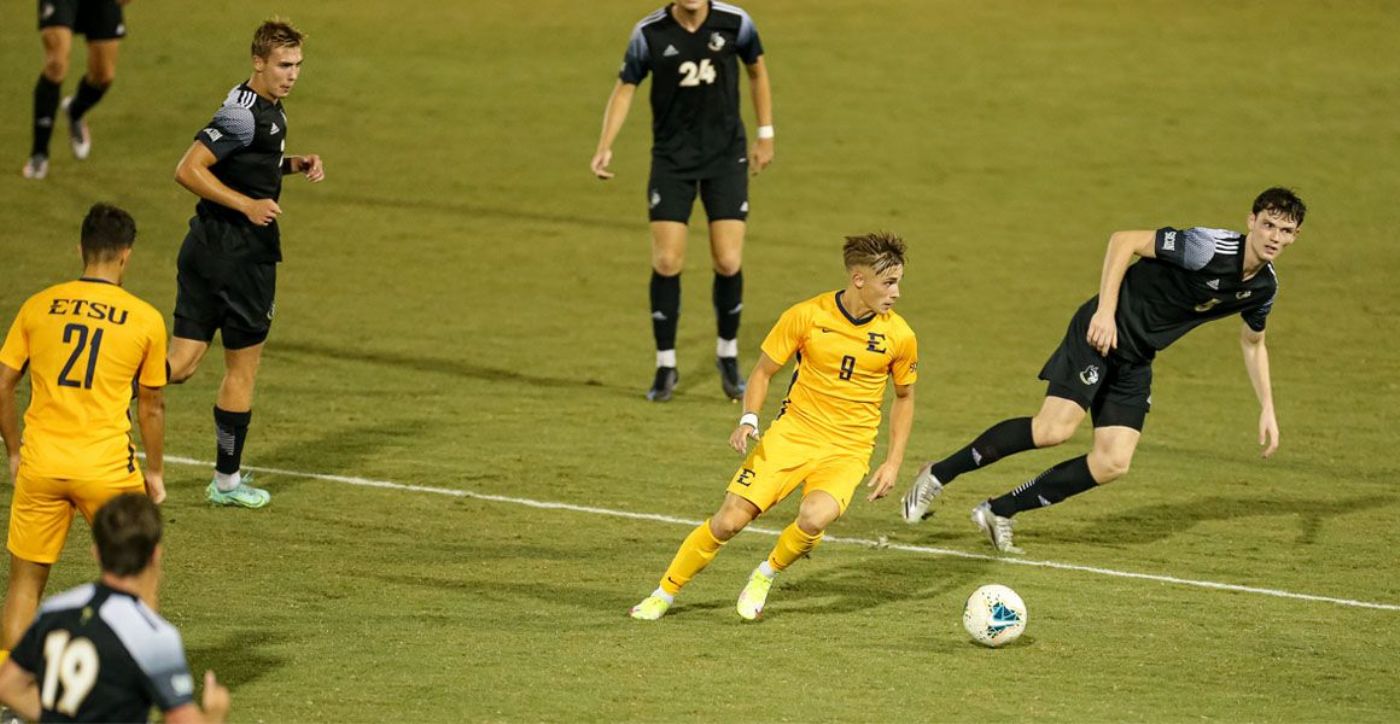 Buccaneer sophomore registers sixth and seventh goals of the season

The Buccaneers posted their second straight draw as ETSU moved its record to 2-4-3 overall and 0-1-2 in conference play.

Wofford earned its first tie of the campaign as the Terriers moved to 3-5-1 overall and 1-0-1 in SoCon action.

The Blue and Gold moved their unbeaten streak against Wofford to seven straight matches as ETSU is now 6-0-1 over the Terriers since the start of the 2016 season.

Redshirt senior goalkeeper Josh Perryman (Sheffield, England) played all 110 minutes and moved his record to 2-4-3 on the year, while Wofford’s Joshua Old is now 3-4-1.

Wofford got on the board first when Pannholzer fouled Mitchell Myers in the box and Myers stepped up to put the penalty kick past Perryman, giving the Terriers a 1-0 lead in the 16th minute.

Twelve minutes later the Bucs got on the board on an own goal when Carlos Portas (Barcelona, Spain) sent a cross into the box and Amin Mohammedi deflected the ball into the Terrier goal to even things at, 1-1. The goal snapped a 393 minute scoring drought going back to Pannholzer's 15-minute goal at VCU on Sept. 14.

The see-saw affair continued as Wofford regained the lead when Thaddeus Dennis found Will Pucek for his first score of the year, making it a 2-1 contest in the 32nd minute.

ETSU took the final shot of the half but wasn’t able to connect on goal and the Terriers led by one at intermission.

The Bucs wasted little time tying things up in half number two as the first Pannholzer goal came in the 57th minute … Josh Salinas (Stafford, Va.) tapped one back to the Buccaneer forward on the break and Pannholzer laced one just outside the box – hugging the left post – and buzzing past the Terrier keeper into the back of the net.

Pannholzer struck again eight minutes later when Christian Inchima (Barrie, Canada) fired one to the Buccaneer goals leader and he headed one home to the center of the goal, putting the Blue and Gold up, 3-2.

Unfortunately, the Bucs couldn’t hold the lead as ETSU surrendered the game-tying goal in the 83rd minute when the hosts couldn’t clear the ball out of the box and Brandon Oddy headed in the equalizer.

Neither team recorded a shot in the final seven minutes, resulting in extra time in Johnson City. In the first 10 minutes, both teams took one shot, while the Bucs had chances in the second overtime stanza but couldn’t find the golden goal. With Wofford playing a man down for the final nine minutes, Michael Clow (Leola, Pa.) tested the Terrier keeper but his shot to the upper right-hand corner was saved by Old, keeping it a 3-3 result.

Following his brace, Pannholzer moved his season goal total to seven and points mark to 15 … The seven goals are now tied for the eighth-most in single-season program history … Pannholzer also moved among the career goals and points leaders in ETSU history … His 10 career goals are now tied for seventh all-time, while his 23 points rank ninth among the Buccaneer greats.

For the match, Pannholzer accounted for six of ETSU’s 15 shots, while his two shots on goal both found the back of the net.

Wofford finished with 17 shots – seven of those were on net.

The Terriers committed 13 fouls to ETSU’s nine, while Wofford collected four yellow cards and one red … The Bucs were changed with one yellow.

ETSU steps out of conference play for two matches starting with a Tuesday matinee at Northern Kentucky … Kickoff is set for Noon in Highland Heights, Ky.