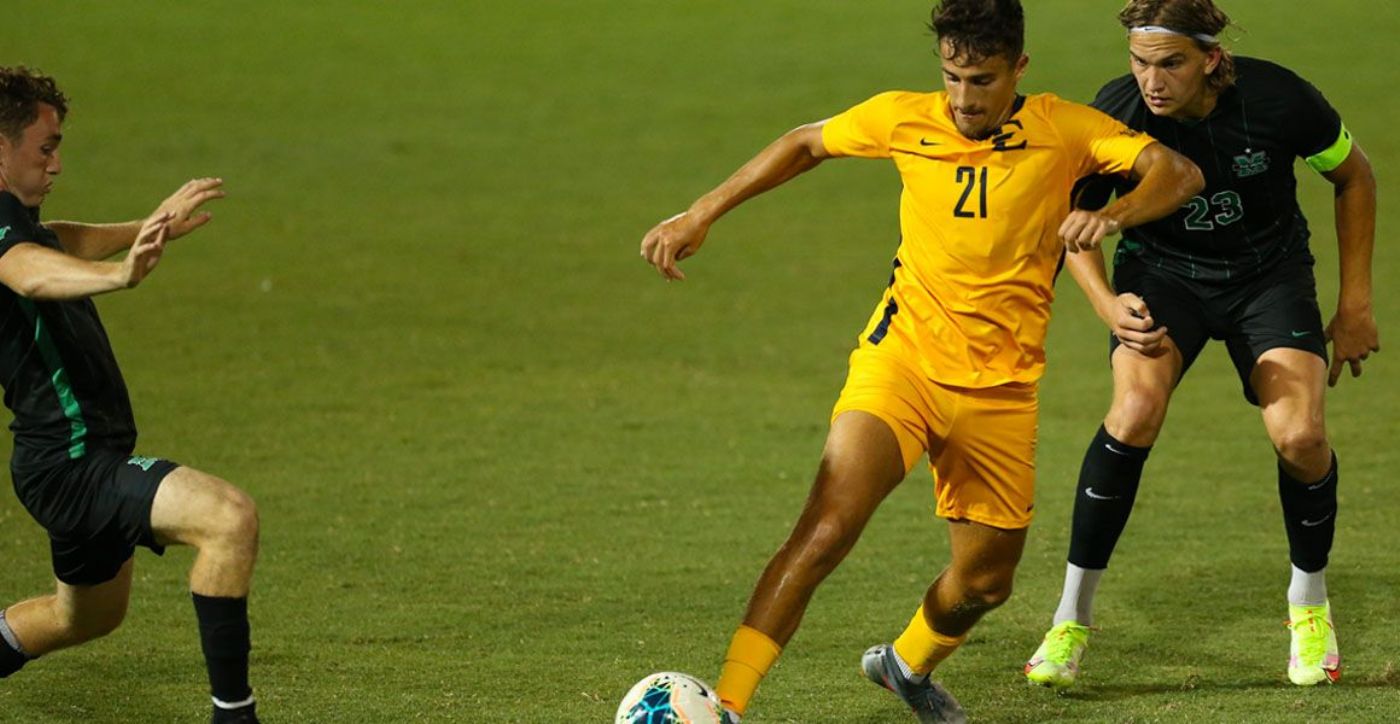 GREENVILLE, S.C. (Oct. 23, 2021) – Carlos Portas (Barcelona, Spain) found the back of the net in the 82nd minute, but it was too little too late to spark an ETSU men’s soccer comeback, as the Buccaneers dropped a 2-1 decision at Furman on Saturday night inside Stone Stadium.

Entering the match, ETSU redshirt senior goalkeeper Josh Perryman (Sheffield, England) was one save shy of recording number 200 on his career. He reached the milestone thanks to his save in the closing seconds of the first half, marking his lone tally of the contest. Perryman is now five saves shy of breaking the all-time program record, set by Johnny Sutherland (2015-17).

The match was very physical from the start as both teams registered 16 fouls in the first half. The Bucs committed 11, compared to only five by the Paladins. To go with the 16 fouls, three yellow cards were also booked in the opening stanza – one to Tarik Pannholzer (Flensburg, Germany) in the 27th minute – while a pair of Paladins picked up cards as well. Defender Arnor Adalsteinsson in the 39th and midfielder Jacob Garzon got his right before the halftime whistle.

The best scoring opportunity of the first half for either team came in the 32nd minute after a hard foul right outside of the 18-yard box by the Paladins. Pannholzer stepped up to take the kick and sent his shot wide left, barely missing the target.

After the break, Furman found the back of the net in the 55th minute thanks to a shot from striker Jake Raine, giving the Paladins a 1-0 lead. Raine’s goal came on a second-chance effort when Perryman couldn’t handle the shot from #6 and Raine put one home for his first score of the campaign.

Callum Holland became the third Paladin to be shown a yellow card in the 59th minute following a tackle from behind against a Buccaneer midfielder.

Furman extended its lead to 2-0 on a rocket of a shot that found the top right corner of goal via Jacob Garzon. Garzon scored his fourth goal of the season thanks to an assist from Miles Fenton.

The cards continued piling up in the match this time a red going to Kieran Richards (Hamilton, New Zealand). Richards checked into the match at the 66:13 mark, and was charged with the card 88 seconds later, after he lost the ball and put in a challenge from behind against the Paladin midfielder.

Playing a man down for the final 22 minutes, ETSU final rattled the cage when Carlos Portas scored his first goal as a Buccaneer in the 82nd minute, making the score line 2-1. Aiden O’Brien (Asheville, N.C.) was given the assist as he lofted a pass to Portas who then struck it through the left post from outside the 18-yard box.

Unfortunately, the Buccaneer comeback came up short and Furman held on for the one-goal win.

The Bucs outshot the Paladins 19-9 on the night and also put eight shots on target compared to only three by Furman.

Thirty-three total fouls were called on the night – 22 by the Bucs – while Furman was charged with five yellow cards. ETSU picked up two yellows and the lone red.

The ETSU men’s soccer team returns home to Summers-Taylor Stadium next Saturday as they take on UNCG at 7 p.m. in the final regular season match.