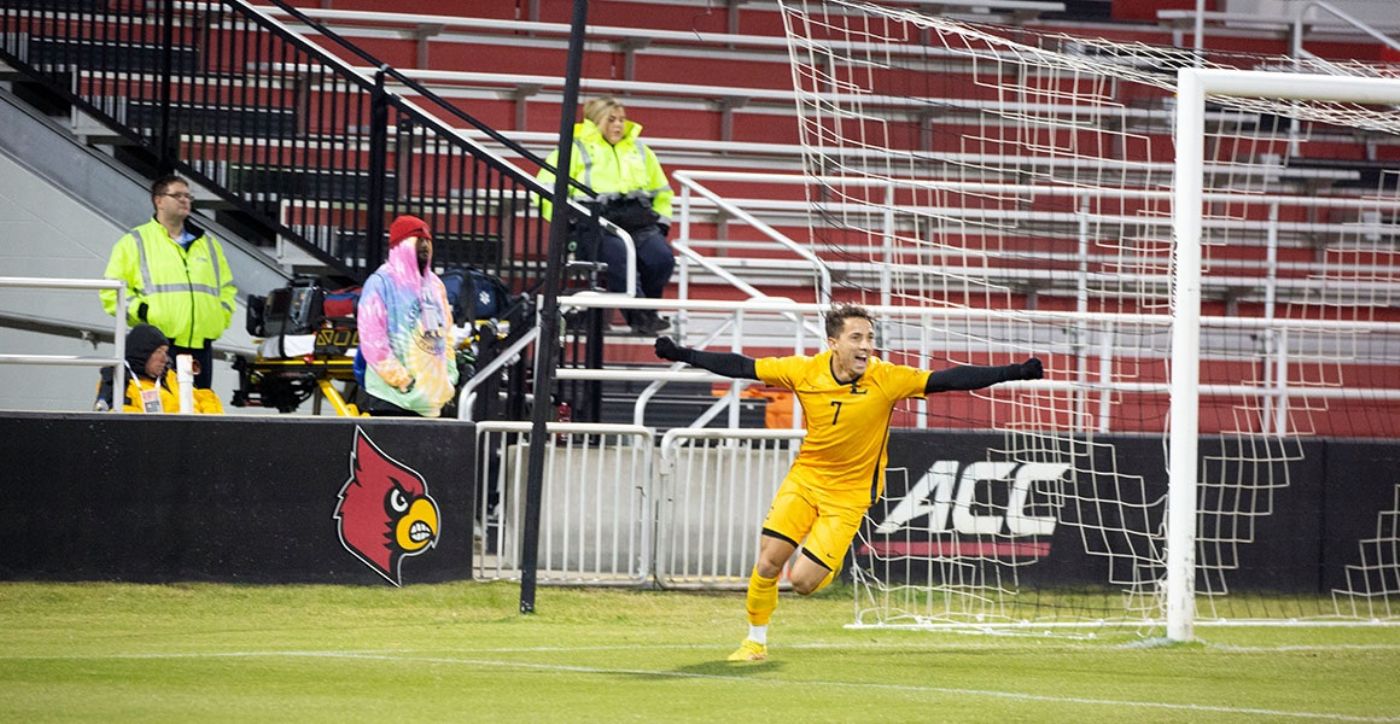 LOUISVILLE, Ky. (Oct. 18, 2022) – The ETSU men’s soccer team gave No.11 Louisville all they could handle in a game that ended in a 1-1 draw on Tuesday in Kentucky.
The Bucs held the lead for 40 minutes of the contest before Louisville was awarded a penalty kick, which was successfully scored to tie the match.
Unbeaten in the last three games, the Bucs move to 6-4-3 on the season.
SCORING
• 23’ – Gabriel Ramos (Sao Paulo, Brazil) scored his third goal of the season, assisted by Kieran Richards (Hamilton, New Zealand).
• 62’ – Camara Aboubacar scored the penalty shot for Louisville to level the game.
MATCH SUMMARY
• Scoreless in the first 20 minutes of the contest, both sides had opportunities, but both goalkeepers were prepared. In his second start for the Bucs, Marc Kouadio (Montreal, Canada) earned his first save in the 14th minute as he stopped the first clear opportunity for the Cardinals.
• In the 20th minute, Sebastian Reventlow-Mourier (Viborg, Denmark) had the Bucs’ first opportunity before the Louisville goalkeeper, Ryan Troutman, recorded his only save of the night.
• Continuing the momentum, ETSU capitalized in the 23rd minute as Richards beat his defender in the 18-yard and slid the ball across the goal to find the foot of Ramos, who found the back of the net for the third time this season.
• In the opening half, ETSU recorded six shots as Ramos and substitute Lucas Lightner (Clarksville, Tenn.) lead the way with two apiece.
• ETSU came out the second half eager for a goal as Reventlow-Mourier took the Bucs’ lone shot in the second half, which strayed off target.
• Leading up to the penalty, Kouadio saved a shot in the 55th minute to hold the Cardinals scoreless at that point of the game.
• In the 62nd minute, Louisville was awarded a penalty which was scored by Camara Aboubacar to knot the game at one.
• As Louisville continued to apply pressure after scoring their goal, the ETSU defense held firm, facing six shots and three on target in the final 10 minutes.
• Kouadio answered the call various times, and although they didn’t show up on the stat sheet, he stopped numerous crosses all night to cease any further opportunities.
QUICK KICKS
• Tonight marked the first time in program history that ETSU played back-to-back games against nationally ranked opponents and finished unbeaten in the two-game span.
• The Bucs have only allowed one first-half goal on the road this season.
• Nineteen different Bucs featured for ETSU as David Kovacic (Krsko, Slovenia) led the reserves with 51 minutes logged.
• With the tie, Louisville proceeds to 8-3-3 on the season.
UP NEXT
• The Bucs return to conference play this Saturday as they host Furman at 12 p.m. at Summers-Taylor Stadium.