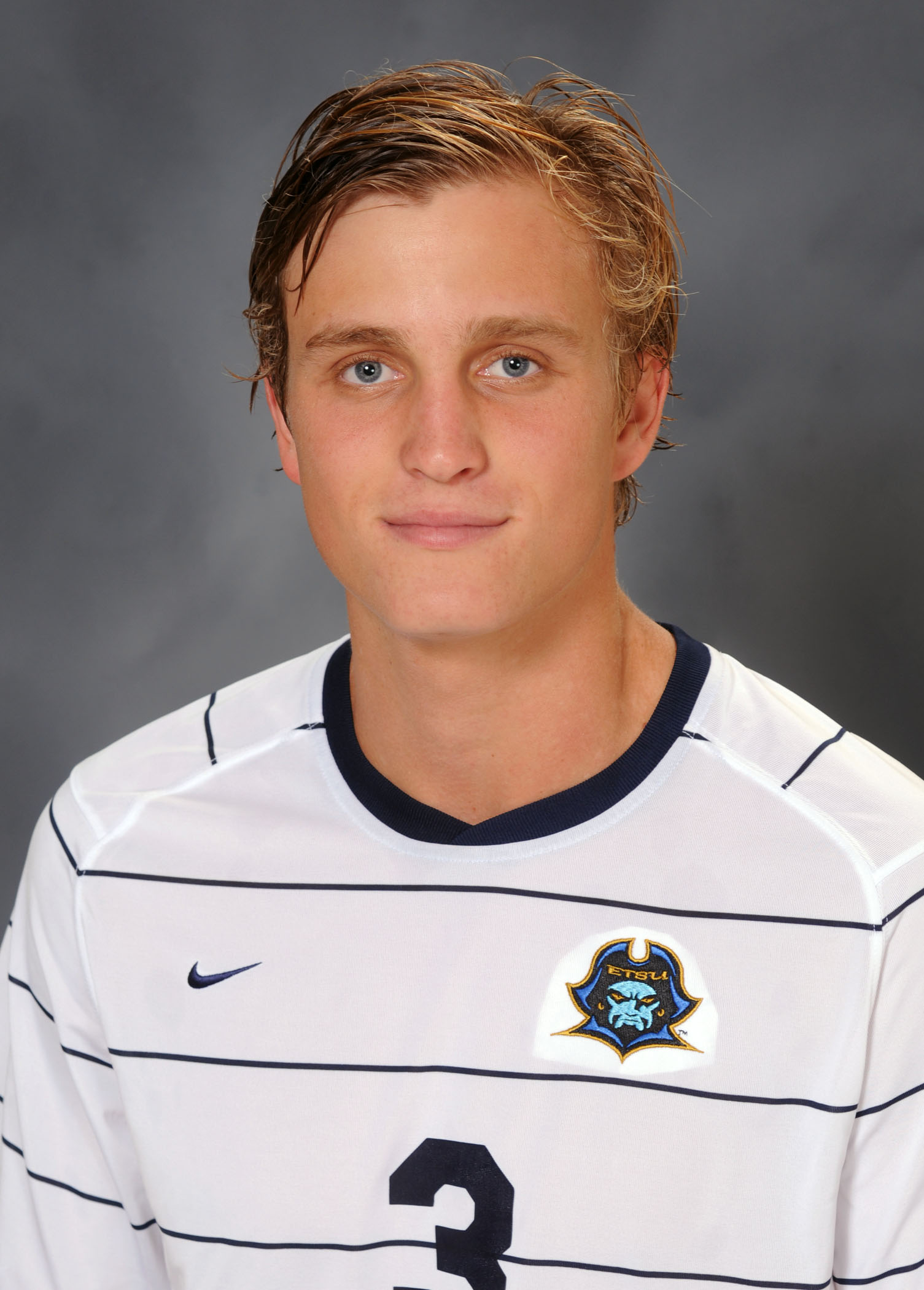 2011: One of four Buccaneers to play and start in all 21 games… scored seven goals, two game-winners, and recorded five assists to combine for 19 points… was second on the team in goals and points, while sharing for the team lead in assists… took 58 shots, putting 23 shots on goal… scored ETSU’s first goal of the year in the 11th minute against Presbyterian, and later registered his first assist of 2011 in a 3-0 win (Aug. 27)… put up three more points a week later, assisting ETSU’s first goal and scoring the second in a 2-0 win at Marshall (Sept. 4)… assisted Frank Doumbe’s breakaway goal, finding him with a long overhead pass, as ETSU defeated then-No. 16 William and Mary 2-0 in the Stihl Soccer Classic (Sept. 11)… was named to the Stihl Soccer Classic All-Tournament Team… scored the first of three ETSU goals in a 3-2 victory against Davidson (Sept. 17)… took a season-high six shots, scoring his fourth goal of the year in the Bucs’ first conference game of the year at Belmont (Sept. 29)… converted a penalty kick in the 89th minute to equalize the match against North Florida, as ETSU defeated the Ospreys 3-2 in overtime (Oct. 7)… put away another penalty in the very next game against Jacksonville (Oct. 9)… with the Bucs trailing USC Upstate 1-0 and just 16 minutes remaining – needing a win to earn a spot in the A-Sun Tournament – Schoenfeld found Alesi Osorio for the equalizer before sending in the eventual game-winner two minutes later, as ETSU clinched its spot with a 2-1 win… tallied his final collegiate assist in the A-Sun semifinals, heading a pass from Nate Hodges to David Geno for the then-equalizing goal, as the Bucs’ advanced to their second-consecutive final on a 3-3, 5-4 PK, thriller (Nov. 11)… named to the A-Sun All-Tournament Team  and First Team All-Conference for the second-consecutive year… named to the A-Sun’s first Academic All-Conference Team… earned NSCAA First Team All-South Region honors… finished his ETSU career with 20 goals, 10 assists and 50 points.

2010: One of four Buccaneers to play and start in all 21 games … led the team in goals (7), points (17), shots (72) and shots on goal (25) … tallied three assists and put away two game-winning goals … took eight shots, three on goal, in a, 1-0, victory against Clemson (Sep. 6) … found the back of the net for the first time in 2010, scoring a goal while also registering an assist in a, 2-0, victory over Winthrop (Sep. 15) … recorded an assist before heading in the game-winning goal in the 97’ minute as the Bucs defeated Marshall, 2-1 … fired eight shots while scoring in the 104’ minute, his third consecutive game with a goal - second consecutive game-winner, in a, 2-1, victory over UNC Asheville (Sep. 25) … named Atlantic Sun Offensive Player of the Week (Sep. 27) … scored two goals, through just 41 minutes of action, on his only two shots in a, 4-1, victory over USC Upstate (Oct. 27) … sent home the equalizer in the 88’ minute against then-No. 4 ranked North Carolina (Oct. 30) … assisted the game-winning goal, just 35 seconds into overtime, as the Bucs defeated Appalachian State, 1-0 (Nov. 2) … relentlessly attacked the net, firing a season-high 12 shots - five on goal, in a, 1-0, double-overtime victory over Lipscomb in the Atlantic Sun Tournament semifinals (Nov. 11)  …  made his NCAA Tournament debut, netting ETSU’s first NCAA Tournament goal on a penalty kick in the 57’ minute against the College of Charleston (Nov. 18) … earned Atlantic Sun All-Academic honors ... selected to the Atlantic Sun All-Tournament Team … named Atlantic Sun First Team All-Conference ... selected to NSCAA All-South Region Team.

2009: Started all 18 games as a forward ... was tied for the team lead with five goals, two game-winners and 11 points ... had the game-winning goal against North Florida on Oct. 23 and Lipscomb on Oct. 30 ... scored against Florida Gulf Coast on Oct. 16, Lipscomb on Nov. 7 and Stetson on Nov. 13 ... picked up an assist on a Theo Yang goal against Campbell on Oct. 10 ... had 51 shots with 23 coming on net ... earned Atlantic Sun All-Academic honors … named Atlantic Sun Second-Team All-Conference.

2008: Played in 12 matches, including eight starts after missing the start of the season due to illness ... scored the game-winning goal in overtime against USC Upstate on Oct. 19 ... totaled 13 shots with six on goal ... received Atlantic Sun All-Academic honors.

Prior to ETSU: Schoenfeld, a student from Bearden High School, had an outstanding career which was highlighted by a state championship and a state championship final appearance ... was named an All-KIL, All-District, All-Region, All-State and MVP selection … a seven-year Tennessee ODP player … helped Tennessee win the Region III Championship … played a pivotal role in his club team, KFC, winning two state championships at the club level.