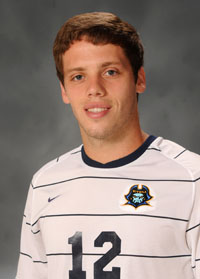 2011: Used his medical redshirt after suffering an injury.

2010: Played in all 21 games, starting in 19 … took eight shots, four on goal … fired a shot, playing all 117 minutes, in a, 1-0, double-overtime victory over ACC opponent Clemson (Sep. 6) … took his first shot on goal of the year in a, 2-1, victory over Mercer (Oct. 2) … landed another shot on goal, helping ETSU defeat Jacksonville, 1-0 (Oct. 15) … pelted a season-high three shots, one on goal, in a 4-1 rout of USC Upstate (Oct. 27) … a pivotal part of the ETSU defense that kept its opponents scoreless through the entire Atlantic Sun Tournament on their way to the program’s first Atlantic Sun Tournament Championship (Nov. 11-13) … appeared in his first NCAA Tournament game, playing 65 minutes, and helping keep the College of Charleston at bay throughout the entire second half (Nov. 18) … earned Atlantic Sun All-Academic honors.

2009: Started all 18 games for the Buccaneers as a defender ... tallied a goal in the Atlantic Sun semifinal match against Stetson (11/13) ... had an assist against Lipscomb (10/30) ... took ten shots on the season with five coming on goal .... earned Atlantic Sun All-Academic honors.

Prior to ETSU: Reed helped Blackman High School to two district championships, two regional championships and two state semifinal appearances ... was named to the All-Area and All-District teams … named District MVP in and all-state selection in 2007 ...  plays club soccer for TNFC, a team that boasts five state championships with the most recent coming in 2008.