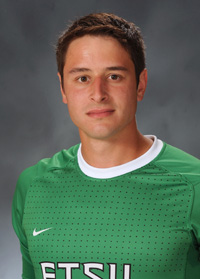 2010: Played in 17 games, starting in 14 … made a team-leading 36 saves, allowing just 15 goals, to cumulate a team-best GAA of 0.92 … won 12 matches while keeping seven clean sheets … made his first appearance and save while earning his first win as a Buccaneer in a, 1-0, double-overtime victory at Clemson (Sep. 6) … started his first game as a Buc in the ProRehab Aces Soccer Classic against Evansville (Sep. 12) … earned his first shutout, making four saves, in his first Atlantic Sun contest defeating Campbell 4-0 (Sep. 30) … made a season-high five saves to hold then-No. 4 North Carolina to one goal through regulation before succumbing to the Tar Heels, 2-1, in overtime (Oct. 30) … played flawlessly in his first Atlantic Sun Tournament, making seven saves through 204:44 of shutout goalkeeping, to help the Bucs to their first Atlantic Sun Tournament Championship (Nov. 11-13) … strung together a career-best 319:00 of scoreless soccer (Nov. 2 – Nov. 18) … made his first NCAA Tournament appearance making one save while holding the College of Charleston scoreless through the second half as the Bucs fell one goal shy, 3-2, of erasing a three-goal halftime deficit  (Nov. 18) ... was named to the Atlantic Sun All-Tournment Team.

Prior to ETSU: Hreha spent the 2009 season at Lees-McRae after lettering four years at TC Roberson High School ... He posted 25 career shutouts as a Ram with 16 in the 2008 season, earning All-Conference honors.