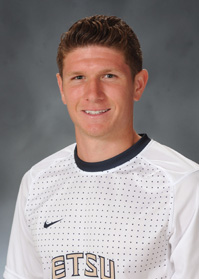 2011: Played and started in 19 of ETSU’s 21 games… recorded two assists, logging 1,565 minutes of game action… took 17 shots, landing three shots on goal… fired his first shot of the season in the Stihl Soccer Classic against then-No. 22 Old Dominion (Sept. 9), following up with his first shot on goal two days later in a victory against then-No. 16 William and Mary (Sept. 11)… assisted the game-winning goal against Florida Gulf Coast in the 57th minute by finding David Geno in the box to defeat the Eagles 2-1 (Oct. 16)… posted a career-high four shots, putting one on goal, and tallied his second assist of the season by finding Aaron Schoenfeld with the game-winning goal in the 77th minute against USC Upstate to clinch the Bucs a spot in the Atlantic Sun Tournament (Oct. 29)… combined for two shots and played all 290 minutes of ETSU’s three games in the A-Sun Tournament.

2010: One of four Buccaneers to play and start in all 21 games … scored one goal while creating three assists to amass five points … took 23 shots, seven on goal …made his first collegiate appearance and start, firing his first shot, in the season-opener against Furman (Sep. 1) … registered his first collegiate assist, finding Itode Fubara off a corner kick to assist the eventual game-winning goal, in the ProRehab Aces Soccer Classic (Sep. 10) … blasted a season-high three shots in a, 2-1, victory over Marshall (Sep. 20) ... took two shots, each on goal, in his first Atlantic Sun contest as the Bucs defeated Campbell, 4-0 (Sep. 30) … netted his first career goal, sending home the game-winner in the 78th minute to notch a, 2-1, victory over Mercer (Oct. 2) … tied his season-high in shots, firing three against Stetson (Oct. 8) … made his Atlantic Sun Tournament debut and was a central part of the ETSU defense that kept its opponents off the scoreboard throughout the Atlantic Sun Tournament (Nov. 11-13) … made his NCAA Tournament debut, finding Jaron Westbrook to register an assist in the 71st minute and close the gap against the College of Charleston to 3-2 … earned Atlantic Sun All-Academic Team honors … named to the Atlantic Sun All-Freshman Team.