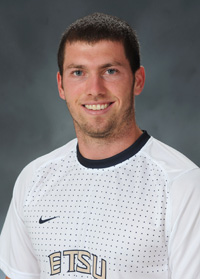 2011: Played in 20 games, earning 18 starts… led the team in goals and points by setting ETSU single-season records with nine goals and 21 points… netted four game-winning goals and tallied three assists… ranked second the team with 51 shots and put a team-leading 25 shots on goal through 1,470 minutes of game action… began the year by coming in off the bench to fire three shots and score an 87th minute goal in ETSU’s 3-0 win against Presbyterian (Aug. 27)… put all three of his shots on goal, including the eventual game-winning goal in the 20th minute against Marshall (Sept. 4)… filled up the stat categories with four shots, three shots on goal, the game-winning 87th minute goal, and an assist in ETSU’s 3-2 triumph over Davidson (Sept. 17)…  scored his second-consecutive game-winner by sending in the night’s only goal in the 77th minute to defeat Virginia Tech 1-0 (Sept. 20)… assisted Aaron Schoenfeld’s first-half goal in the Bucs’ Atlantic Sun opener against Belmont (Sept. 29)… put ETSU up early against North Florida with a goal off a free kick inside the right post as the Bucs pulled out a 3-2 double-overtime win (Oct. 7)… netted the game-winner in the 57th minute against Florida Gulf Coast off a cross from Blaike Woodruff (Oct. 16)… scored in the 10th minute to give the Buccaneers a 1-0 advantage against ACC foe Clemson (Oct. 29)… assisted David Haba’s first of two goals to help ETSU to a 2-0 Atlantic Sun Tournament quarterfinal win against No. 3 seed Jacksonville (Nov. 9)… blasted a career-high seven shots and four shots on goal, scoring a pair of second-half goals in ETSU’s penalty shootout victory in the A-Sun semifinals against Stetson (Nov. 11)… named First Team All-Atlantic Sun Conference… selected to the A-Sun All-Tournament Team.

2010: Played in all 21 games, starting in 16 … netted three goals and tallied a team-leading five assists to combine for 11 points, tied for second-best on the team … was third on the team in shots (39) and second in shots on goal (22) … saw his first collegiate game action, taking his first shot on goal, in the season opener against Furman (Sep. 1) … fired two shots in his first start, each on goal, while sending home his first collegiate goal, and game-winning goal, to help defeat Winthrop, 2-0 (Sep. 15) … netted his second career goal, firing four shots, two on goal, as the Bucs defeated UNC Asheville, 2-1 (Sep. 25) … attacked the net with a season-high five shots, one on goal, while scoring a goal and registering an assist in his first Atlantic Sun contest, as ETSU was victorious, 4-0, over Campbell (Sep. 30) … tied his season-high in shots, firing four on goal, while recording an assist in his second consecutive game in a, 2-1, win against Mercer (Oct. 2) … registered his third assist, finding Colin Pugh for the game-winner in the 41’ minute, in a, 1-0, victory over North Florida (Oct. 17) … found Mario Samperio in the 100’ minute to assist the game-winning goal in a, 2-1, victory over Lipscomb (Oct. 24) … recorded his team-leading fifth assist in his first Atlantic Sun Tournament contest, finding Theo Yang in the 110’ minute, to defeat Lipscomb, 1-0 (Nov. 11) … tied his season-high in shots yet again, firing five, two on goal, in his first NCAA Tournament match against the College of Charleston (Nov. 18)   … named to the Atlantic Sun All-Tournament Team … selected to the Atlantic Sun All-Freshman Team.

Prior to ETSU: ETSU: Geno was named the Conference Offensive Player of the Year in 2008 and 2009 ... a Tennessee All-State selection in 2008 and 2009 …  set the school all-time scoring record with 74 goals and 50 assists in three years … was a member of the Tennessee State 92 ODP Team and the Region III Regional Team in 2009.