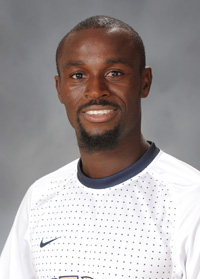 2011: Played and started in all 21 games for the second straight season… scored one goal and recorded a team-leading five assists to total seven points… tied the ETSU single-season record for assists in a season… took 28 shots with 10 shots coming on goal… missed just five minutes of game action all season, logging 2,005 total minutes to lead all Bucs aside from goalkeeper Ryan Coulter… named Atlantic Sun Preseason Player of the Year… began the year with three shots, one coming on goal, in ETSU’s 3-0 shutout of Presbyterian (Aug. 27)… had a breakout game at home against Davidson, taking three shots, two on goal, netting his first goal of the season and assisting David Geno on the game-winning goal in the 87th minute as the Buccaneers won 3-2 (Sept. 17)… had a four-shot game, landing one on goal, while playing all 110 minutes in ETSU’s scoreless double overtime draw against then-No. 25 Furman (Sept. 25)… assisted Theo Yang’s game-winning goal 25 seconds into the second overtime period in the Bucs’ 3-2 defeat of North Florida (Oct. 7)… notched his first assist from the corner when he found the head of Nick Dykes in the 53rd minute to equalize Florida Gulf Coast before ETSU eventually won the game 2-1 (Oct. 16)… won a ball and took it down the left side of the field before assisting Geno again with ETSU’s only goal in a 1-1 draw against Clemson (Oct. 24)… tied his career-high in shots with a five-shot match in ETSU’s 2-1 victory against USC Upstate which clinched the Bucs a spot in the Atlantic Sun Tournament (Oct. 29)… assisted Geno for the third time in 2011, finding the sophomore with the go-ahead goal in the 88th minute of ETSU’s thrilling A-Sun semifinal advancement past No. 2 seed Stetson (Nov. 11)… selected Second Team All-Conference.

2010: One of four Bucs to play and start in all 21 games… was second on the team in goals (4), assists (3), points (11) and shots (50)… third on the team with 13 shots on goal, while also notching two game-winners… made his Buccaneer debut, firing four shots, in the season opener against Furman (Sep. 1)… scored his first goal, a game-winnner, and registered his first assist as a Buc in the ProRehab Aces Soccer Classic, taking three shots, two on goal, as ETSU defeated Bradley, 2-1 (Sep. 10)… assisted an Aaron Schoenfeld goal in the 90’ minute to put away Winthrop, 2-0 (Sep. 15)… made it three of four games with an assist, again finding Aaron Schoenfeld, in the 97’ minute, for the game-winning goal in a, 2-1, victory over Marshall (Sep. 20)… scored the second of four ETSU goals in his first Atlantic Sun Tournament game as the Bucs shutout Campbell, 4-0 (Sep. 30)… fired a season-high five shots, one on goal, in a, 1-0, victory over Belmont (Oct. 22)… scored a goal off three shots, two on goal, in a 4-1 win against USC Upstate (Oct. 27)… took a team-leading three shots against then-No. 4 ranked North Carolina (Oct. 30)… attacked the goal for four shots in his first Atlantic Sun Tournament game as the Bucs defeated Lipscomb, 1-0, in double-overtime (Nov. 11)… won ETSU its first Atlantic Sun Championship, sending home the game-winning goal in the 95’ minute of the Atlantic Sun Tournament finals, as ETSU defeated Stetson, 1-0, in overtime (Nov. 13)… made his first NCAA Tournament appearance, firing three shots, one on goal, in a competitive, 3-2, defeat at the hand of the College of Charleston (Nov. 18)… earned Atlantic Sun All-Academic honors… named to the Atlantic Sun All-Tournament Team… earned Atlantic Sun Tournament MVP honors… named Atlantic Sun Freshman of the Year… selected First Team All-Conference.