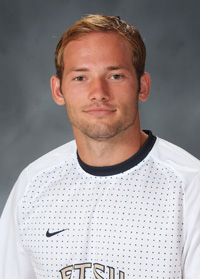 2011: Played in all 21 games, earning 20 starts… sent home one goal and registered one assist to amass three points… fired 13 shots, putting six on goal… had three multi-shot games… ranked third on the team in minutes played, clocking 1,939 total minutes… landed each of his two shots on goal in ETSU’s last-minute double overtime victory against then-No. 20 UNC Greensboro (Aug. 31)… scored his first collegiate goal, finding the back of the net from the top-left corner of the 18-yard box in the 15th minute to equalize Lipscomb (Oct. 2)… took two shots and recorded his first collegiate assist on David Geno’s first of two goals against No. 2 seed Stetson in the Atlantic Sun semifinals (Nov. 11)... earned Atlantic Sun All-Academic honors.

2010: Played in 19 of 21 contests, starting in 12 … got off six shots, one on goal … made his first collegiate appearance and start, firing his first shot, in the season opener against Furman (Sep. 1) … played a season-high 107 minutes, taking one shot, to help the ETSU defense hold Clemson scoreless, as the Bucs won, 1-0, in double overtime (Sep. 6) … played in his first Atlantic Sun Conference game as the Bucs took care of Campbell, 4-0 (Sep. 30) … got his first Atlantic Sun Conference game start, blasting two shots, including his first collegiate shot on goal, against then-No. 25 ranked Florida Gulf Coast (Oct. 10) … played in his first Atlantic Sun Conference Tournament, becoming an irreplaceable part of the ETSU defense that held their opponents goalless throughout the entire tournament (Nov. 11-13) … came in off the bench to play a solid 74 minutes of defense in his first NCAA Tournament contest, helping to hold the College of Charleston off the scoreboard throughout the entire second half (Nov. 18) … earned Atlantic Sun All-Academic honors.

Prior to ETSU: Hodges spent four years as a starter at West Lauderdale High School. Hodges also was the starting quarterback for West Lauderdale in 2009. A team captain for two years, Hodges earned all-district honors four years in a row, and in 2010 was one of three finalists for the prestigious Gatorade Player of Year Award in Mississippi. Hodges is also a member of the Mississippi 92 ODP Team, and played club soccer for the Chicago Fire Juniors of Mississippi.