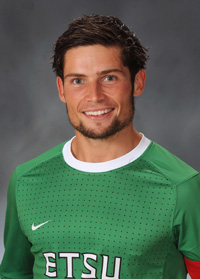 2011: Played and started in all 21 games, seeing the field for all 2,010 minutes of the season… posted a 10-7-4 record, recording an ETSU single-season record eight shutouts… made 70 saves to rank second in a single season at ETSU, and posted a .745 save percentage to rank first all-time… allowed 24 goals to accumulate a goals against average of 1.07, ranking him third in ETSU’s single-season record books… made his Buccaneer debut with a shutout performance in ETSU’s 3-0 season opening defeat of Presbyterian (Aug. 27)… recorded his first collegiate save, totaling four for the game, and posted his second straight shutout to help lift ETSU to its first win over a ranked opponent, defeating then-No. 20 UNC Greensboro 1-0 in double overtime (Aug. 31)… made a season-high nine saves and put together his third consecutive shutout in the Bucs’ 2-0 defeat of Marshall (Sept. 4)… earned his first Atlantic Sun Defensive Player of the Week honors (Sept. 6)… strung together 333 minutes of shutout soccer (Aug. 27-Sept. 9)… earned his fourth shutout of the season with a six-save effort to lead the Bucs over then-No. 16 William and Mary 2-0 in the Stihl Soccer Classic (Sept. 11)… shutout ACC opponent Virginia Tech in a 1-0 ETSU victory (Sept. 20)… made seven saves and recorded his sixth shutout of the season in a scoreless double overtime draw against then-No. 25 Furman (Sept. 25)… named A-Sun Defensive Player of the Week for the second time in 2011 (Sept. 26)… made his Atlantic Sun debut in Nashville, Tenn. against Belmont (Sept. 29)… held Stetson scoreless through 110 minutes in a draw against the Hatters (Oct. 14)… made his postseason debut, earning two saves and notching his ETSU record eighth shutout of the season to help defeat No. 6 seed Jacksonville 2-0 in the A-Sun quarterfinals (Nov. 9)… had a memorable four saves, including the final game-winning save, in an eight-round penalty kick shootout to help ETSU advance past No. 2 seed Stetson in the A-Sun semifinals… selected to the A-Sun All-Tournament Team.

Prior to ETSU: Spent two seasons at the University of San Diego... made one appearance logging 4:44 for the Toreros... attended Colaiste Ide High School where he earned goalkeeper of the year awards from 2005-2008... was league winner in 2007 for St. Josephs Boys squad... a member of the FAI/FAS Development program in 2008... represented Irelend in Belgrade and Serbia in 2009 World Student Games.

Personal: Born February 8, 1989... son of Phil and Geroldine Coulter... majoring in interdisciplinary studies... his father, Phil, is an Irish musician and producer who is one of the biggest record sellers in Ireland.