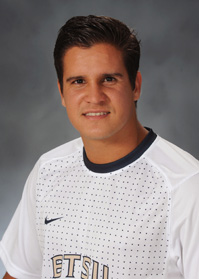 2011: Redshirted the season after transferring from Appalachian State.

Prior to ETSU: Saw action in 12 matches for Appalachian State in 2009, drawing the start in seven... netted his first career goal in 3-2 loss to Radford... ranked in top 10 on team in shots attempted with 13... landed five of his 13 shots on goal... played for the IMG Academy under coach Tom Durkin before signing with Appalachian State... was MVP of team while studying in Venezuela.