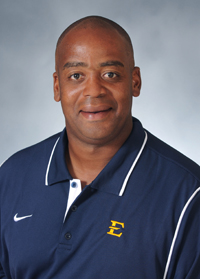 Adegboyega "Bo" Oshoniyi (AD-eh-BO-yay-ga O-shah-nee) returns for his fourth season at the helm of the ETSU men's soccer program.

In his third year at ETSU, head coach Oshoniyi led the Bucs to their first-ever regular season title and first-ever at-large bid to the NCAA Tournament in 2016. It was Oshoniyi's first time as a head coach to go to the NCAA Tournament, and ETSU claimed one of the 24 at-large bids in the tournament. He guided the Bucs to their second-straight SoCon Championship appearance before falling in penalty kicks to Mercer.

Also, he led the Bucs to their best win in program history as ETSU traveled to Chapel Hill, N.C. and defeated then-No. 1 North Carolina, 1-0, in extra time. He also led the Bucs to their highest-ever RPI ranking of 23rd, which was accomplished at the conclusion of the regular season. ETSU also never dropped out of the top-50 in RPI and spent most of its time in the top-25 ranking.

Oshoniyi guided the Bucs to their first-ever unbeaten season at Summers-Taylor Stadium (7-0-1) as the team went undefeated until they tied 0-0 with Furman. During the 2016 campaign, the Bucs took four ranked teams into overtime including No. 1 North Carolina, No. 12 Kentucky, No. 22 West Virginia and No. 25 Furman. The Blue and Gold received votes in multiple polls throughout the season and finished the year receiving votes in the NSCAA and College Soccer News polls.

During his second year at the helm, Oshoniyi led the Blue and Gold to the SoCon Championship game where they ultimately fell to Furman 1-0. The Bucs had big wins during the 2015 season where they beat nationally ranked Kentucky at home and also completing the upset over the No. 1 seed in the conference tournament UNCG in penalty kicks.

In his first season in 2014, Oshoniyi led the team to a 7-10-1 record. His first career victory came in his first game against William & Mary. The team won 3-2 by scoring three consecutive goals in the game. One of his best wins of the season came against the 2014-15 SoCon tournament champions, Furman Paladins. The Bucs won by a narrow score of 1-0.

In 2015, Oshoniyi coached with the U15 national team as an assistant coach. While working in Florida for several weeks, he coached in three friendly matches at the Premier Sports Complex in Lakewood Ranch. He has been asked to coach for the U18 team for the United States as an assistant, and during the same year, Oshoniyi was a head coach at the MLS Combine.

Oshoniyi, who spent three seasons (2011-13) as an assistant under Coach Bob Warming at Penn State, was named the second head coach in program history on March 27, 2014, succeeding Scott Calabrese following his acceptance of the Florida International head coaching position. Oshoniyi inherits a program which won the Atlantic Sun Conference Tournament title and earned its second trip to the NCAA Championships in the past four years (2010, 2013).

At Penn State, Oshoniyi helped the Nittany Lions to back-to-back Big Ten titles, including the program's first regular season Big Ten title in seven years in 2012. The Lions were staunch defensively, allowing just over one goal-per-game during the season as they went unbeaten in their final four regular season conference contests. While in Happy Valley, Oshoniyi’s responsibilities included working with goalkeepers and playing a key role in recruiting.

In his first season at Penn State, Oshoniyi helped tutor freshman goalkeeper Andrew Wolverton, the Big Ten leader in goals-against-average and save percentage. Wolverton also became the school's all-time single-season shutout leader with 12 a season ago.

Oshoniyi joined the Penn State staff after serving for two seasons as an assistant coach under Jay Vidovich at Wake Forest. Working primarily with the goalkeepers, he helped lead the ACC power to a total of 25 wins. In his first season at Wake Forest in 2009, the Demon Deacons posted a 17-4-3 record, captured the ACC regular season title, and advanced to the College Cup. Under Oshoniyi's tutelage that season, the Demon Deacon goalkeepers compiled a 0.77 goals against average and registered 10 shutouts.

Prior to his time at Wake Forest, Oshoniyi was an assistant at South Florida for one season. In 2008, the Bulls went 15-5-3, won the program's first BIG EAST tournament title, and advanced to the quarterfinals of the NCAA Championship. 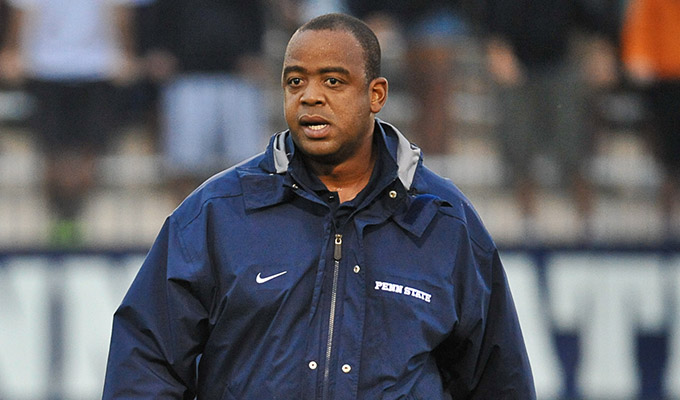 As a collegiate player at Southern Connecticut State University, Oshoniyi was a two-time All-America goalkeeper, leading the Owls to two NCAA Division II National Championships and four straight New England Collegiate Conference titles. The Division II record holder for shutouts in a career with 50, he was named the Final Four Most Valuable Player twice and was honored with the Golden Boot Award, an award presented to the nation's top collegiate goalkeeper, following his senior season. Oshoniyi was inducted into SCSU Hall of Fame in 2009.

After graduation, Oshoniyi embarked on a professional career in the United States that spanned 12 years and included stints with two Major League Soccer teams. Chosen by Columbus in the inaugural MLS draft, he spent the 1996 season with the club, recording the first win in Crew history. Oshoniyi, the first African-American goalkeeper to start a game in the MLS, was also a member of the Kansas City Wizards from 2000-2006, winning two Western Conference titles (2000, 2004) and the MLS Championship in 2000.

He also played professionally with the USL's New York Centaurs (1995), Connecticut Wolves (1997), Charleston Battery (1998), and Atlanta Silverbacks (1999) and trained with Ajax Amsterdam of the Dutch national football league. He was also a member of the U.S. team that competed at the World University Games in 1993 and played with the U.S. National B team in 1994.

Oshoniyi holds a USSF National "A" license and has served as an assistant coach for the U.S. U-17 National Team, as well as a Region I Olympic Development evaluator. A highly sought after clinician, he has also been a staff member for the Kansas City Wizards Soccer Camps along with the SoccerPlus, Star, and No. 1 Goalkeeper Academies. He also previously served as Director of Coaching at Harrisonville Soccer Club in Kansas City and was the head varsity girls coach at Saint Thomas Aquinas High School in Missouri and the boys' varsity assistant at Shelton High School in Connecticut.

Oshoniyi graduated from Southern Connecticut State in 1994 with a degree in marketing, finance and communications. He and his wife, Tippi, have two sons, Xander, 9, and Rennick, 3, and a six-year-old daughter, Londyn.