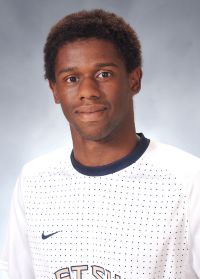 2015: Missed most of September due to injury...Still played and started in 15 matches for ETSU...Took two shots all season: one versus High Point and one versus Furman...Tallied 1200 minutes including ten matches where he played the full time.

Prior to ETSU: Transferring from Franklin Pierce University in New Hampshire...Played in 16 games with 14 starts with the Ravens...Had four shots with two on goal as a defender...While in France, he was a member of the U18 Franch national championship team and the U19 Franch national conference championship team...Graduated high school from Lycee Chrestien de Troyes in Troyes, France in 2013.

Personal: Born July 19, 1992...Expected to major in foreign language at ETSU...He is the son of Oualy and Mariam Sissoko.