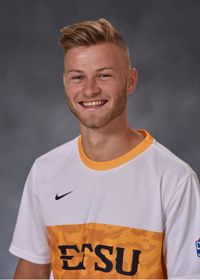 2016: Appeared in 17 games with 13 starts while accumulating a career-high 1212 minutes on the pitch...Had one goal on seven shots with three shots on goal...Had one assist on the season, which he produced on the game winning goal against conference foe Wofford in a 2-1 victory...Made the 2016 SoCon All-Tournament team.

2015: Season shortened due to injury...Started and played in 14 games while accumulating 1182 minutes on the pitch...Corralled an assist in the 3-1 upset over nationally ranked Kentucky...Finished the season with a .750 shot on goal percentage...Member of the SoCon Fall Academic All-Conference Team

2013: Appeared in 16 games for ETSU during the Bucs' A-Sun Tournament title-winning campaign... Made four starts.