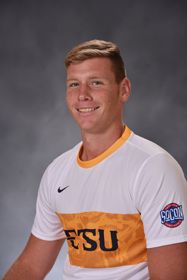 2017: One of five players to start in all 18 games for the Blue and Gold, missing only 78 minutes all season while playing in seven 110-minute games...Received All-SoCon second team and tournament team selections for his strong play in the midfield...Scored three goals and recorded one assist, attempting 13 shots with six on target for a solid 0.46 shot on goal percentage...Scored the tying and winning goals against Wofford within 10 minutes of each other to lead ETSU to a 3-2 road win over the Terriers.

2016: Played and started in three games for the Bucs...Amassed 225 minutes on the pitch...Played all 90 minutes in the season opener against High Point and in a 1-0 win against Appalachian State…attempted a shot in an exhibition game at Virginia Tech.

Prior to ETSU: Transferred from Lincoln Memorial...Scored three goals and picked up one assist in his sophomore campaign (2015)…Finished his final season at LMU with 1,476 total minutes on the pitch and 27 shots, with 11 being shots on goal…In 2014, his freshman season, Spielman started 10 games and appeared in 16 with 1,148 total minutes.

Personal: Born on August 2, 1996…Native of Melbourne, Fla...Majoring in Business Management at ETSU...Son of Donald Robert Spielman and Monica Lee Spielman...Has a sister (Patty) who played women’s soccer at Lincoln Memorial from 2004-08 and a brother (Donald) who played locally at Florida Tech in Melbourne from 2003-06.