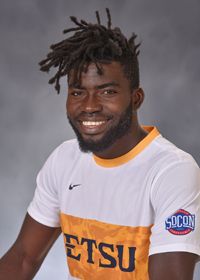 2017: Appeared in all 18 games with 16 starts...Earned a spot on the All-SoCon first team for a second straight season...Contributed three assists in 2017, the second most on the team...First assist came via a beautiful set-up for ETSU's first goal of the season at Dayton with a 35-yard pass to Cameron Woodfin...Took 22 shots with nine shots on goal.

2016: Played in 17 games, including 15 starts for the Bucs...Named to the All-SoCon first team…Scored three goals and tallied one assist on the season....Scored the third of five ETSU goals against UNC-Greensboro in the SoCon semifinals to propel the Bucs to the conference championship game...Played 1286 minutes on the pitch.

Prior to ETSU: Spent his freshman year at NAIA’s Lindsey Wilson College under head coach Ray Wells...Played in 18 games and started 13 for the Blue Raiders…finished the season with eight goals, five assists and two game winning shots…Tied for third on the team in points and goals…Helped lead the team to a 14-5-2 record and an appearance in the NAIA national championship opening round.

Personal: Born October 17, 1992... Son of Saer Seck and Mareme Gadiaga…from Dakar, Senegal...His dominant hand is his right, but his dominant foot is his left.