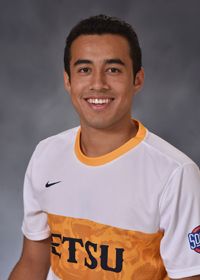 2017: Appeared in 13 games with four starts for ETSU, logging exactly 500 minutes...Scored his lone goal of the season at George Mason with a 15 yard kick into the right corner past the goalkeeper...Took seven shots with four shots on goal for a solid .420 shot on goal percentage.

2016: Played in 19 games with seven appearances in the starting XI...Racked up 903 minutes on the pitch...Recorded three goals and two assists for the Bucs...His eight points were the fourth most on the team...Attempted 18 shots with four on target...Assisted on the team's first goal of the season against High Point...scored his first collegiate goal against George Mason in the ETSU home opener...Nailed an unassisted goal against conference foe UNC-Greensboro in a 4-3 victory on Oct. 8.

Prior to ETSU: Graduated from Science Hill HS in Johnson City, Tenn. in 2015...Member of the Hilltoppers soccer team from 2011-15...Played as a midfielder for head coach Brandon Kind...His HS team won their conference district...Was named most improved player at Science Hill.

Pesonal: Born in Johnson City, Tenn. on June 18, 1997...Son of Martha Huerta...Has two cousins that have experience on the college level with Horton McKinney lettering four years at Tusculum College and Steven McKinney currently at WVU Tech...Alberto is majoring in Exercise Science at ETSU...Plans to pursue a career in physical therapy after graduation...Is right-handed and left-footed...Can speak multiple languages.