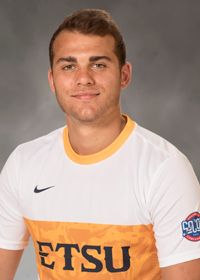 2016: Played and Started in one match for the Bucs against High Point…played 49 minutes in the season opener.

2015: Played in 18 matches with 14 starts...Made first start of the season against Kentucky in the 3-1 upset in which he tallied 58 minutes on the pitch...Took two shots all season: one versus Wofford on Oct. 20 and one shot on goal at Mercer on Oct. 27...Played the full time in four matches and averaged 66 minutes per game...Member of the SoCon Fall Academic All-Conference Team.

2014:  Recorded an assist and goal in his first collegiate game, a 3-2, season-opening win over William & Mary...Appeared in 12 games with nine starts...Played an average 63 minutes per game.

Prior to ETSU: Graduated from Francois-Bourrin HS where he was named High School Athlete of the Year...Played at Garneau College for head coach Charles Harvey...Was named a first-team all-star in 2013…Nominated for Rookie of the Year in 2011...Helped lead Garneau College to a conference championship and a third place finish in the Canadian National Championship in 2012...Participated in a three-month professional tryout in Curitiba, Brazil in 2009.

Personal: Born March 8, 1994...from Quebec, Canada…Son of Serge Sevigny and Christine Labbe…Majoring in Communications at ETSU with honors...Recipient of the Paul Walwick Emerging Scholar Award in 2017…Currently holds a position with J7 Media, an advertising agency.