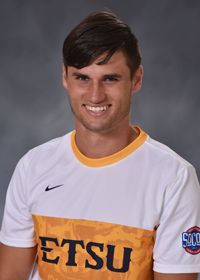 2016: Played in and started all 20 matches for the Bucs...Accumulated 1605 minutes on the pitch, the fourth highest total on the team...Finished the season with a team-high nine goals on the season...Finished second in the Southern Conference in goals per game (0.45)...Tied for first in the SoCon with nine goals...Fourth in the conference in points per game with 20 points in as many games (1.00)...Scored the game-winning goal against top-ranked North Carolina in a 1-0 upset victory...Had a .435 shots on goal percentage...Had three game winning goals and went 2-2 on penalty kicks....Finished the season fourth on the all-time list for most points scored in an ETSU career…First team All-SoCon selection.

2015: Played in 19 matches including 18 starts...Accumulated 1507 minutes on the pitch, an average of 79 minutes per match...Finished the season with ten goals and three assists...Led the conference and team in scoring and goals per game (0.53)...Third in the conference in shots taken per game (2.89)...Second in the SoCon in points (23) and points per game (1.21)...Scored his first goal of the season at Appalachian State on Sept. 9...Had a .418 shots on goal percentage...Took a season-high ten shots versus VMI in the overtime 3-2 victory against the Keydets....Member of the SoCon Fall Academic All-Conference Team

2014: Appeared in 13 games with nine starts...Had a goal against VMI on Oct. 7...Took six shots all season with three on goal...Finished the season with two points...Played the full 90 minutes in seven games...Averaged 74.5 minutes in each match played.

Prior to ETSU: Played at Farragut High School in Knoxville…All-District... All-Region... All-State selection.