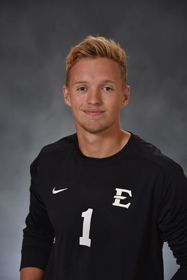 2016: Started and played in all 20 games for the Bucs...Led the SoCon in save percentage (.787), goals against average (0.92), shutouts (9) and shutouts per game (0.45)...Second in the league with 70 saves and third with 3.50 saves per game...Has finished back-to-back seasons with 70 goals, which is the second highest single-season total in ETSU history...Currently holds ETSU career record for highest save percentage with .766…Kept top-ranked North Carolina off the board Sept. 13 in a 1-0 shutout victory.

2015: Only freshman to start and play every minute for ETSU...Third-best save percentage in the SoCon (.745)...Fourth-most saves per game in the conference (3.68)...Tallied five shutouts, which was third in the SoCon...Finished the season with a 1.19 goals allowed average, which was fourth in the conference...Totaled 70 saves including a season-best nine versus UNCG in the 1-1 draw.

Prior to ETSU: Graduated from Christelton in Chester, UK...Played for the Machester United Under-21...Represented England at the U-17 and U-19 levels.

Personal: From Chester, Cheshire, England...Majoring in mass communication with a focus in journalism…son of Sally and Mark Sutherland.

2016 SoCon Goalkeeper of the Year