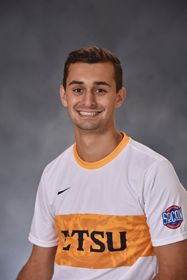 2016: Played in five games and logged 61 minutes for the Bucs...started and played 45 minutes in an exhibition against Virginia Tech before the regular season...Received playing time in the 2016 SoCon tournament semifinal round against UNC-Greensboro.

Prior to ETSU: Graduated in 2015 from Farragut HS in Koxville, Tenn...Four year varsity letter for soccer team...First team all-district...Memeber of the honor roll.

Personal: Born in Fort Worth, Tx. on June 15, 1996...Plans to major in Business Management...Son of Craig and Leslie Snow...Aspires to run his own business after his collegiate soccer career.