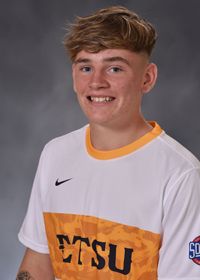 2017: Led ETSU in scoring with five goals and 12 points his freshman year, ranking fifth in the Southern Conference with his quintet of goals...Earned All-Socon second team and all-freshman team honors...Scored his first career goal in dramatic fashion, giving ETSU an overtime win on the road vs. Appalachian State with a golden goal in the 93rd minute...Also forced Mercer into an own goal with an aggressive offensive play to take another road overtime victory in the 99th minute...Finished the season with two assists, both against Wofford in seperate games...Started 14 games with 17 appearances.

Prior to ETSU: Performed at the Monkseaton Football Academy in Newcastle upon Tyne, England under coaches Lee Picton and Graham Fenton...Represented England on the u18 school boys national team…was awarded the Centenary Shield award for scoring three goals in five games from 2016-2017…Trained and played with Sunderland AFC from ages 8-13.

Personal: Born April 25, 1999…Native of Newcastle, England...Son of Michael and Gail Barlow...Intends to major in Marketing at ETSU.