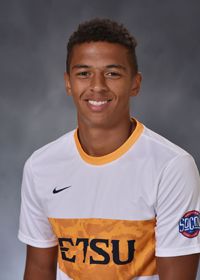 2017: Appeared in seven games for ETSU with 128 minutes played...Scored his first career goal within his first 13 minutes of touching a collegiate pitch...His lone score came in dramatic fashion with a golden goal in the second minute of overtime vs. Lipscomb, leading ETSU to its first win of the season with a 3-2 win in Johnson City...Took two shots from his midfield post, sinking one for a .500 SOG percentage.

Prior to ETSU: Prepped at Franklin Road Academy for four seasons under head coach Chris Price…Scored 20 goals and 12 assists in a breakout senior season…Had 13 goals in his freshman through junior seasons…Was elected as team captain in his junior and senior seasons…All-Region…All-District…All-State…2017 District MVP and Team MVP…Olympic Development Program state team 2011-2016.

Personal: Born on January 6, 1999...From Franklin, Tennessee...Intends to major in Sports Management...Son of John and Sherri Madondo.