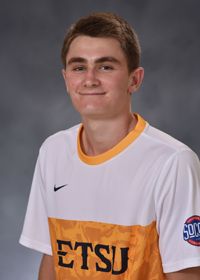 Prior to ETSU: Played at Father Ryan High School in Nashville, Tenn. as a striker and center midfielder for head coach Robin Dieterich...Was named to the 2017 All-Region Team and 2017 All-State Team...Was the leading goal scorer for the Irish in his senior season.

Personal: Born on August 17, 1999...Nashville, Tenn. native...Expects to major in Finance and Real Estate while at ETSU...Aspires to play pro soccer after college…Son of Todd Hellmann and Dana Bonaminio…Kyle’s father was a member of the men’s soccer program at Brown University from 1986-1990.