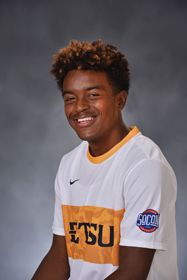 Prior to ETSU: Prepped at Brentwood High School where he lettered thrice in soccer and once in football…Played forward in soccer while serving as a return specialist, wide receiver and defensive back on the football team…Led the team with 16 goals with 10 assists his senior season…Was the 2017 Andrew Clark Offensive Player of the Year…2017 Smoky Mountain Cup Champion while leading the tournament in scoring…All-District…All-State.

Personal: Born on June 13, 1999...From Nashville, Tennessee...Intends to major in History...Son of Dr. Thomas and Heather Williams…Father played football at Johnson C. Smith University from 1991-95.