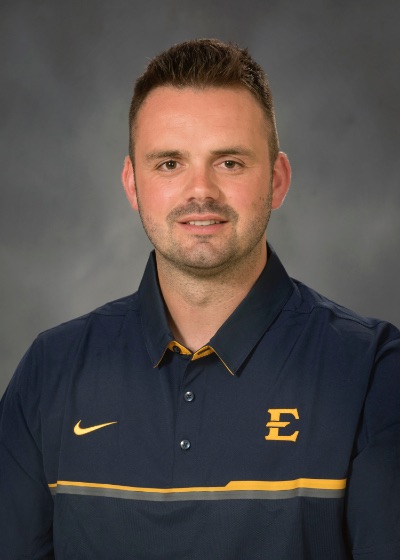 ETSU head men’s soccer coach David Casper announced a new addition to the coaching staff on May 2, 2018 as Josh Scott was hired as the program’s assistant coach. He was promoted to recruiting coordinator on Feb. 8, 2019 and associate head coach on Feb. 18, 2020.

“I am very happy to be able to promote Josh Scott to Associate Head Coach here at ETSU,” Casper said. “Over the last two years Josh has helped me to grow the program and have successful seasons here at ETSU. He has played an integral role in recruiting, coaching, and organization of the program. He has been one of the top coaches in East Tennessee for many years now, and I am happy to see him continue to push his career forward. I look forward to working with Josh in the years to come.”

Scott has numerous ties to the East Tennessee region as a coach and player spaning over a 15 year period. Prior to ETSU, Scott served as the Associate Head Coach and Recruiting Coordinator at Tusculum University.

Scott is heading into his 3rd season on Casper’s staff with an overall record of 17-15-3 and a SoCon record of 8-3-1 which is the highest winning percentage over the first two seasons of each three head coaching eras since the program started in 2008. Scott has been a contributing factor in recruiting as well as stabalizing and solidifying the squad over the transition of the coaching change.

Scott, a native of London, England, has coached at all three NCAA levels spanning over the past decade as a full-time coach. Scott also worked in youth soccer as a full-time director of coaching and head coach for three years, which gives Scott an experienced and well rounded coaching career to date. Scott also has a decade of fulfilling influential coaching and scouting roles within the youth soccer scene where he has coached and scouted youth players for state, regional and national Olympic development teams, major league soccer academies and various youth national teams.

Combined with his passion for youth development, Scott’s experience of fulfilling a range of positions across all NCAA levels from assistant coach, recruiting coordinator, associate head coach and interim head coach has placed him as one of the most experienced and talented assistant coaches in the country. Scott has identified, recruited and worked with players who have represented their country in U19 European Championships, U17 & U20 World Cups and players who have mostly represented their clubs in the top two tiers of youth soccer here in the US and overseas.

The 2019 season proved to be a season full of growth and development after the Bucs averaged six freshman in the starting line up each game. An 8-8-2 overall record and a 4-2 SoCon record saw the Bucs finish third in the SoCon standings where they beat the SoCon tournament champs Mercer University 2-0 in regular season play and were one win away from achieving a two way tie for first place.

The Bucs tackled a challenging 2019 game schedule that saw four opponents punch their ticket to the NCAA tournament where memorable games against top-20 nationally ranked C-USA and ACC opponents Marshall, Kentucky and NC State tested a young but resilient Buccaneer squad who proved their worth against some of the best teams in the country.

2019 quickly became a season that tested the depth of the squad as an injury plague became a continuous obstacle for the Bucs, however four players achieved all-conference accolades and the Bucs ended the season as the statistical leader in four different defensive categories. This resulted in a stellar defensive record overall for the Bucs where Scott was given a lead role in working on the defensive side of the ball throughout the season. Merveil Blilomba highlighted the Buccaneer defense with a First Team All-SoCon selection, while goalkeeper Josh Perryman joined him on the first team as well as receiving Goalkeeper of the Year honors.

The 2019 freshman class brought in under direction of Scott grabbed 20 of the 22 goals and 12 of the 15 assists in the 18-game season. The Bucs had two freshman break the record for most goals scored as a freshman in program history, Hauk Andreas Fossen netting eight while Kieran Richards scored six goals on the year.

The Bucs achieved a team-GPA of 3.54 in the fall of 2019, the second-straight semester achieving a 3.50 or higher while exceeding the 3.0 mark every time since the arrival of the staff.

The 2018 season proved to be a positive and nationally-recognized first season for Scott as the Bucs finished with a 9-7-1 overall record and a 4-1-1 record in the SoCon for a second place finish. The Bucs were ranked as high as No. 18 in the national RPI rankings — the highest in program history — and as high as No. 2 in strength of schedule — the highest in program history.

After placing second in the SoCon in 2018 and beating the 2018 regular season champion Mercer, 2-1, in the last game of the season, the Bucs fell in overtime to Furman in the conference tournament semi-finals but the season proved to be a successful one though as ETSU placed seven players on all-conference teams and led the SoCon in national RPI rankings all season long.

The 2018 schedule also proved to be a challenging one as the game schedule saw the Bucs face six opponents that achieved post-season play, including NCAA Sweet 16 participants, Lipscomb University, who the Bucs beat, 3-1, in regular season play. ETSU also faced ACC and C-USA powers UNC, Wake Forest and Kentucky, as all three programs were ranked in the top five nationally in 2018. The Buccaneers ended the 2018 season with a No. 43 national RPI ranking and just missed out on a post-season NCAA at-large bid.

Prior to ETSU, Scott was the associate head coach and recruiting coordinator at Tusculum University and helped lead the Pioneers to a 34-26-11 record and a 22-12-7 mark in South Atlantic Conference play in two separate stints in 2011 and 2015-17. Under Scott's and Allen Vital's watch, Tusculum earned two 2nd place league finishes, a SAC tournament title and a bid to the NCAA Division II national championships. Scott and the pioneers earned multiple #1 regional rankings, top-10 regional rankings, top-25 national rankings and multiple top-10 national rankings along the way- as high as #7 while knocking off nationally ranked opponents each year. Scott’s 2015, 2016 and 2017 recruiting classes at Tusculum won two SAC championships and had two automatic bids to the NCAA national championships in 3 seasons {2016, 2018}, his recruiting network, eye for talent and memorable wins over #19 Wingate University in 2015, an overtime win versus the reigning 2015 national champions- #6 Pfeiffer University in 2016 and two ties versus #11 Young Harris and #13 Lincoln Memorial in 2017 helped place Tusculum among NCAA DII’s elite.

Prior to Tusculum, Scott was previously at Division I Member Longwood University for a short stint to work for 2013 Big South Coach of the Year Jon Atkinson. While at Longwood, Scott served as the top assistant coach and recruiting coordinator and was responsible for all aspects of the day-to-day operations of the program. Longwood faced off against ACC powers Pittsburg and Virginia Tech and had memorable showdowns with Navy and UNCG to top off a challenging game schedule. Scott and the Lancers finished mid-table in the Big South Conference in 2014 which proved to be a rebuilding year for the Lancers.

Prior to Longwood, he served as the co-founder and director of coaching for the U9-U20 teams at the Knoxville Soccer Academy for three years from 2011-2014 alongside executive coach and director Derek Broadley. Scott was given the responsibility of being the main scouting contact in Tennessee by former MLS and USMNT staff coach Peter Mellor for the United Soccer Leagues in identifying players for the national identification camps for the ODP and U.S youth national team programs held at IMG Academy in Bradenton, FL.

In 2013 as head coach, Scott guided the Knoxville Soccer Academy’s U17/18 girl’s squad to winning the USL Super Y U17/18 South Atlantic Conference Championship and a runner-up finish at the Super Y North American Finals. In 2012 Scott also led the clubs USL Super U20 squad as head coach to winning the 2012 USL Super U20 Men's South Atlantic Conference Championship and a berth to the Super U20 North American Finals at IMG Academy playing the likes of Major League Soccer outfit Chicago Fire U20.

From 2011-2013, Scott was also the assistant coach and recruiting coordinator for the Knoxville Force, a semi-professional soccer team that competed on the national stage within the National Premier Soccer League which is the 4th tier of professional soccer on the US soccer pyramid.

Furthering his familiarity to the East Tennessee area, Scott earned his first full-time collegiate coaching position at Emory & Henry College in 2010 as the assistant men’s soccer coach and shortly after as interim head coach. Wasps competed in arguably the toughest NCAA DIII conference in the country, the Old Dominion Athletic Conference facing off against NCAA DIII powerhouses Roanoke, Virginia Wesleyan and the 2010 national runner-up University of Lynchburg.

As a player, Scott played his first two seasons of college soccer at Hiwassee College, an NJCAA affiliate at the time. He later transferred to Milligan College to finish his collegiate career, where he stepped in as team captain in 2009 and earned All-Appalachian Athletic Conference honors. He also led the program to the 2009 AAC Championship and helped the Buffaloes receive votes for national rankings along the way.

Scott enjoyed two seasons, 2009 & 2010 as a regular starter playing professional soccer with, at the time, the country’s most successful NPSL club- Chattanooga Football Club. He helped CFC win the 2010 Southeast Conference Championship and also helped lead them to the 2010 NPSL National Championship game. Scott also played for the Fort Wayne Fever of the professional development league in 2008 which is now known as USL league 2 where he teamed up with a number of current Major League Soccer players.

Scott’s playing career has taken him to three different countries as a college player, semi-professional and professional soccer player where his career highlight was being a member of the Hucknall Town squad at aged 18 where at the time the Conference North club played in the FA Trophy final on Sky Sports 1 against Grays Athletic at Premier League stadium Villa Park in 2005.

Scott is currently a national course assessor for United Soccer Coaches and holds his Premier, Advanced National and Director of Coaching Licenses from the world's largest soccer organization, United Soccer Coaches - formerly known as the National Soccer Coaches Association of America. He’s also working on his UEFA B International License with the Irish Football Association which is one of three highest ranked licenses in the world. Scott has also completed the Level 1 & 2 coaching qualifications with the English F.A and is NSC First Aid, CPR and AED certified.

After graduating from Milligan College in May 2010, Scott received his Bachelor of Science degree in human performance and exercise science with an emphasis on physical education. Scott pursued his master’s degree in Talent Development at Tusculum University in 2017.