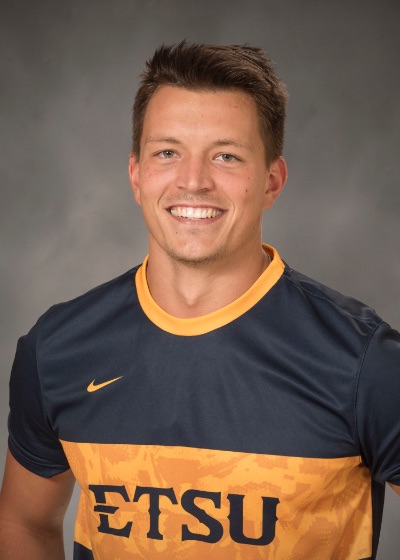 2019: Fought off injuries in his redshirt-senior campaign to earn 11 starts on 13 appearances...captained the Bucs while playing in 926 minutes for the Bucs...tallied three shutouts against VMI (Oct. 19), Mercer (Oct. 22) and Belmont (Oct. 29) as a center back...recorded three shots and one shot on goal...appeared on the SoCon Honor Roll...recipient of the Southern Conference Commissioner's Medal.

2018: Played and started in a career-high 15 games, earning second team all-SoCon honors as a center back...Played in 1,375 minutes for the Bucs — the second highest total among ETSU's outfield players...Scored his only goal of the season against Mercer just over two minutes into the contest, helping ETSU defeat the SoCon regular season champions in a 2-1 win...Recorded his only assist in a 3-1 win against Lipscomb...Took five shots with one on goal...2018-19 Southern Conference honor roll selection and academic all-conference selection.

2017: Appeared in 12 games with one start in ETSU's first win of the season vs. Lipscomb, returning from injury...Saw extensive time as a reserve at right back, logging 56 minutes at UNCG, a full 45-minute half vs. VMI and 46 minutes vs. Mercer...2017-18 Southern Conference honor roll.

2016: Started and played in one game, which was last year's season opener against High Point...Scored a goal with his only shot on the season for a 1.000 shot percentage and shot on goal percentage...Totaled 49 minutes for the game and the season...2016-17 Southern Conference honor roll.

Prior to ETSU: Graduated from Science Hill HS in 2015...Four year starter as a defender and utility player under head coach Brandon Kind...2015 team captain for the Hilltoppers...In 2014, Science Hill posted a 21-1-1 record with Lucchesi starting on defense...In 2013 and 2014, he was awarded the regional defensive player of the year...2013 All-District defensive player of the year...On honor roll for three years in high school.

Personal: Born in Johnson City, Tenn. on April 27, 1997...Expects to major in Exercise Science while at ETSU...Son of John and Kris Lucchesi...His father played tennis at ETSU for four years...Career ambitions of being a professional soccer player or working in physical therapy or athletic training.