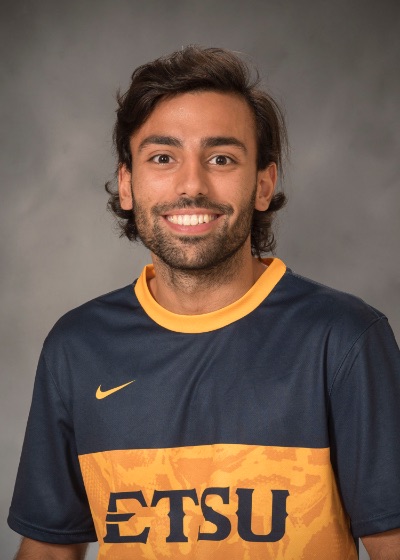 2019: Named to the All-SoCon Preseason Team, Andrade struggled with nagging injuries that kept him off the field until mid-September...the Brazilian showed his class in his season debut against Presbyterian with a dazzling run that earned a penalty, tucking it away himself in a 3-0 rout...Andrade finished with just one start on six appearances after suffering yet another injury that kept him out the majority of the second-half of the schedule...appeared on the SoCon Honor Roll...recipient of the Southern Conference Commissioner's Medal.

2018: One of five ETSU players to start in all 17 games for the Bucs...Had four goals and tied for a team-best three assists for 11 points...Earned first team all-conference honors for the second season in a row...Scored the game-winning goal against Georgia Southern while also scoring against Lipscomb (3-1 win), High Point (3-2 loss) and VMI (4-0 win)...Assisted on the game-winning goal against Liberty in the 99th minute of overtime, while also recording assists in conference play at UNCG and Mercer...2018-19 Southern Conference honor roll selection and academic all-conference selection.

2017: Played in 18 games with 17 starts...Named to the All-SoCon first team as a forward...Led the Bucs with five assists in his debut season donning the blue and gold uniform...Also led ETSU with a .480 shot on goal percentage among players with at least 13 shots, putting 15 of 31 shots on target...Scored his first goal with ETSU at VMI by finishing off a double-assist from Serge Gomis and Fletcher Ekern, the only double-assist of the season for ETSU...2017-18 Southern Conference honor roll.

Prior to ETSU: Transferred from Carson-Newman University…Started two games with one goal as a sophomore before an injury cost him the rest of the year…Was a 2015 South Atlantic Conference Honorable Mention as a freshman...Appeared in 19 games with 12 starts and 1216 minutes on the pitch for the Eagles...scored three goals and five assists...Nailed the team's only goal in the 2015 NCAA Men's Soccer Championship against Limestone...Took 33 shots with 14 on goal for a .424 SOG percentage.