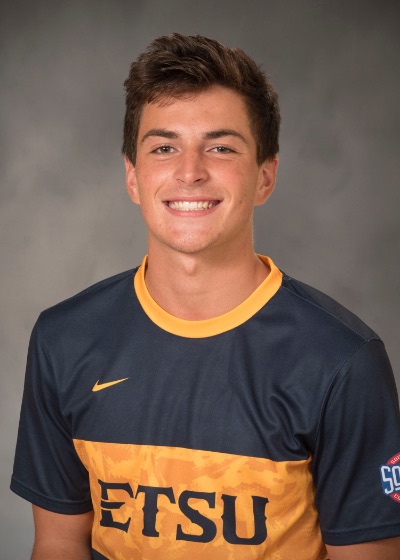 Spring 2021: Made 10 appearances and eight starts in the attack for the Buccaneers...recorded an assist on his season debut at Lipscomb (Feb. 13)...took nine shots on the season, three being on target...posted a season-high three shots in the 7-0 win against VMI (March 30)...played a season-high 98 minutes in the 0-0 draw at UNCG (April 3)...named to the SoCon Honor Roll, the SoCon All-Academic Team and was awarded the Commissioner's Medal.

2018: Appeared in two games as a sophomore...scored two goals in exhibition action against Campbellsville, helping ETSU overcome a 4-1 deficit with two goals in a come-from-behind 5-4 victory on Aug. 15....2018-19 Southern Conference honor roll selection.

2017: Appeared in six games off the bench for ETSU as a freshman...Recorded two assists in 83 minutes of action...First collegiate point came in a 5-0 victory at VMI, setting up Richmond Taylor for the game's final goal...Nearly repeated the exact same scenario vs. VMI in Johnson City two weeks later, assisting Taylor on ETSU's final goal in the 87th minute of a 4-0 win...2017-18 Southern Conference honor roll.

Personal: Born October 30, 1998...a Knoxville, Tenn. native…Son of David and Debbie Denton…Intends to major in Business at ETSU…Josh’s Sister, Liz Denton, is a senior goalkeeper for Trevecca-Nazarene University and led her conference last season in shutouts.