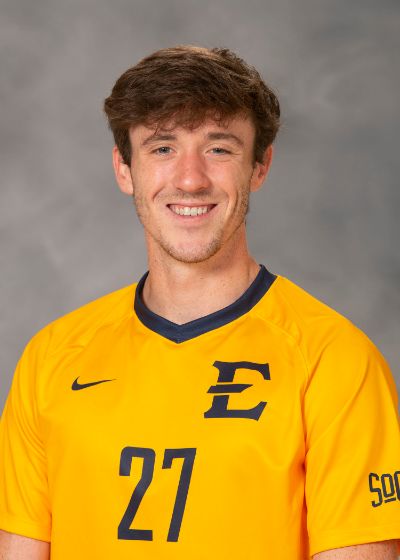 2019: A mainstay in the starting 11 in his final season, Parker started in all 18 matches on the year...one of six players to record more than 1400 minutes on the season, never playing less than 45 minutes in a contest...recorded his only points of the season in his final game at Summers-Taylor Stadium, grabbing an assist for Hauk Andreas Fossen in the eventual 2-1 win over Wofford (Nov. 2)...recorded 27 shots on the season, including a season-high five shots against the Terriers, including one that rifled off the side post...leaves ETSU as one of the all-time appearance leaders with 75 total appearances in his career.

2018: Appeared in all 17 games with three starts...Finished with one goal and three assists on the season...Accounted for three points against No. 1 Wake Forest, scoring ETSU's first goal of the season before assisting another in a 4-2 loss...Assisted both game winning goals against Appalachian State (1-0) and Mercer (2-1)...Took 23 shots with four shots on goal...2018-19 Southern Conference honor roll selection and academic all-conference selection.

2017: Played in 15 games with four starts, logging 687 minutes for the Bucs...Finished the season with two goals and one assist, making the scoresheet three games in a row...Scored the game-winning goal within the last 10 minutes at UNCG, receiving a pass from Ben Holt and volleying it past the goalkeeper off his right foot to secure a momentum-building 2-1 win Oct. 14...Scored in the third minute of a 1-1 draw at Furman...Assisted Danny Barlow on a goal in a 4-0 win vs. VMI...Took seven shots vs. the Keydets, the most of any ETSU player in a single 2017 game...Finished with 21 shots and eight shots on goal.

2016: Appeared in 20 games with 10 starts...Recorded 976 minutes on the pitch...Tallied one assist on the season, which came in the Bucs' home opener against George Mason in a 4-2 victory...attempted 12 shots with two on target...2016-17 Southern Conference honor roll selection...Academic all-conference selection.

2015: Season shortened due to injury...Played in five games...Saw most playing time off the bench at Appalachian State with 61 minutes...Totaled 213 minutes in freshman campaign...Scored his first collegiate goal on Sept. 5 at Radford where he also took a season high in shots (4) with two on goal.

Prior to ETSU: Graduated from St. Benedict at Auburndale in 2015...Played for the Lobos Rush out of Memphis, Tenn...His team finished third in the regional tournament...Was his team's leading goal scorer under coach Robbie Nicholson.

Personal: Native of Memphis, Tenn...Majoring in Nursing at ETSU.