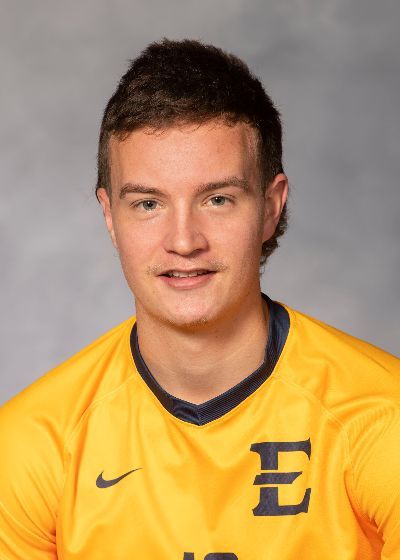 Fall 2021: Named to the Socon All-Academic Team … SoCon Honor Roll member … Started 13 matches, logging 1,075 minutes on the pitch … Finished the season with one goal, three assists, five points, 36 shots and 13 shots on goal … Scored his one goal against Marshall on Sept. 7 … Dished out two assists in the 3-3 draw over Lipscomb on Sept. 10 … Had one assist in the 4-2 win over Radford on Sept. 4 … Tallied a season-high six shots in the scoreless draw over Mercer on Sept. 25 … Played the entire match in four of the 13 contests.

Spring 2021: Selected to the Second Team All-SoCon squad, making eight starts and nine appearances on the season...recorded two assists on the year, recording the second most shots on the team with 20...put up six shots in both the draw against VCU (Feb. 27) and the win against VMI (March 30)...recorded his first assist of the season in the narrow defeat in double overtime to Furman (March 12)...recorded an assist in the 7-0 rout over the Keydets...named to the SoCon Honor Roll, the SoCon All-Academic Team and received the Commissioner's Medal.

2019: Flashed his talents despite being a freshman by making 13 starts in 13 appearances...named to the All-SoCon Freshman Team and All-SoCon Second Team in his collegiate debut...scored the opener at Old Dominion (Sept. 2) through a penalty in a 3-2 win...scored a season-high three points in the 3-0 win against Presbyterian (Sept. 17) with a goal and an assist...grabbed his second assist against High Point (Sept. 21) in a 2-0 win...scored the opener against Georgia State (Sept. 28) in a 2-2 draw...recorded goals in back-to-back games at VMI (Oct. 19) and against Mercer (Oct. 22)...scored the game-winner against Wofford (Nov. 2) just two minutes into overtime in a 2-1 contest...finished his rookie season with six goals and two assists, recording the second-most goals scored by a freshman in Buccaneer history, held by his freshman counterpart Hauk Andreas Fossen...appeared on the SoCon Honor Roll.