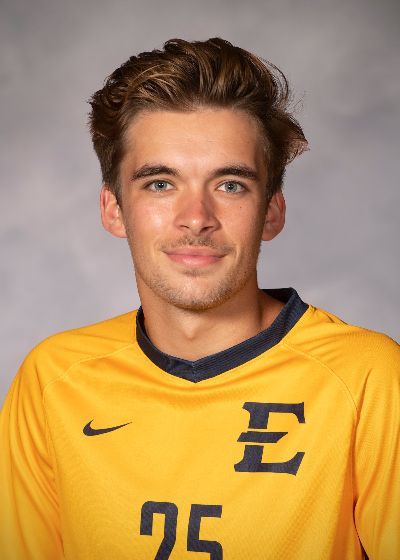 Fall 2021: Named to the Socon All-Academic Team and received SoCon Commissioner’s Medal … SoCon Honor Roll member … Played in 13 matches, with four starts … Logged 630 minutes … Finished with one goal, two points, eight shots and four shots on goal … Scored first collegiate goal in the 4-2 win over Radford on Sept. 4 … Tallied two shots in the 3-3 draw vs. Lipscomb on Sept. 10 and two more on Oct. 16 in the 3-0 win at VMI … Played all 90 minutes vs. UNCG on Oct. 30.

Spring 2021: Slowly made the left side of defense his own on the season, making eight starts with 10 appearances...played every minute in five different matches for the Bucs, including all three 110 minute draws on the season...produced an asisst in the 7-0 win against VMI (March 30)...named to the SoCon Honor Roll and the SoCon All-Academic Team.

2019: Sitting behind Austin Bihlmeyer, Carroll made seven appearances and two starts on the year...recorded his debut against Presbyterian (Sept. 17)...earned his first start and played all 110 minutes against Appalachian State (Oct. 1) in the 1-1 double-overtime contest...played all 90 minutes against #19 Kentucky (Oct. 5)...appeared on the SoCon Honor Roll...recipient of the Southern Conference Commissioner's Medal.

Prior to ETSU: Graduate of Rossview High School...helped Rossview to back-to-back Region Championships and state qualifiers in 2018 and 2019, earning All-Area and All-State accolades...tallied 72 goals and 42 assists in his career...All-District member in 2017, 2018 and 2019.

Personal: Born May 22...son of Larry and Leigh-Anna...pursuing a biology major at ETSU.